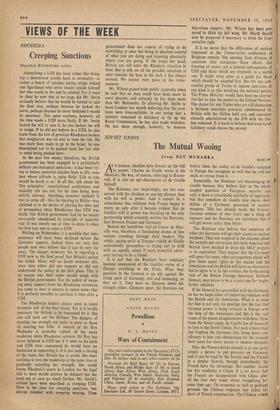 Advertising a UDI has been rather like bring- ing a determined suicide back to normality—or rather a bunch of suicides taking refuge behind one figurehead who never meant suicide himself but who could in the end be pushed. For it must be clear by now that at no stage did Mr. Smith seriously believe that he would be forced to take the final step, perhaps because he lacked the nerve, perhaps because he never believed it would be necessary. This same wariness, however, all the time made a UDI more likely. If Mr. Smith lacked the will to take it, he also lacked the will to resign. If he did not believe in a UDI, he also knew from the fate of previous Rhodesian leaders that resignation was no way to stem the tide. He was more than ready to go to the brink; he was determined not to be pushed back but less able to resist being pushed over.

In the past few weeks, therefore, the British government has been engaged in a particularly delicate psychological operation: it has been try- ing to induce potential suicides back to life, even men whose attitude is, quite flatly, 'Life to you would be death to us.' In all this, talk about the `five principles,' constitutional conferences and majority rule has not, for the time being, been

strictly relevant. Anything, however unlikely it was to come off—like the meeting in Malta—was clutched at in the device of playing for time and of persuading white Rhodesians that UDI was death. The British government had by no means necessarily abandoned its principle of majority rule. It was merely out of time to stress it when the first task was to avert a UDI.

Writing on Wednesday, it is posSible that inde- pendence will have been declared before the Spectator appears. Indeed there are very few people now who believe that it can be very far away. The danger, however, lies in regarding a UDI now as the final proof that Britain's policy has failed. Many will no doubt welcome this, since they either did not support or did not understand the policy in the first place. This is no reason why their views should weigh with the British government. For the policy of wean-

ing away support from the Rhodesian extremists has come so near to success in recent weeks that it is perfectly possible to continue it even after a UDI.

The Rhodesian leaders almost seem to enjoy dramatic talk of the final break. Yet it is hardly necessary for Britain to be impressed by it. She can still hold out the lifelines. The dangers of reacting too strongly are quite as great as those of reacting too little. A remark of Sir Roy Welensky is probably typical of the more moderate white Rhodesian opinion. Sir Roy has never believed in UDI but if it went to the push and UDI were announced he would have no hesitation in supporting it. It is just such a closing of the ranks that Britain has to avoid. She must continue to woo the moderates at the same time as gradually unveiling her strength. She could freeze Rhodesia's assets in London (as the legal title to them would anyway be defunct) but she need not at once go much further. Mr. Smith's actions have been described as creeping UDI. Now is the time for creeping sanctions, but always coupled with creeping wooing. Firm government does not consist of trying to do everything at once but being in absolute control of what you are doing and knowing absolutely where you are going. If she keeps her head, Britain can still solve the Rhodesia situation in time. But to pile on all the possible sanctions at once remains the leap in the dark it has always seemed. We cannot even guess at the conse- quences.

Mr. Wilson gained wide public sympathy when he said that no man could have done more to avert disaster, and certainly he has done more than Mr. Bottomley. In allowing Mr. Smith to leave London last month believing that the posi- tions were irreconcilable, in not seeing that a minister remained in Salisbury to tie up the Royal Commission, he has also made mistakes. He has done enough, however, to deserve

bipartisan support. Mr. Wilson has been pre- pared to ditch his left wing. Mr. Heath should now be prepared if necessary to ditch the Con- servative right.

It is no secret that the differences of opinion expressed at the Conservative conference at Brighton remain. The ensuing Tory division of sanctions into categories—those which, like freezing of assets, are a natural consequence of UDI and those which are imposed—is a useful one. It might even serve as a guide for those which should be adopted first. But for any sub- stantial group of Tories to oppose sanctions of any kind is to risk wrecking the national policy. The Prime Minister would then have no alterna- tive but to take the matter to the United Nations. The choice for any Tories who are still doddering is between sanctions precisely administered by Britain with the lifeline held out, and sanctions clumsily administered by the UN with the life- line removed. It is hard to believe that even Lord Salisbury could choose the second.