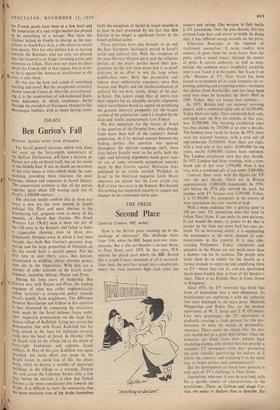 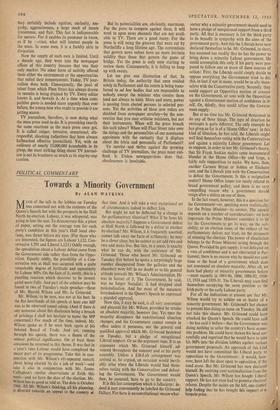 How is the British press standing up to the challenge of television? The challenge dates from 1946. when the BBC began post-war trans- missions. But it did not become a serious threat to Fleet Street until 1955. In that year, ITA entered the placid pool where the BBC floated like a torpid Crusoe, monarch of all it surveyed. Since then, the pool has turned into a maelstrom, where the rival networks fight each other for

viewers and ratings. One weapon in their battle is TV journalism. Over the past decade, this has evolved from bow and arrow to bomb. In doing that, it has inflicted savage wounds on the press.

Television flourishes at the expense of traditional journalism. It turns readers into viewers. It gives them the news faster than the press, with a visual impact beyond the power of print. It carries authority, as well as mag- netism; the common man's credibility yardstick now is not 'I saw it in the paper,' but 'I saw it on telly.' Because of TV, Fleet Street has been forced to re-examine all its stock formulas for re- porting, selecting and presenting events—formulas that derive from Northcliffe, and that have been used ever since he launched the Daily Mail in 1896. Today, they are losing their potency.

Contrast those totals with the figures for TV. over the past decade. There are in Britain approximately 15,000,000 households. In 1954, just before the ITA pike entered the pool, the number with TV licences was 3,250,000. Today, it is 13,500,000. No newspaper in the history of mass journalism has ever soared so high.

With a mass audience that is getting close to 100 per cent, TV journalism does 'not need to follow Fleet Street. It can make its own patterns. It can mould the news; its power to do that is greater by far than any press lord has ever en- joyed. To an increasing extent, it is supplanting the newspapers as the main channel of com- munications in this country. It is also side- tracking Parliament. Today, statements and speeches in the House are not much more than a dummy run for its cameras. The people who make them do so simply for the record, as a formal prelude to repeating and amplifying them on TV—where they can be, and are, questioned much more frankly than in front of the Speaker's chair. There is no Erskine May in Lime Grove or Kingsway.

Since 1955, the TV interview has lifted that form of journalism into a new dimension. Its practitioners are exploiting it with the authority that once belonged to the mass press. Malcolm Muggeridge and Robin Day are the modern equivalents of W. T. Stead and T. P. O'Connor. Like their prototypes, the TV interviewer is gradually creating a fresh pattern for the pre- sentation of news by means of personality- exposure. There seems no reason why the pro- cess should not go a great deal further. Once the networks are freed from their present legal swaddling-clothes, why should they not provide a complete TV newspaper every day—presenting the news visually, questioning the makers of it before the cameras, and analysing it in the same way as leader-writers and commentators?

But the development of visual news patterns is only part of TV's challenge to Fleet Street.

Journalism, wherever it may be practised, calls for a specific cluster of characteristics in the

practitioner. These, as Gibbon said about Cor- sica, are easier to deplore than to describe. But

they certainly include egotism, curiosity, em- pathy, aggressiveness, a large stock of innate irreverence, and flair. This last is indispensable for success. For it enables its possessor to know, as if by i istinct, what will interest people in the mass. In some men, it is a faculty akin to divination.

Now the supply of such men is limited. Until a decade ago, they went into the newspaper offices of this country because that was their only market. No other form of activity offered them either the environment or the opportunities that suited their temperaments. Today, TV jour- nalism does both. Consequently, the pool of talent from which Fleet Street has always drawn its recruits is being drained by TV. Every editor knows it, and bewails it. At a time when com- petitive gusto is needed more urgently than ever before, the young men who ought to provide it are getting scarce.

TV journalism, therefore, is now doing what the mass press used to do. It is provoking exactly the same reactions as the mass press once got. It is called vulgar, intrusive, sensational, dis- respectful, shocking (adjectives that have always hallmarked effective journalism). Yet, with an audience of nearly 15,000,000 households in its grasp, the most striking thing about TV journal- ism is not its brashness so much as its step-by-step caution. But its potentialities are, obviously, enormous. For the press to compete against them, it will need to open news channels that are not avail- able to TV. There are a good many. For the press is still using the grooves that were cut by Northcliffe a long lifetime ago. The conventions that govern news values have no more intrinsic validity than those that govern the game of bridge. Yet the press is only now starting to review them. Consequently, it is failing to keep up with events.

Let me give one illustration of that. In Britain today, the authority that once resided solely in Parliament and the courts is being trans- ferred to ad hoc bodies that are responsible to nobody except the minister who creates them (and not always to him). More and more, power is passing from elected persons to selected per- sons. Yet the activities of these new rulers are shielded from newspaper scrutiny—by the con- vention that you may criticise ministers, but not their instruments. When will the press breach this tacit taboo? When will Fleet Street rake over the doings and the personalities of our nominated appointees with the curiosity that it displays about the trivia and personalia of Parliament?

To survive and thrive against the growing challenge of TV journalism, the press must out- flank it. Unless newspaperdom does that, obsolescence is inevitable.