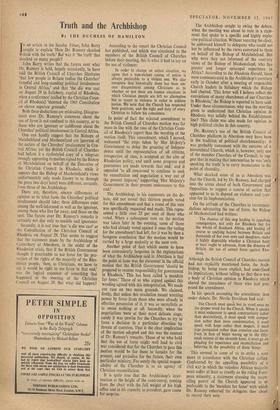 By THE DUCHESS OF HAMILTON

TN an article in the Sunday Times, John Barry "sought to explain 'How Dr. Ramsey shocked Britain with the truth.' But was it 'the truth' that shocked so many people?

John Barry writes that the furore over what Dr. Ramsey is held, largely mistakenly, to have told the British Council of Churches illustrates 'that few people in Britain realise the Churches' forceful and long-standing political involvement in Central Africa,' and that 'the die was cast on August 29 in Salisbury, capital of Rhodesia, when a conference' (called by the Christian Coun- cil of Rhodesia) 'damned the 1961 Constitution on eleven separate grounds.'

Both these deductions are misleading. Disagree- ment over Dr. Ramsey's statement about the use of force is not confined to this country, or to those who are ignorant or indifferent about the Churches' political involvement in Central Africa. One can hardly suggest that the Bishops of Matabeleland and Mashonaland are ignorant of the nature of the Churches' involvement in Cen- tral Africa; yet the British Council of Churches had before it a cyclostyled copy of a telegram strongly approving its motion signed by the Bishop of Matabeleland on behalf of the Executive of the Christian Council in Rhodesia, while it appears that the Bishop of Mashonaland's views (unfortunately only made known to us through the press two days later) were different, certainly, from those of the Archbishop.

There are, therefore, sincere differences of opinion as to what form the Churches' political involvement should take; these differences exist among the well-informed as well as the ignorant, among those who live far away, and those on the _ spot. The furore over Dr. Ramsey's remarks is certainly not due only to muddle and ignorance. Secondly, it is not true that 'a die was cast' at the Consultation of the Christian Council of Rhodesia on August 29. This seems to suggest that the statement made by the Archbishop of Canterbury at Aberdeen, in the midst of the Rhodesian crisis, that if the British Government thought it practicable to use force for the pro- tection of the rights of the majority of the Rho- desian people, 'then, as Christians, we have to say it would be right to use force to that end,' was the logical sequence of something that happened at the meeting of the Christian Council on August 29. But what did happen? According to the report the Christian Council has published, and which was circulated to the members of the British Council of Churches before their meeting, this is what it had to say on the use of violence:

In order to change an unjust situation, we agree that a non-violent course of action is always preferable to a violent one. We also recognise that historically there has been sin- cere disagreement among Christians as to whether or not there are human situations in which Christian people are left no alternative but to resort to violence in order to achieve justice. We note that the Church has respected both positions, and the right and duty of every Christian to follow his conscience.

In point of fact the rejected amendment to the British Council of Churches motion was far more in line with the tone of the Christian Coun- cil of Rhodesia's report than the wording of the motion itself. This amendment, which I moved, welcomed 'the steps taken by Her Majesty's Government to delay the granting of indepen- dence until the representation of all citizens, irrespective of race, is accepted as the aim of Rhodesian policy, and until some progress and guarantees are made towards that end,' and it appealed `to all concerned to continue to seek by consultation and negotiation a way out of the present impasse,' supporting 'Her Majesty's Government in their present endeavours to this end.'

The Archbishop, in his comments on the de- bate, did not reveal that thirteen people voted for this amendment and that a count of this vote was specifically requested and made. This repre- sented a little over 25 per cent of those who voted. When a subsequent vote on the motion was taken later in the evening, some of those who had already voted against it once (by voting for the amendment) had left, for it was by then a foregone conclusion that the motion would be carried by a large majority at the next vote.

Another point of fact which seems to have been conveniently forgotten in the explanations of what the Archbishop said in Aberdeen is that the point at issue was the statement in the official motion that the British Government 'should be prepared to resume responsibility for government in Rhodesia.' This has been called 'a mandate for force.' Those of us who argued against this wording agreed with this interpretation. We made our case on two main grounds. We claimed, firstly, that unless this resolution meant wresting power by force from those who were already in effective possession of it, it was so unrealistic as to mean nothing at all. Secondly, when the negotiations were at their most delicate stage, surely it was unwise for the Churches to try to force a decision in a particular direction by threats of coercion. That is the clear implication of the motion adopted and this was the context of Dr. Ramsey's remarks. Those of us who hold that the use of force might well lead to civil war considered that for the Churches to pass this motion would be for them to forsake for the present, and prejudice for the future, their own particular ministry. For surely the special respon- sibility of the Churches is as an agency of Christian reconciliation.

It is quite true that the Archbishop's inter- vention at the height of the controversy, coming from the chair with the full weight of his high office and in his capacity as president, gave cause for surprise. The Archbishop sought to swing the debate, when the meeting was about to vote in a state- ment that spoke to a specific and highly explo- sive political situation. Without vacating the chair, he addressed himself to delegates who could not but be influenced by the views conveyed to them on behalf of the Bishop of Matabeleland. But why were they not informed of the contrary views of the Bishop of Mashonaland, who has greater and longer episcopal experience in Africa? According to the Rhodesia Herald, these were communicated to the Archbishop's secretary early in October after a meeting of responsible Church leaders in Salisbury which the Bishop had chaired. 'This letter will I believe reflect the convictions of many churchmen of our Churches in Rhodesia,' the Bishop is reported to have said. Under these circumstances, why was the meeting given to understand that Christian opinion in Rhodesia was solidly behind the Establishment line? This claim was also made for opinion in high political circles in this country.

Dr. Ramsey's use of the British Council of Churches platform in Aberdeen may have been in the tradition of political churchmanship : it was probably consonant with the customs of a hierarchical Church, which is, however, only one of the member Churches of the Council; to sug- gest that in making that intervention he was 'only speaking the truth' is to carry insouciance to the point of absurdity.

What shocked some of us at Aberdeen was that the Church, led by Dr. Ramsey, had charged into the arena ahead of both Government and Opposition to suggest a course of action that appeared to us to depend on violence and coer- cion for its implementation.

On the attitude of the Churches to recommen- dations advocating the use of force, the Bishop of Mashonaland had written:

The chances of this step leading to appalling consequeRces, not only for Rhodesia but for the wholet of Southern Africa, and leading of course to undying hatred between Britain and thousands of her own sons and daughters, make it highly disputable whether a Christian body at least ought to advocate, from the distance of Britain, the use of armed force against Rho- desia.

Although the British Council of Churches motion had not explicitly mentioned force, the Arch- bishop, by being more explicit, had underlined its implications, without telling us that there was a body of Christian opinion in Rhodesia which shared the uneasiness of those who had pro- posed the amendment.

This seemed to some of us to strike a note more in accordance with the Christian calling. Confronted by the appalling possibility of a civil war in which the voiceless African majority must suffer at least as cruelly as the ruling Euro- pean minority, a statement stressing the recon- ciling power of the Church appeared to us preferable to the 'mandate for force' with which Dr. Ramsey exhorted the delegates then about to record their vote.