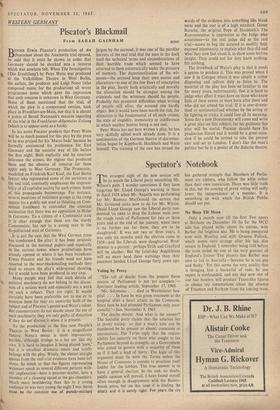 BEFORE Erwin Piscator's production of An Oratorium about the Auschwitz trial opened, he said that it must be shown in order that Germany should be shocked into a remorse which was nowhere felt. When The Investigation ('Die Ermittlung') by Peter Weiss was produced at the Volksbilhne Theatre in West Berlin, the author, the producer and Luigi Nono (who composed music for the production) all wrote programme notes which gave the impression that such remorse is unknown in West Germany. None of them mentioned that the trial, of which the play is a compressed version, took place in Frankfurt-am-Main, nor that it is almost a precis of Bernd Naumann's massive reporting of the trial in the Frankfurter Allgemeine Zeitung (which is to appear soon as a book).

In his notes Piscator predicts that Peter Weiss will be as much panned for this play by the press as he was praised for his `Marat-Sade' because he formally announced his preference for East Germany and the socialist way of life before the first night. Both explicitly and by constant inference the crimes, the regime that produced them and the absence of remorse for them apply only to West Germany. The Prosecutor, modelled on Friedrich Karl Kaul, the East Berlin lawyer who represented some of the survivors at the real trial, constantly emphasises the responsi- bility of all capitalist society for such crimes. Some of this propaganda boomerangs. For instance, several mentions of resistance groups in the camp appear (to a public not used to thinking on Com- munist tramlines) to contradict the constant accusation that there was no opposition to Hitler in Germany. To a citizen of a Communist state it is clear enough that these are the sturdy Communists, but not to a young man in the de-politicised west of Germany.

It is not the case that the West German press has condemned the play; it has been seriously discussed in the national papers and especially in the various towns where productions have already opened or where it has been broadcast. Erwin Piscator and his friends need not have resorted to the near-blackmailing methods they used to ensure the play's widespread showing, for it would have been produced in any case.

Many people may feel that such details of political machinery do not belong in the discus- sion of a serious work and especially not a work on such a subject. They are right. It would certainly have been preferable not to use or to mention them for they are unworthy both of the subject and of Piscator's genius and Weiss's talent. But commentators do not decide about the use of such machinery; they are only guilty of distortion if they do not discuss it when it is present.

To the production at the fine new People's Theatre in West Berlin : it is a magnificent theatre. Nono's music is most impressively terrible, 'although strange to a lay ear like my Own. It is hard to imagine it being played 'pure,' but it is excellent dramatic music and totally belongs with the play. Wisely, the almost straight quotes from the real trial evidence have been left alone. So much so that the figures representing witnesses speak as several different persons with- out explanation—here a prisoner-doctor, here a member of a cleaning squad at the gas chambers. Much more bewildering than this to a young audience (it was very young the night I was there) must be the constant use of pseudo-military jargon by the accused; it was one of the peculiar horrors of the real trial that the men in the dock used the technical terms and circumlocutions of their horrible trade which seemed to have returned to them automatically under the pressure of memory. The depersonalisation of the wit- nesses—the accused keep their own names and characters—is one of the few flaws of conception in the play. Surely both artistically and morally the alienation should be strongest among the criminals and the witnesses should be people. Probably this presented difficulties when writing of people still alive; the accused can hardly object. But it would have been worth the risk, for alienation is the fundamental of all such crimes, the state of stupidity, immaturity or indifference in which another human being is not real.

Peter Weiss has not here written a play, he has very skilfully edited work already done. It is a continuation of the German theatre of documen- tation begun by Kipphardt, Hochhuth and Weiss himself. The training of the cast has turned the

words of the evidence into something like blank verse and the cast is of a high standard. Dieter Borsche, the original Pope of Hochhuth's The Representative, is impressive as the Judge who sometimes—as the real judge did at the real trial—seems to beg the accused to modify their exposed inhumanity, to explain what they did and what they now feel about it, to show some human insight. They could not for they knew nothing, felt nothing.

The drawback of Weiss's play is that it needs a genius to produce it. This was proved when I saw it in Cologne where it was simply a rather disgusting and tedious duty to listen to. The material of the play has been so familiar to me for many years, unfortunately, that it is hard to judge what effect it must have on those who knew little of these events or were born after them and who did not attend the trial. If it is over-drama- tised or sentimentalised whether by the acting or by lighting or tricks, it could lose all its meaning. Some day a new Dostoievsky will come and write a great play on this subject; for his guidance this play will be useful. Piscator should have his production filmed and it would be a great occa- sion if he could be invited to take the present cast and set to London. I don't like the man's politics but he is a genius of the didactic theatre.