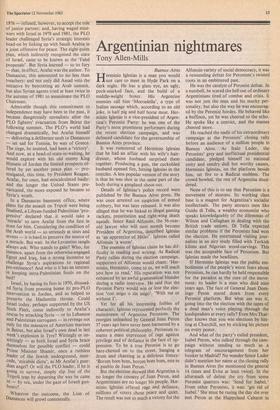 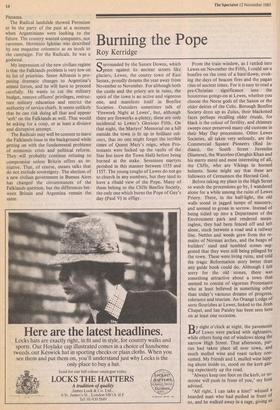 Herminio Iglesias is a man you would knot care to meet in Hyde Park on a dark night. He has a glass eye, an ugly, pock-marked face, and the build of a middle-weight boxer. His Argentine enemies call him 'Mortadella', a type of Italian sausage which, according to an old joke, is half pig and half horse meat. Her- minio Iglesias is a vice-president of Argen- tina's Peronist Party: he was one of the Party's most prominent performers during the recent election campaign, and was defeated candidate for the governorship of Buenos Aires province.

It was rumoured of Herminio Iglesias that he had- an affair with his wife's hair- dresser, whose husband surprised them together. Producing a gun, the cuckolded husband opened fire, hitting Iglesias in the testicles. A less popular version of the story is that he was shot in the same part of the body during a gangland shoot-out.

Details of Iglesias's police record were published by the Buenos Aires press. He was once arrested on suspicion of armed robbery, but was later released. It was also alleged that he was linked to illegal gaming rackets, prostitution and right-wing death sqauds. Senor Raul Alfonsin, the 56-year- old lawyer who will next month become President of Argentina, described Iglesias as 'an apprentice of Hitler'. Iglesias called Alfonsin 'a worm'.

The enemies of Iglesias claim he has dif- ficulty in reading and writing. At Radical Party rallies during the election campaign, supporters of Alfonsin would chant: 'Her- minio, Herminio, come to us, we will teach you how to read.' His reputation was not enhanced by an awful grammatical blunder during a radio interview. He said that the Peronist Party would win or lose the elec- tion 'con migo o sin migo'. 'With me or without I'.

Yet for all his interesting foibles of character, Iglesias represented perfectly the mainstream of Argentine Peronism. The energies unleashed by General Juan Peron 37 years ago have never been harnessed by a coherent political philosophy. Peronism re- mains a mass expression of rage against privilege and of defiance in the face of op- pression. To be a true Peronist is to go bare-chested on to the street, banging a drum and chanting in a delirious frenzy: 'Bar= born born, borom barn born, este es el pueblo de Juan Peron.'

But the election showed that Argentina is no longer the country of Juan Peron, and Argentinians are no longer his people. Her- minio Iglesias offered rage and defiance, millions of voters chose peace and quiet. The result was not so much a victory for the Alfonsin variety of social democracy, it was a resounding defeat for Peronism's twisted roots in an embittered past.

He was the catalyst of Peronist defeat. In a nutshell, he scared the hell out of ordinary Argentinians tired of combat and crisis. It was not just the man and his murky per- sonality, but also the way he was encourag-

ed by the Peronist hordes. He behaved like a buffoon, yet he was cheered to the echo. He spoke like a convict, and the masses cheered more.

He reached the nadir of his extraordinary campaign at the Peronists' closing rally before an audience of a million people in Buenos Aires. As halo Luder, the Peronists' grey and ineffectual presidential candidate, pledged himself to national unity and sundry dull but worthy causes, Herminio Iglesias, on the platform beside him, set fire to a Radical emblem. The crowd howled, the rest of Argentina shud- dered.

None of this is to say that Peronism is a movement of morons. Its working class base is a magnet for Argentina's socialist intellectuals. The party attracts men like Guido di Tella, a wealthy economist who speaks knowledgeably of the dilemmas of Wilson and Callaghan in dealing with the British trade unions. Di Tella expected similar problems if the Peronists had won the election. He entertained visiting jour- nalists in an airy study filled with Turkish kilims and Nigerian wood-carvings. This was the acceptable face of Peronism. But Iglesias made the headlines.

If Herminio Iglesias was the public em- bodiment of the people's worst fears about Peronism, he can hardly be held responsible for the paradox at the core of the move- ment: its leader is a man who died nine years ago. The face of General Juan Dom- ingo Peron stared down from every Peronist platform. But what use was it, going into the the election with the tapes of a dead man's voice playing through the loudspeakers at every rally? Even Mrs That- cher knows that you win elections by hin- ting at Churchill, not by sticking his picture on every poster.

And what of the party's exiled president, Isabel Peron, who sulked through the cam- paign without sending so much as a telegram of encouragement from her bunker in Madrid? No wonder Senor Luder didn't mention her name at the closing rally in Buenos Aires (he mentioned the general 14 times and Evita at least twice). In the aftermath of defeat the cry from some Peronist quarters was: 'Send for Isabel.' From other Peronists, it was: 'get rid of Isabel.' She must be rueing the day she ever met Peron at the Happyland Cabaret in Panama.

The Radical landslide showed Peronism to be the party of the past at a moment when Argentinians were looking to the future. The country wanted computers, not cavemen. Herminio Iglesias was described by one magazine columnist as an insult to the campaign. For the Radicals, he was a godsend.

My impression of the new civilian regime is that the Falklands problem is very low on its list of priorities. Senor Alfonsin is pro- posing dramatic changes to Argentina's armed forces, and he will have to proceed carefully. He wants to cut the military budget, remove officers' privileges, restruc- ture military education and restrict the authority of service chiefs. It seems unlikely that he can risk doing all that and appear 'soft' on the Falklands as well. That would be asking for a coup, or at least a divisive and disruptive attempt.

The Radicals may well be content to leave the Falklands issue in the background while getting on with the fundamental problems of economic crisis and political reform. They will probably continue refusing to compromise unless Britain offers an in- itiative. That, of course, means talks that do not exclude sovereignty. The election of a new civilian government in Buenos Aires has changed the circumstances of the Falklands question, but the differences bet- ween Britain and Argentina remain the same.