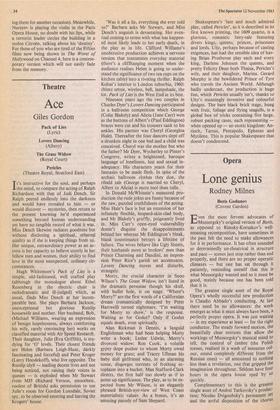 It's instructive for the soul, and perhaps the mind, to compare the acting of Ralph Richardson with that of Judi Dench. Sir Ralph peered endlessly into the darkness and would have revealed to him — or would discover — mysteries, then return to the present knowing he'd experienced something beyond human understanding yet have no tangible record of what it was. Miss Dench likewise radiates goodness but without disclosing a spiritual, ethereal qiiality as if she is keeping things from us. Her unique, extraordinary power as an ac- tress is her capacity to believe utterly in her fellow men and women, their ability to find love in the most unexpected, ordinary cir- cumstances.

Hugh Whitemore's Pack of Lies is a simple, old-fashioned, well crafted play (although the monologue about Ethel Rosenberg in the electric chair is melodramatic and ill-judged) which, as usual, finds Miss Dench at her incom- parable best. She plays Barbara Jackson, unexceptional but glorious Ruislip housewife and mother. Her husband, Bob, (Michael Williams, wearing an expression of benign hopelessness, always comforting his wife, rarely convincing her) works on classified material with Air Speed Research. Their daughter, Julie (Eva Griffith), is stu- dying for '0' levels. Their closest friends are Helen (Barbara Leigh-Hunt, darkly fascinating and forceful) and Peter Kroger (Larry Hoodekoff), who live opposite. The Ruislip idyll — leading decent lives and not being noticed, not raising their voices in queues — is exploded when Mr Stewart from MI5 (Richard Vernon, smoothest, coolest of British) asks permission to use Julie's room for Gordon Lonsdale, Soviet spy, to be observed entering and leaving the Krogers' house. 'Was it all a lie, everything she ever told us?' Barbara asks Mr Stewart, and Miss Dench's anguish is devastating. Her even- tual coming to terms with what has happen- ed most likely leads to her early death, in the play as in life. Clifford Williams's unobtrusive production achieves a nervous tension that transmutes everyday material (there's a cliffhanging moment when the audience realises Helen is going to under- stand the significance of two tea cups on the kitchen table) into a riveting thriller. Ralph Koltai's interior is London suburbia, 1960: chintz settee, wireless, bell, lampshade, the lot. Pack of Lies is the West End at its best.

Nineteen years ago the two couples in Charles Dyer's Lovers Dancing participated in a ballroom competition which George (Colin Blakely) and Alicia (Jane Carr) won as the buttons of Albert's (Paul Eddington) braces were cut and his trousers sank to his ankles. His partner was Cheryl (Georgina Hale). Thereafter the four dancers slept off a drunken night in one bed and a child was conceived. Cheryl was the mother but who the father? Mr Dyer, Wycherley to Pinter's Congreve, writes a heightened, baroque language of loneliness, lust and sexual in- adequacy. His characters yearn for their fantasies to be made flesh. In spite of the archaic ballroom clothes they don, the ribald tale (George is married to Cheryl, Albert to Alicia) is more tool than tulle.

In Donald McWhinnie's measured pro- duction the rude jokes are funny because of the raw, puzzled truthfulness of the acting. Miss Hale's face is but an extension of her infinitely flexible, leopard-skin-clad body, and Mr Blakely's gruffly, poignantly lived in. Miss Carr's open-eyed vulnerability doesn't disguise the disappointments behind her whereas Mr Eddington's bleak, blank countenance betrays a lifetime of failure. The wives behave like Ugly Sisters, their husbands more as brokers' men than Prince Charming and Dandini, an impres- sion Peter Rice's garish set accentuates. Lovers Dancing moves and disturbs, strangely.

Morty, the crucial character in Snoo Wilson's The Grass Widow, isn't listed in the dramatis personae though his skull, with bullet hole, is on stage. 'Where's Morty?' are the first words of a Californian dream (romantically designed by Peter Hartwell) turned nightmare. 'I'm waiting for Morty to show,' is the response. Waiting as for Godot? Only if Godot equals death, even spiritually.

Alan Rickman is Dennis, a languid Englishman who had been helping Morty write a book; Leslee Udwin, Morty's divorced widow; Ron Cook, a volatile gypsy dope pusher to whom Marty owed money for grass; and Tracey Ullman his baby doll girlfriend who, in an alarming scene, disgorges torrents of frothing ec- toplasm into a bucket. Max Stafford-Clark directs, the first half too slowly as if to point up significance. The play, as to be ex- pected from Mr Wilson, is an elegantly phrased British-eye-view of West Coast materialistic values. As a bonus, it's an amusing parody of Sam Shepard.

Shakespeare's 'late and much admired play, called Pericles', as it is described in its first known printing, the 1609 quarto, is a glorious, romantic fairy-tale featuring divers kings, queens, princes, princesses and lords. Ultz, perhaps because of casting exigences, has had the sensible idea of hav- ing Brian Protheroe play each and every king, Darlene Johnson the queens, and pretty Felicity Dean both Thaisa, Pericles's wife, and their daughter, Marina. Gerard Murphy is the bewildered Prince of Tyre who travels the Ancient World. Although badly undercast, the production is huge fun, which Pericles usually isn't, thanks to Ultz's stunningly inventive and colourful designs. The bare black brick stage, hung with fruit, foliage and flying seagulls, is a global box of tricks containing five large, robust packing cases, each representing — when opened up — an exotic kingdom: An- tioch, Tarsus, Pentapolis, Ephesus and Mytilene. This is popular Shakespeare that doesn't condescend.