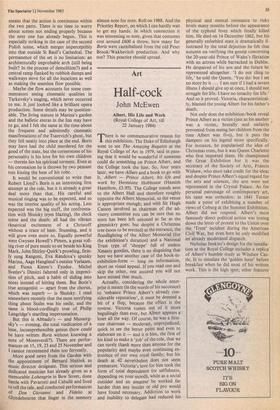 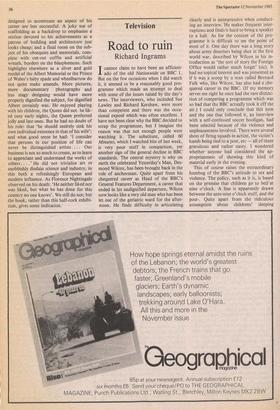 There is no commemorative reason for this exhibition. The Duke of Edinburgh went to see The Amazing Bugattis at the Royal College of Art in 1979, said in pass- ing that it would be wonderful if someone could do something on Prince Albert, and the College took the hint. So, four years later, we have Albert and a book to go with it, Albert — Prince Albert, his life and work by Hermione Hobhouse (Hamish Hamilton, £3.95). The College stands next to the Albert Hall and therefore roughly opposite the Albert Memorial, so the venue is appropriate enough; and with Sir Hugh Casson involved as chairman of the ad- visory committee you can be sure that no stern has been left untoned as far as the gimmickry goes; but despite a Christmas tree (soon to be erected) at the entrance, the floodlighting of the Albert Memorial (for the exhibition's duration) and a National Trust type of `shoppe' full of useless Xmassy goodies, there is no disguising that here we have another case of the book-in- exhibition-form — long on information, short on visual appeal. If you read one and skip the other, rest assured you will not have missed that much.

Actually, considering the whole enter- prise is meant (in the words of his successor) to 'enhance Prince Albert's already con- siderable reputation', it must be deemed a bit of a flop, because the effect is the reverse. Victoria comes out of it more beguilingly than ever, but Albert appears a loser all the way. Of course, he was a first- rate chairman — moderate, unprejudiced, quick to see the better point and even to elaborate on it — and it is him, the first of his kind to make a 'job' of the role, that we can surely thank more than anyone for the popularity and maybe even continuing ex- instence of our own royal family; but his death at 42 nevertheless does not seem premature. Victoria's love for him took the form of total dependence (or selfishness, depending on your mood), while as a social outsider and an amateur he worked far harder than any insider or old pro would have found necessary. Addiction to work and inability to delegate had reduced his

physical and mental resistance to risky levels many months before the appearance of the typhoid fever which finally killed him. He died on 14 December 1862, but his generally enfeebled state is dramatically il- lustrated by the total dejection he felt that autumn on verifying the gossip concerning the 20-year-old Prince of Wales's flirtation with an actress while barracked in Dublin. He despaired of his son and the future he represented altogether. 'I do not cling to life,' he told the Queen. 'You do: but I set no store by it ... I am sure if I had a severe illness 1 should give up at once, I should not struggle for life. 1 have no tenacity for life.' And so it proved. Victoria, characteristical- ly, blamed the young Albert for his father's death.

Not only does the exhibition/book reveal Prince Albert as a victim (just as his mother was a victim, brutally and unfairly prevented from seeing her children from the time Albert was five), but it puts the dampers on his legend more specifically. For instance, he popularised the idea of Christmas trees, but it was Queen Charlotte who first imported them. He championed the Great Exhibition but it was the secretary of the Society of Arts, Francis Wishaw, who must take credit for the idea; and despite Prince Albert's equal regard for the arts and sciences, the arts were not represented in the Crystal Palace. As for personal patronage of contemporary art, his taste was orthodox: in 1841 Turner made a point of exhibiting a number of views of Coburg at the Summer Exhibition; Albert did not respond. Albert's most famously direct political action was toning down the letter of protest to the Union over the 'Trent' incident during the American Civil War, but even here he only modified an already moderated dispatch.

Nicholas Jenkins's design for the installa- tion at the Royal College includes a replica of Albert's humble study at Windsor Cas- tle, lit to simulate the 'golden hour' before breakfast when he did most of his written work. This is the high spot; other features designed to accentuate an aspect of his career are less successful. A joky use of scaffolding as a backdrop to emphasise a section devoted to his achievements as a patron of building and architecture just looks cheap; and a final room on the sub- ject of his obsequies and memorials, com- plete with cut-out coffin and artificial wreath, borders on the blasphemous. Such highlights elsewhere as a silver and gold model of the Albert Memorial or the Prince of Wales's baby spade and wheelbarrow do not quite make amends. More pictures, more documentary photographs and less stagy designing would have more properly dignified the subject, for dignified Albert certainly was. He enjoyed playing with his children, the Queen did not. he lik- ed cosy early nights, the Queen preferred jolly and late ones. But he had no doubt of his role: that 'he should entirely sink his own individual existence in that of his wife'; and what good sense he had: 'I consider that persons in our position of life can never be distinguished artists. .. . Our business is not so much to create, as to learn to appreciate and understand the works of others. . ' He did not trivialise art or snobbishly disdain science and industry, in this both a refreshingly European and modern influence. As Florence Nightingale observed on his death: 'He neither liked nor was liked, but what he has done for this country no one knows'. We still do not; but the book, rather than this half-cock exhibi- tion, gives some indication.