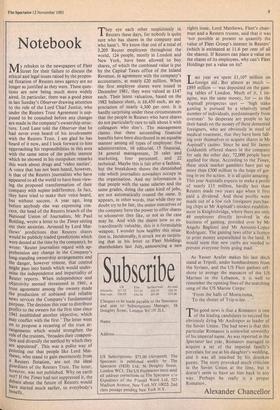 My rebukes to the newspapers of Fleet Street for their failure to discuss the ethical and legal issues raised by the propos- ed flotation of Reuters news agency are no longer as justified as they were. These ques- tions are now being much more widely aired. In particular, there was a good piece in last Sunday's Observer drawing attention to the role of the Lord Chief Justice, who under the Reuters Trust Agreement is sup- posed to be consulted before any changes are made in the company's ownership struc- ture. Lord Lane told the Observer that he had never even heard of his involvement with the Reuters Trust. I am glad he has heard of it now, and I look forward to him approaching his responsibilities in this area with the same sense of the public interest which he showed in his outspoken remarks this week about drugs and 'video nasties'. A voice that has not been heard, however, is that of the Reuters journalists who have appeared to all the world to have been view- ing the proposed transformation of their company with supine indifference. In fact, they have tried to make their voice heard, but without success. A year ago, long before anybody else was expressing con- cern, the head of the Reuters branch of the National Union of Journalists, Mr Paul Bolding, wrote a letter to the Times setting out their anxieties. Aroused by Lord Mat- thews' predictions that Reuters shares would be publicly traded (predictions which were denied at the time by the company), he wrote: 'Reuter journalists regard with ap- prehension any change in the Company's long-standing ownership arrangements and the danger, however remote, that control might pass into hands which would under- mine the independence and impartiality of Reuter reports. When independence and Objectivity seemed threatened in 1941, a trust agreement among the owners made the production of unbiased and reliable news services the Company's fundamental Purpose. The decision this year to distribute profits to the owners for the first time since 1941 established another objective, which MaY conflict with the first.' The letter went on to propose a recasting of the trust ar- rangements which would strengthen the role of the trustees, 'broaden their composi- tion and diversify the method by which they are appointed'. This was a polite way of Pointing out that people like Lord Mat- thews, who stand to gain enormously from a Reuters flotation, are not the ideal ?uardians of the Reuters Trust. The letter, however, was not published. Why on earth hoi? If the Times had not suppressed it, the have about the future of Reuters would have started much earlier, to everybody's benefit. They eye each other suspiciously in 1 Reuters these days, for nobody is quite sure who has shares in the company and who hasn't. We know that out of a total of 3,205 Reuter employees throughout the world, 124 people, mostly in London and New York, have been allowed to buy shares, of which the combined value is put by the Capital Taxes office of the Inland Revenue, in agreement with the company's accountants, at nearly £20 million. When the first employee shares were issued in December 1981, they were valued at £147 each. Their latest valuation, based on the 1982 balance sheet, is £6,450 each, an ap- preciation of nearly 4,300 per cent. It is hardly surprising under these circumstances that the people in Reuters who have shares do not particularly care to talk about it with colleagues who don't, The management claims that these astounding financial benefits have been distributed in an equable manner among all types of employee: five administration, 16 editorial, 15 financial, 34 general management, 28 sales and marketing, four personnel, and 22 technical. Maybe this is fair after a fashion, but the breakdown shows the diminished role which journalists nowadays occupy in the organisation. And my information is that people with the same salaries and the same grades, doing the same kind of jobs, are not automatically treated the same. It appears, in other words, that while they no doubt try to be fair, the senior executives of the company have the power to offer shares to whomever they like, or not as the case may be. And with the shares now so ex- traordinarily valuable, this is a formidable weapon. I wonder how healthy this situa- tion is. Incidentally, it struck me as surpris- ing that in his letter to Fleet Holdings shareholders last July, announcing a new

rights issue, Lord Matthews, Fleet's chair- man and a Reuters trustee, said that it was 'not possible at present to quantify the value of Fleet Group's interest in Reuters' (which is estimated at 11.6 per cent of all the shares). If Reuters can place a value on the shares of its employees, why can't Fleet Holdings put a value on its?

Last year we spent £1,107 million on foreign aid., But almost as much — £893 million — was deposited on the gam- ing tables of London. Much of it, I im- agine, was the same money, for — as the Aspinall prospectus says — 'high stake gaming is pursued by a relatively small number of individuals, predominantly from overseas'. So desperate are people to lay their hands on the money of these demented foreigners, who are obviously in need of medical treatment, that they have been fall- ing over themselves to acquire shares in Mr Aspinall's casino. Since he and Sir James Goldsmith offered shares in the company for sale the other day, 72,000 people have applied for them. According to the Times, these stock market gamblers have put up more than £500 million in the hope of get- ting in on the action. It is all quite amazing. This year Aspinalls expects to make a profit of nearly £15 million, hardly less than Reuters made two years ago when it first paid a dividend. And these profits were made out of a few rich foreigners purchas- ing chips at Mr Aspinall's modest establish- ment in Knightsbridge, where there are only 49 employees directly involved in the business of gaming, presided over by Mr Angelo Baglioni and Mr Antonio-Lopez Rodriguez. The gaming laws offer a licence to print money unparalleled in the land. It would seem that new curbs are needed to prevent everyone from going mad,

As Yasser Arafat makes his last ditch stand at Tripoli, under bombardment from the Syrians, and the US Fleet gathers off- shore to avenge the massacre of the US Marines in the Lebanon, it is well to remember the opening lines of the marching song of the US Marine Corps: 'From the halls of Montezuma, To the shores of Trip-o-lee... '

The good news is that a Romanov is one of the leading candidates to succeed the obviously dying Mr Andropov as leader of the Soviet Union. The bad news is that this particular Romanov is somewhat unworthy of his imperial name. As was reported in the Spectator last year, Romanov managed to acquire a set of the imperial family's porcelain for use at his daughter's wedding, and it was all smashed by his drunken guests. The story provoked much criticism in the Soviet Union at the time, but it doesn't seem to have set him back in any way. Perhaps he really is a proper Romanov.