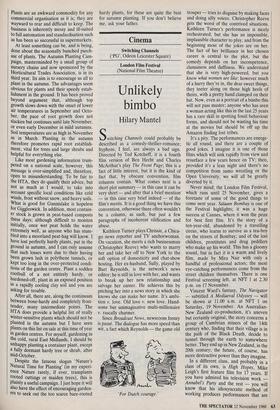 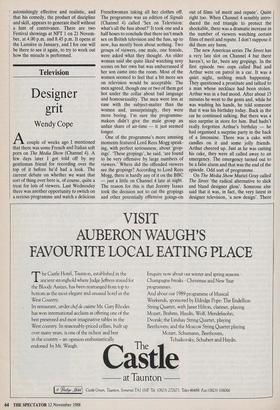 Switching Channels could probably be described as a comedy-thriller-romance; hyphens, I feel, are always a bad sign. Directed by Ted Kotcheff, it is a fourth film version of Ben Hecht and Charles McArthur's play The Front Page; this is a fact of little interest, but it is the kind of fact that, by obscure convention, film columns contain. What comes next is a short plot summary — in this case it can be very short — and after that a brief mention — in this case very brief indeed — of the film's merits. It is a good thing we have this convention, otherwise there often wouldn't be a column, as such, but just a few paragraphs of incoherent vilification and abuse.

Kathleen Turner plays Chrissie, a Chica- go news reporter and TV anchorwoman. On vacation, she meets a rich businessman (Christopher Reeve) who wants to marry her and take her off to New York to the soft option of domesticity and chat-show hosting. Her ex-husband, Sully, played by Burt Reynolds, is the network's news editor; he is still in love with her, and wants to break up her new relationship and salvage her career. He achieves this by pitching her into a news story in which she knows she can make her name. It's ambi- tion v. love. Old love v. new love. Hand- some but unimaginative multi-millionaire v. rascally charmer.

Since Broadcast News, newsroom frenzy is passé. The dialogue has more speed than wit, a fact which Reynolds — the game old

trouper — tries to disguise by making faces and doing silly voices. Christopher Reeve gets the worst of the contrived situations. Kathleen Turner's performance is nicely orchestrated, but she has an impossible, implausible character to play, and from the beginning most of the jokes are on her. The fact of her brilliance in her chosen career is central to the plot, but the comedy depends on her incompetence, clumsiness and daffiness. We understand that she is very high-powered, but you know what women are like: however much of a hurry they're in, the dear sweet things, they teeter along on those high heels of theirs, with a pretty hand clamped on their hat. Now, even as a portrait of a bimbo this will not pass muster; anyone who has seen a woman acting like this in the last 25 years has a rare skill in spotting fossil behaviour forms, and should not be wasting his time at the movies but should be off up the Amazon finding lost tribes.

It's a pity. The performances are energe- tic all round, and there are a couple of good jokes. I imagine it is one of those films which will sink rapidly from view and resurface a few years hence on TV; then, provided it's a lean night and there's no competition from sumo wrestling or the Open University, we will all be greatly diverted by it.

Never mind; the London Film Festival, which runs until 25 November, gives a foretaste of some of the good things to come next year. Salaam Bombay is one of the Festival highlights; it was a huge success at Cannes, where it won the prize for best first film. It's the story of a ten-year-old, abandoned by a travelling circus, who learns to survive as a tea-boy on the streets of Bombay; and of the lost children, prostitutes and drug peddlers who make up his world. This has a gloomy sound, but in fact it is a warm and lively film, made by Mira Nair with only a handful of professional actors; the most eye-catching performances come from the street children themselves. There is one Festival screening left, at NFT 1 at 2.30 p.m. on 17 November. Vincent Ward's fantasy, The Navigator — subtitled A Mediaeval Odyssey — will be shown at 11.00 a.m. at NFT 1 on Saturday, 19 November. An Australian- New Zealand co-production, it's uneven but certainly original; the story concerns a group of Cumbrian miners of the 14th century who, finding that their village is in the path of the Black Death, decide to tunnel through the earth to somewhere better. They end up in New Zealand, in the 20th century; the future, of course, has more destructive power than they imagine. In a different class, and probably in a class of its own, is High Hopes, Mike Leigh's first feature film for 17 years. If you have admired his television work — Annabel's Party and the rest — you will know that his idiosyncratic method of working produces performances that are astonishingly effective and realistic, and that his comedy, the product of discipline and skill, appears to generate itself without a hint of contrivance. There are two Festival showings at NFT 1 on 21 Novem- ber, at 4.00 p.m. and 8.45 p.m. It opens at the Lumiere in January, and I for one will be there to see it again, to try to work out how the miracle is performed.