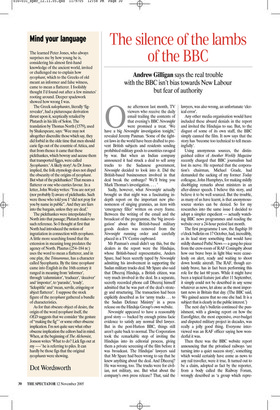 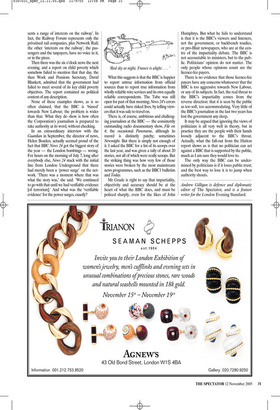 The silence of the lambs of the BBC

Andrew Gilligan says the real trouble with the BBC isn’t bias towards New Labour but fear of authority One afternoon last month, TV viewers who receive the daily email trailing the contents of that evening’s BBC Newsnight were promised a treat. ‘We have a big Newsnight investigation tonight,’ revealed Jeremy Paxman. ‘Some of the tightest laws in the world have been drafted to prevent British subjects and residents sending prohibited military goods to countries ravaged by war. But when an Indian company announced it had struck a deal to sell army trucks to the Sudanese government, Newsnight decided to look into it. Did the British-based businessmen involved in that deal break the embargo? We’ll bring you Mark Thomas’s investigation.... ’ Sadly, however, what Newsnight actually brought us that night was a fascinating indepth report on the important new phenomenon of singing grannies, an item with ‘emergency filler’ written on every frame. Between the writing of the email and the broadcast of the programme, the ‘big investigation’ about the British-based military goods dealers was removed from the Newsnight running order and carefully placed in a TV Centre cupboard.

Mr Paxman’s email didn’t say this, but the dealers in the report were the Hindujas, whose British-based representative, Anders Spare, had been secretly taped by Newsnight admitting his involvement in supporting the Sudan military trucks deal. Mr Spare also said that Dheeraj Hinduja, a British citizen, was very much involved in the deal. In a separate, secretly recorded phone call Dheeraj himself admitted that he was part of the deal’s strategy and structuring. The transaction had been explicitly described as for ‘army trucks ... to the Sudan Defence Ministry’ in a press release on the Hinduja Group’s own website.

Newsnight appeared to have a reasonably good story — backed by enough prima facie evidence to satisfy any normal libel lawyer. But in the post-Hutton BBC, things still aren’t quite back to normal. The Corporation took the remarkable step of inviting the Hindujas into its editorial process, giving them a private screening of the film before it was broadcast. The Hindujas’ lawyers said that Mr Spare had been wrong to say that he knew anything about the deal. And Dheeraj? He was wrong, too. The trucks were for civilian, not military, use. But what about the company’s own press release? That, said the lawyers, was also wrong, an unfortunate ‘clerical error’.

Any other media organisation would have included these absurd denials in the report and invited the Hindujas to sue. But, to the disgust of some of its own staff, the BBC simply canned the film. It now says that the story has ‘become too technical to tell meaningfully’.

Using anonymous sources, the distinguished editor of Another Weekly Magazine recently charged that BBC journalism had lost its nerve. He reported that the corporation’s chairman, Michael Grade, had demanded the sacking of my former Today colleague, John Humphrys, for making mildly disobliging remarks about ministers in an after-dinner speech. I believe this story, and believe it to be well sourced. But the trouble, as many of us have learnt, is that anonymoussource stories can be denied. So for my researches into the same issue I decided to adopt a simpler expedient — actually watching BBC news programmes and reading the website over a 24-hour period last month.

The first programme I saw, the flagship 10 o’clock bulletin on 17 October, had, incredibly, as its lead story something that would have mildly shamed Pathé News — a gung-ho piece from the crew-room of RAF Coningsby about how our brave boys in light blue were ceaselessly on alert, ready and waiting to shoot down hostile aircraft. The RAF, though certainly brave, has in fact been performing this role for the last 60 years. While it might have been a topical feature just after 11 September, it simply could not be described in any sense whatever as news, let alone as the most important news in Britain that day. (The BBC said, ‘We gained access that no one else had. It is a subject that is clearly in the public interest.’) The next day’s bulletin continued the punishment, with a glowing report on how the Eurofighter, the most expensive, over-budget and disputed military project in decades, was really a jolly good thing. Everyone interviewed was an RAF officer saying how wonderful it was.

Then there was the BBC website report announcing that the privatised railways ‘are turning into a quiet success story’, something which would certainly have come as news to any rail traveller, were it true. It turned out to be a claim, adopted as fact by the reporter, from a body called the Railway Forum, wrongly described as ‘a group which repre sents a range of interests on the railway’. In fact, the Railway Forum represents only the privatised rail companies, plus Network Rail; the other ‘interests on the railway’, the passengers and the taxpayers, have no voice in it, or in the piece.

Then there was the six o’clock news the next evening, and a report on child poverty which somehow failed to mention that that day, the then Work and Pensions Secretary, David Blunkett, admitted that the government had failed to meet several of its key child poverty objectives. The report contained no political content of any description.

None of these examples shows, as is so often claimed, that the BBC is ‘biased’ towards New Labour; the problem is wider than that. What they do show is how often the Corporation’s journalism is prepared to take authority at its word, without checking.

In an extraordinary interview with the Guardian in September, the director of news, Helen Boaden, actually seemed proud of the fact that BBC News 24 got the biggest story of the year — the London bombings — wrong. For hours on the morning of July 7, long after everybody else, News 24 stuck with the initial line from London Underground that there had merely been a ‘power surge’ on the network. ‘There was a moment where that was what the story was,’ she said. ‘We continued to go with that until we had verifiable evidence [of terrorism].’ And what was the ‘verifiable evidence’ for the power surges, exactly? What this suggests is that the BBC is happier to report untrue information from official sources than to report true information from wholly reliable wire services and its own equally reliable correspondents. The Tube was still open for part of that morning; News 24’s errors could actually have risked lives, by telling viewers that it was safe to travel on.

There is, of course, ambitious and challenging journalism at the BBC — the consistently outstanding radio documentary show, File on 4; the occasional Panorama, although its record is distinctly patchy; sometimes Newsnight. But there is simply not enough of it. I asked the BBC for a list of its scoops over the last year, and was given a tally of about 20 stories, not all of which were really scoops. But the striking thing was how very few of those stories were broken by the most mainstream news programmes, such as the BBC1 bulletins and Today.

Mr Grade is right to say that impartiality, objectivity and accuracy should be at the heart of what the BBC does, and must be policed sharply, even for the likes of John Humphrys. But what he fails to understand is that it is the BBC’s viewers and listeners, not the government, or backbench toadies, or pro-Blair newspapers, who are at the centre of the impartiality debate. The BBC is not accountable to ministers, but to the public. Politicians’ opinion do not matter. The only people whose opinions count are the licence-fee payers.

There is no evidence that those licence-fee payers have any concerns whatsoever that the BBC is too aggressive towards New Labour, or any of its subjects. In fact, the real threat to the BBC’s impartiality comes from the reverse direction: that it is seen by the public as too soft, too accommodating. Very little of the BBC’s journalism in the last two years has lost the government any sleep.

It may be argued that ignoring the views of politicians is all very well in theory, but in practice they are the people with their hands loosely adjacent to the BBC’s throat. Actually, what the fall-out from the Hutton report shows us is that no politician can act against a BBC that is supported by the public, much as I am sure they would love to.

The only way the BBC can be undermined by politicians is if it loses public trust; and the best way to lose it is to jump when authority shouts.