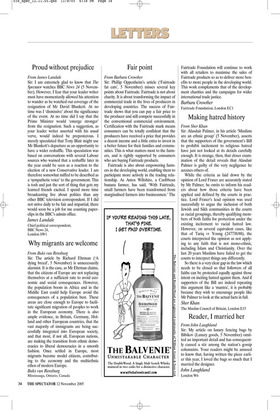 Sir: I am extremely glad to know that The Spectator watches BBC News 24 (5 November). However, I fear that your leader writer must have momentarily allowed his attention to wander as he watched our coverage of the resignation of Mr David Blunkett. At no time was I ‘dismissive’ about the significance of the event. At no time did I say that the Prime Minister would ‘emerge stronger’ from the resignation. Such a suggestion, as your leader writer asserted with his usual verve, would indeed be preposterous. I merely speculated that Tony Blair might use Mr Blunkett’s departure as an opportunity to have a wider reshuffle. This speculation was based on conversations with several Labour sources who warned that a reshuffle later in the year could be seen as a reaction to the election of a new Conservative leader. I am therefore somewhat miffed to be described as a ‘sympathetic voice’ to the government. This is tosh and just the sort of thing that gets my learned friends excited. I spend more time broadcasting live about politics than any other BBC television correspondent. If I did not strive daily to be fair and impartial, there would soon be a job for me counting paperclips in the BBC’s admin office.