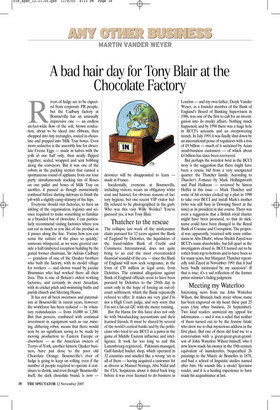 A bad hair day for Tony Blair at the Chocolate Factory

Rivers of fudge are to be expected from corporate PR people, but the Cadbury factory at Bourneville has an unusually impressive one — an endless six-feet-wide flow of the soft, brown confection, about to be sliced into ribbons, then chopped into tiny rectangles, coated in chocolate and popped into Milk Tray boxes. Even more seductive is the assembly line for chocolate Creme Eggs — made in halves with the yolk in one half only, then neatly flipped together, sealed, wrapped and sent bobbing along the conveyors. But it was one of the robots in the packing section that earned a spontaneous round of applause from our tour party: simultaneously stacking tins of Roses on one pallet and boxes of Milk Tray on another, it paused as though momentarily confused before darting sideways to finish the job with a slightly camp shimmy of the hips.

Everyone should visit factories, to have an inkling of the organisation, logistics and science required to make something so familiar as a branded bar of chocolate. I can particularly recommend visiting factories where you can eat as much as you like of the product as it passes along the line. ‘Funny how you can sense the culture of the place so quickly,’ someone whispered, as we were greeted outside a half-timbered reception building by the genial former chairman, Sir Adrian Cadbury — grandson of one of the Quaker brothers who built the factory, with its model village for workers — and shown round by jocular Brummies who had worked there all their lives. This is one of Britain’s oldest working factories, and certainly its most Arcadian, with its cricket pitch and swimming baths and parish church and Meeting House.

It has not all been sweetness and paternalism at Bourneville in recent years, however: the workforce has been reduced — by voluntary redundancies — from 16,000 to 1,200. But that process, combined with continual investment in equipment such as our mincing, dithering robot, means that there would now be no significant saving to be made by moving production to Eastern Europe or elsewhere — as the American owners of Terrys of York, another historic Quaker business, have just done to the poor old Chocolate Orange. Bourneville’s river of fudge is going to keep on rolling, even if the number of people required to operate it continues to shrink, and even though ‘Bourneville’ itself, the dark chocolate brand, is now — devotees will be disappointed to learn made in France.

Incidentally, everyone at Bourneville, including visitors, wears an obligatory white coat and hairnet, for obvious reasons of factory hygiene, but one recent VIP visitor huffily refused to be photographed in the garb. Who was this vain Willy Wonka? You’ve guessed: yes, it was Tony Blair.

Thatcher to the rescue

The collapse last week of the misfeasance claim pursued for 12 years against the Bank of England by Deloittes, the liquidators of the fraud-ridden Bank of Credit and Commerce International, does not quite bring to an end the most overextended financial scandal of the era — since the Bank of England will now seek vengeance, in the form of £70 million in legal costs, from Deloittes. The criminal allegations against Bank of England officials seem to have been pursued by Deloittes to the 256th day in court only in the hope of forcing an out-ofcourt settlement, which the Bank repeatedly refused to offer. It makes me very glad I’m not a High Court judge, and very sorry that I’m not a fat-cat QC with the meter running.

But the blame for this farce does not only lie with bloodsucking accountants and their learned friends. It must be shared by several of the world’s central banks and by the politicians who tried to use BCCI as a pawn in the game of Middle Eastern influence and intelligence. It took far too long to nail this Luxembourg-registered, Pakistani-managed, Gulf-funded bucket shop, which operated in 32 countries and smelled like a wrong ’un in all of them — having acquired a customer list as diverse as Manuel Noriega, Abu Nidal and the CIA. Suspicions about it dated back long before it was even licensed to do business in London — and my own father, Deryk Vander Weyer, as a founder member of the Bank of England’s Board of Banking Supervision in 1986, was one of the first to call for an investigation into its murky affairs. Nothing much happened, and by 1990 there was a huge hole in BCCI’s accounts and an overpowering stench. In July 1991 it was finally shut down by an international posse of regulators with a loss of £9 billion — much of it sustained by Asian small-business customers — of which about £4 billion has since been recovered.

But perhaps the weirdest twist in the BCCI story is the suggestion that there might have been a rescue bid from a very unexpected quarter: the Thatcher family. According to Thatcher’s Fortunes by Mark Hollingsworth and Paul Halloran — reviewed by Simon Heffer in this issue — Mark Thatcher and some of his cronies cooked up a plan in 1990 to take over BCCI and install Mark’s mother (who was still busy in Downing Street at the time) as its president in due course. There was even a suggestion that a British royal charter might have been procured, so that its nickname could have been changed to the Royal Bank of Cocaine and Corruption. The proposal was, apparently, ‘received with some enthusiasm in Abu Dhabi’, whose Sheikh Zayed was BCCI’s main shareholder, but fell apart as the investigators closed in. BCCI turned out to be rotten from top to bottom and to have been so for many years, but Margaret Thatcher reportedly told Zayed in November 1991 that it had been ‘badly mistreated by my successor’. If that is true, it’s a sad reflection of the former prime minister’s fading judgment.

Interesting news from rue John Waterloo Wilson, the Brussels back street whose name has been engraved on my heart these past 25 years (Any other business, 24 September). Two kind readers answered my appeal for information — and it was a relief that neither of them turned out to be the femme fatale who drew me to that mysterious address in the first place. But one of them did lead me to a conversation with a great-great-great-grandson of John Waterloo Wilson himself, who I now know made his money in the 19th century equivalent of launderettes, bequeathed 26 paintings to the Musée de Bruxelles in 1878, and had a school of linguistic studies named after him. He sounds like a model Spectator reader, and it is a healing experience to have made his acquaintance at last.