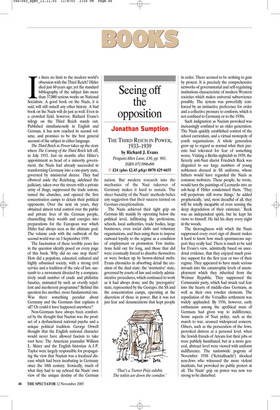 Seeing off the opposition

THE THIRD REICH IN POWER,

by Richard J. Evans Penguin/Allen Lane, £30, pp. 901, ISBN 0713996498 ✆ £24 (plus £2.45 p&p) 0870 429 6655 Is there no limit to the modern world’s obsession with the Third Reich? Hitler died just 60 years ago, yet the standard bibliography of the subject lists more than 37,000 serious works on National Socialism. A good book on the Nazis, it is said, will still outsell any other history. A bad book on the Nazis will do just as well. Even in a crowded field, however, Richard Evans’s trilogy on the Third Reich stands out. Published simultaneously in English and German, it has now reached its second volume, and promises to be the best general account of the subject in either language.

The Third Reich in Power takes up the story where The Coming of the Third Reich left off, in July 1933. Just six months after Hitler’s appointment as head of a minority government, the Nazis had already succeeded in transforming Germany into a one-party state, governed by ministerial decree. They had elbowed aside the Reichstag, sidelined the judiciary, taken over the streets with a private army of thugs, suppressed the trade unions, tamed the churches, and opened the first concentration camps to detain their political opponents. Over the next six years, they obtained almost total control over the public and private lives of the German people, channelling their wealth and energies into preparations for the European war which Hitler had always seen as the ultimate goal. The volume ends with the outbreak of the second world war on 3 September 1939.

The fascination of these terrible years lies in the question silently posed on every page of this book. Why did no one stop them? How did a populous, educated, cultured and highly urbanised society, with a strong civil service and a tradition of the rule of law, succumb to a movement directed by a comparatively small number of crude and philistine fanatics, animated by such an overtly repellent and incoherent programme? Behind this question lies another, more fundamental one. Was there something peculiar about Germany and the Germans that explains it all? Or could it have happened anywhere?

Non-Germans have always been comforted by the thought that Nazism was the product of a dysfunctional national psyche and a unique political tradition. George Orwell thought that the English national character would never have allowed fascism to take root here. The American journalist William L. Shirer and the English historian A.J.P. Taylor were largely responsible for propagating the view that Nazism was a localised disease which had been incubating in Germany since the 18th century. Ironically, much of what they had to say echoed the Nazis’ own view of the unique destiny of the German nation. But modern research into the mechanics of the Nazi takeover of Germany makes it hard to sustain. The sheer banality of the Nazis’ methods belies any suggestion that their success turned on German exceptionalism.

The Nazis achieved their tight grip on German life mainly by operating below the political level, infiltrating the professions, schools, local authorities, trade bodies, large businesses, even social clubs and voluntary organisations, and then using them to impose outward loyalty to the regime as a condition of employment or promotion. Few institutions held out for long, and those that did were eventually forced to dissolve themselves or were broken up by brown-shirted mobs. Evans chronicles in absorbing detail the creation of the dual state: the ‘normative’ state, governed by courts of law and orderly administrative procedures, which continued to work as it had always done; and the ‘prerogative’ state, represented by the Gestapo, the SS and the concentration camps, operating at the discretion of those in power. But it was not just fear and denunciations that kept people in order. There seemed to be nothing to gain by protest. It is precisely the comprehensive networks of governmental and self-regulating institutions characteristic of modern Western societies which makes universal subservience possible. The system was powerfully reinforced by an instinctive preference for order and a collective pressure to conform, which is not confined to Germany or to the 1930s.

Such indignation as Nazism provoked was increasingly confined to an older generation. The Nazis quickly established control of the school curriculum, and a virtual monopoly of youth organisations. A whole generation grew up to regard as normal what their parents had tolerated for fear of something worse. Visiting a Berlin nightclub in 1939, the fiercely anti-Nazi diarist Friedrich Reck was disgusted to see large numbers of young noblemen dressed in SS uniforms, whose fathers would have regarded the Nazis as common mobsters. These people, he wrote, would turn the paintings of Leonardo into an ash-heap if Hitler condemned them. ‘They will perpetrate still worse things,’ he added prophetically, ‘and, most dreadful of all, they will be totally incapable of even sensing the deep degradation of their existence.’ Reck was an independent spirit, but he kept his views to himself. He hid his diary every night in the woods.

The thoroughness with which the Nazis suppressed every overt sign of dissent makes it hard to know how much spontaneous support they really had. There is much to be said for Evans’s view, admittedly based on anecdotal evidence, that they enjoyed much positive support for the first year or two of their regime. They appeared to have made serious inroads into the catastrophic levels of unemployment which they inherited from the Weimar Republic. They suppressed the Communist party, which had struck real fear into the hearts of middle-class Germans, as well as their own rowdier elements. The repudiation of the Versailles settlement was widely applauded. By 1936, however, early enthusiasm among the apolitical mass of Germans had given way to indifference. Some aspects of Nazi policy, such as the march to war, aroused widespread concern. Others, such as the persecution of the Jews, provoked distress at a personal level, when the Jewish friends of Aryans lost their jobs or were publicly humiliated, but at a more general, abstract level were viewed with uniform indifference. The nationwide pogrom of November 1938 (‘Kristallnacht’) shocked non-Jews who witnessed the more violent incidents, but provoked no public protest at all. The Nazis’ grip on power was now too strong to be disturbed.