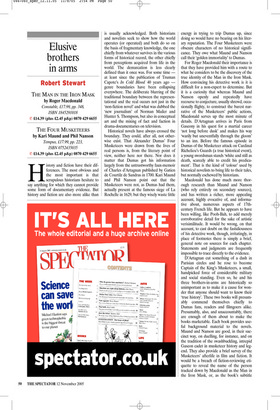 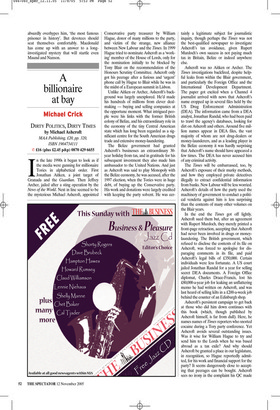 THE MAN IN THE IRON MASK by Roger Macdonald Constable, £17.99, pp. 348, ISBN 1845291018 ✆ £14.39 (plus £2.45 p&p) 0870 429 6655 THE FOUR MUSKETEERS by Kari Maund and Phil Nanson Tempus, £17.99, pp. 223, ISBN 0752435035 ✆ £14.39 (plus £2.45 p&p) 0870 429 6655 History and fiction have their differences. The most obvious and the most important is that scrupulous historians hesitate to say anything for which they cannot provide some form of documentary evidence. But history and fiction are also more alike than is usually acknowledged. Both historians and novelists seek to show how the world operates (or operated) and both do so on the basis of fragmentary knowledge, the one chiefly from whatever survives in the various forms of historical record, the other chiefly from perceptions acquired from life in the world. The demarcation is less clearly defined than it once was. For some time at least since the publication of Truman Capote’s In Cold Blood 40 years ago genre boundaries have been collapsing everywhere. The deliberate blurring of the traditional boundary between the representational and the real occurs not just in the ‘non-fiction novel’ and what was dubbed the ‘new journalism’ of Norman Mailer and Hunter S. Thompson, but also in conceptual art and the mixing of fact and faction in drama-documentaries on television.

Historical novels have always crossed the boundary. They could, after all, not otherwise exist. That Alexander Dumas’ Four Musketeers were drawn from the lives of real persons is, from the literary point of view, neither here nor there. Nor does it matter that Dumas got his information largely from the untrustworthy faux-memoir of Charles d’Artagnan published by Gatien de Courtilz de Sandras in 1700. Kari Maund and Phil Nanson point out that the Musketeers were not, as Dumas had them, actually present at the famous siege of La Rochelle in 1629, but they wisely waste little energy in trying to trip Dumas up, since doing so would have no bearing on his literary reputation. The Four Musketeers were obscure characters of no historical significance. They owe what Maund and Nanson call their ‘golden immortality’ to Dumas.

For Roger Macdonald their importance is that they have provided him with a route to what he considers to be the discovery of the true identity of the Man in the Iron Mask. How convincing his detective work is it is difficult for a non-expert to determine. But it is a curiosity that whereas Maund and Nanson openly and repeatedly have recourse to conjecture, usually shrewd, occasionally flighty, to construct the barest narrative of the Musketeers’ public actions, Macdonald serves up the most minute of details. D’Artagnan arrives in Paris from Gascony in his quest for a martial career ‘not long before dusk’ and makes his way ‘warily but uneventfully through the gloom’ to an inn. Before the famous episode in Dumas of the Musketeer attack on Cardinal Richelieu’s Guards (a true historical event), a young swordsman stands ‘white and still as death, scarcely able to credit his predicament’. That is the kind of ‘colour’ used by historical novelists to bring life to their tales, but normally eschewed by historians.

Macdonald has done much more thorough research than Maund and Nanson (who rely entirely on secondary sources), and has written a richer, more appealing account, highly evocative of, and informative about, numerous aspects of 17thcentury French life. But he appears to have been willing, like Pooh-Bah, to add merely corroborative detail for the sake of artistic verisimilitude. It would be wrong, on that account, to cast doubt on the fastidiousness of his detective work, though, irritatingly, in place of footnotes there is simply a brief, general note on sources for each chapter. Statements and judgments are frequently impossible to trace directly to the evidence.

D’Artagnan cut something of a dash in Parisian circles and he rose to become Captain of the King’s Musketeers, a small, handpicked force of considerable military and social standing. Even so, he and his three brothers-in-arms are historically so unimportant as to make it a cause for wonder that anyone should want to know their ‘true history’. These two books will presumably commend themselves chiefly to Dumas fans, readers and filmgoers alike. Presumably, also, and unaccountably, there are enough of them about to make the books marketable. Each book provides useful background material to the novels. Maund and Nanson are good, in their succinct way, on duelling, for instance, and on the tradition of the swashbuckling, intrepid Gascon cadet in musketeer history and legend. They also provide a brief survey of the Musketeers’ afterlife in film and fiction. It would be a breach of fiction-reviewing etiquette to reveal the name of the person tracked down by Macdonald as the Man in the Iron Mask, or, as the book’s subtitle absurdly overhypes him, ‘the most famous prisoner in history’. But devotees should seat themselves comfortably. Macdonald has come up with an answer to a longinvestigated mystery that will startle even Maund and Nanson.