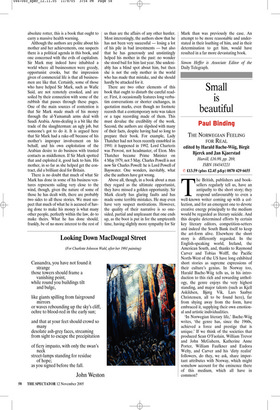 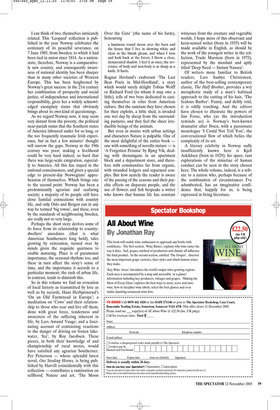 THE NORWEGIAN FEELING FOR REAL edited by Harald Bache-Wiig, Birgit Bjerck and Jan Kjaerstad Harvill, £16.99, pp. 269, ISBN 184343221 ✆ £13.59 (plus £2.45 p&p) 0870 429 6655 The British, publishers and booksellers regularly tell us, have an antipathy to the short story; they respond unfavourably to even a well-known writer coming up with a collection, and for an emergent one to devote creative energy principally to the medium would be regarded as literary suicide. And this despite determined efforts by certain key literary editors, competition-setters and indeed the South Bank itself to keep the art-form alive. Elsewhere the short story is differently regarded. In the English-speaking world, Ireland, the American South, and, thanks to Raymond Carver and Tobias Wolff, the Pacific North-West of the US have long exhibited short stories as supreme expressions of their culture’s genius. In Norway too, Harald Bache-Wiig tells us, in his introduction to this rich and rewarding anthology, the genre enjoys the very highest standing, and major talents (such as Kjell Askildsen, Bjørg Vik, Lars Saabye Christensen, all to be found here), far from shying away from the form, have embraced it, supplying their own emotional and artistic individualities.

‘In Norwegian literary life,’ Bache-Wiig writes, ‘the genre has, since the 1960s, achieved a force and prestige that is unique.’ If we think of the societies that produced Sean O’Faolain, William Trevor and John McGahern, Katherine Anne Porter, William Faulkner and Eudora Welty, and Carver and his ‘dirty realist’ followers, do they, we ask, share important attributes with Norway, which might somehow account for the eminence there of this medium, which all have in common? I can think of two, themselves intricately related. This ‘Leopard’ collection is published in the year Norway celebrates the centenary of its peaceful severance, on 7 June 1905, from Sweden, to which it had been tied in union since 1814. As a nationstate, therefore, Norway is a comparatively new country, and consequently awareness of national identity has been sharper than in many other societies of Western Europe. This has been heightened by Norway’s great success: in the 21st century her combination of prosperity and social justice, of independence and international responsibility, gives her a widely acknowledged exemplary status that obviously brings about its own kind of questionings.

As we regard Norway now, it may seem very distant from the poverty, the political near-pariah status that the Southern states of America laboured under for so long, or the too frequently traumatic Irish experience, but in fact a few minutes’ thought will narrow the gaps. Norway in the 19th century was poor; making a livelihood could be very hard indeed, so hard that there was large-scale emigration, especially to America. All this has stayed in the national consciousness, and given a special edge to present-day Norwegians’ apprehension of themselves. Which brings one to the second point: Norway has been a predominantly agrarian and seafaring society; a majority of its people still have close familial connections with country life, and only Oslo and Bergen can in any way be termed ‘big towns’, and these, even by the standards of neighbouring Sweden, are really not so very large.

Perhaps the short story derives some of its force from its relationship to countrydwellers’ anecdotes (that is what American Southerners long held), tales growing by reiteration, turned over by minds given the requisite quietness to enable maturing. Place is of paramount importance, the seasonal rhythms too, and these in turn affect the story’s sense of time, and the importance it accords to a particular moment; the rush of urban life, in contrast, tends to diminish this.

So in this volume we find an evocation of local history as transmitted by lore as well as by records, Hans Herbjørnsrud’s ‘On an Old Farmstead in Europe’; a meditation on ‘Cows’ and their relationship to those who rear and live off them, done with great force, tenderness and awareness of the suffering inherent in life, by Lars Amund Vaage; and a fascinating account of contrasting reactions to the danger of driving on frozen lakewater, ‘Ice’, by Roy Jacobsen. These pieces, in both their knowledge of and championship of rural mores, would have satisfied any agrarian Southerner. Per Petterson — whose splendid latest novel, Out Stealing Horses, is being published by Harvill coincidentally with this collection — contributes a rumination on selfhood, Nature and art, ‘The Moon Over the Gate’ (the name of his farm), honouring

a luminous round moon over the barn and the house that I live in showing white and clear in the bluish gleam, and when I turn and look back at the forest, I throw a clear, demarcated shadow. I feel it at once; the severance of body and non-body is as sharp as a knife. It hurts.

Ragnar Hovland’s exuberant ‘The Last Beat Poets in Mid-Hordland’, a story which would surely delight Tobias Wolff or Richard Ford (to whom it may owe a little), tells of two boys dedicated to casting themselves in roles from American culture. But the sanctum they have chosen for their exploits, a little shed, is invaded one wet day by sheep from the surrounding pastures, and they feel the sheer irreducible beings of the animals.

But even in stories with urban settings and characters Nature is palpable. One of the most delightful of the entire book one with something of novella stature — is ‘A Forgotten Petunia’ by Bjørg Vik, dealing with shenanigans in an apartment block and a department store, and therefore with communities far from organic, with stranded lodgers and separated couples. But how acutely the reader is aware of the passing of the seasons and their psychic effects on disparate people, and the use of flowers and fish bespeaks a writer who knows that human life has constant witnesses from the creature and vegetable worlds. I hope more of this observant and keen-sensed writer (born in 1935) will be made available in English, as should be the work of the youngest writer in the collection, Trude Marstein (born in 1973), represented by the mordant and aptly titled ‘Deep Need — Instant Nausea’.

Of writers more familiar to British readers, Lars Saabye Christensen, author of the best-selling contemporary classic, The Half Brother, provides a wry metaphoric study of a man’s habitual approach to the cutting of his hair, ‘The Jealous Barber’. Funny, and deftly told, it is oddly touching. And the editors have chosen to illustrate the powers of Jan Fosse, who (as the introduction reminds us) is Norway’s best-known dramatist after Ibsen, with a passionate monologue ‘I Could Not Tell You’, the conversational flow of which belies the complexity of its art.

A literary celebrity in Norway sadly insufficiently known here is Kjell Askildsen (born in 1929); his spare, taut explorations of the minutiae of human conduct can be seen in the story chosen here. The whole volume, indeed, is a tribute to a nation who, perhaps because of the combination of circumstances I’ve adumbrated, has an imaginative confidence that, happily for us, is being expressed in living literature.