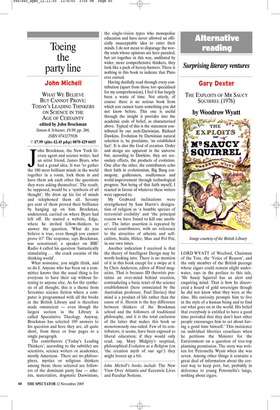 WHAT WE BELIEVE BUT CANNOT PROVE: TODAY’S LEADING THINKERS ON SCIENCE IN THE AGE OF CERTAINTY edited by John Brockman Simon & Schuster, £9.99, pp. 266, ISBN 0743275926 ✆ £7.99 (plus £2.45 p&p) 0870 429 6655 John Brockman, the New York literary agent and science writer, had an artist friend, James Byars, who had a grand idea. It was ‘to gather the 100 most brilliant minds in the world together in a room, lock them in and have them ask each other the questions they were asking themselves’. The result, he supposed, would be a ‘synthesis of all thought’. He drew up his list of minds and telephoned them all. Seventy per cent of them proved their brilliance by hanging up on him. Brockman, undeterred, carried on where Byars had left off. He started a website, Edge, where he invited fellow-thinkers to answer the question, ‘What do you believe is true, even though you cannot prove it?’ The response, says Brockman, was sensational; a speaker on BBC Radio 4 called his question ‘fantastically stimulating ... the crack cocaine of the thinking world’.

What nonsense, you might think, and so do I. Anyone who has been on a committee knows that the usual thing is for everyone to have their say without listening to anyone else. As for the synthesis of all thought, this is a theme from Seventies science fiction where a computer is programmed with all the books in the British Library and is therefore made omniscient — even though the largest section in the Library is called Speculative Theology. Anyway, Brockman has selected 109 answers to his question and here they are, all quite short, from three or four pages to a single paragraph.

The contributors (‘Today’s Leading Thinkers’, according to the subtitle) are scientists, science writers or academics, mostly American. There are no philosophers, mystics or religious thinkers among them; those selected are followers of the dominant party line — atheists, materialists, dogmatic Darwinians, the single-vision types who monopolise education and have never allowed an officially unacceptable idea to enter their minds. I do not mean to disparage the worthy souls whose opinions are here paraded, but set together in this way, undiluted by wider, more comprehensive thinkers, they look like a pack of heresy-hunters. There is nothing in this book to indicate that Plato ever existed.

Having dutifully read through every contribution (apart from those too specialised for my comprehension), I feel it has largely been a waste of time. Not utterly, of course: there is no serious book from which you cannot learn something you did not know before. This one is useful through the insight it provides into the academic code of belief, as characterised above. Typical of this is the statement contributed by our arch-Darwinian, Richard Dawkins. Evolution by Darwinian natural selection is, he proclaims, ‘an established fact’. It is also the God of creation. Order and design are apparent in the universe but, according to Dawkins, they are secondary effects, the products of evolution. One after the other, the contributors echo their faith in evolutionism, Big Bang cosmogony, godlessness, soullessness and world-improvement through technological progress. Not being of that faith myself, I reacted in favour of whatever these writers were opposed to.

My Godward inclinations were strengthened by Sam Harris’s denigration of religion as ‘a humble species of terrestrial credulity’ and ‘the principal reason we have found to kill one another’. The latter assertion is repeated by several contributors, with no reference to the atrocities of atheists and selfcultists, Stalin, Hitler, Mao and Pol Pot, in our own times.

Another indication I received is that the theory of Intelligent Design may be worth looking into. There is no mention of it in this book except for a swipe at it by Chris Anderson, editor of Wired magazine. That is because ID theorists postulate an over-mind behind creation, contradicting a basic tenet of the science establishment (here enunciated by the Australian professor, Paul Davies) that mind is a product of life rather than the cause of it. Herein is the key difference between thinkers of the Brockman school and the followers of traditional philosophy, and it is the total exclusion of the latter that makes this book so monotonously one-sided. Few of its contributors, it seems, have been exposed to liberal education; if they would only read, say, Mary Midgley’s sceptical, philosophical Evolution as a Religion (on ‘the creation myth of our age’) they might loosen up a bit.