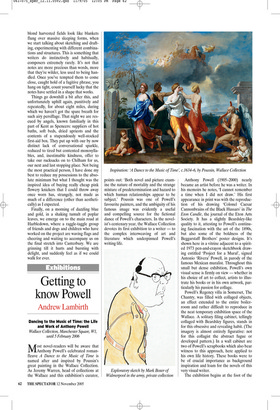 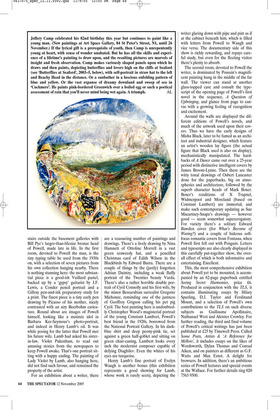 Getting to know Powell

Dancing to the Music of Time: the Life and Work of Anthony Powell Wallace Collection, Manchester Square, W1, until 5 February 2006 novel-readers will be aware that ost Anthony Powell’s celebrated romanfleuve A Dance to the Music of Time is named after and inspired by Poussin’s great painting in the Wallace Collection. As Jeremy Warren, head of collections at the Wallace and this exhibition’s curator, points out: ‘Both novel and picture examine the nature of mortality and the strange mixture of predetermination and hazard to which human relationships appear to be subject.’ Poussin was one of Powell’s favourite painters, and the ambiguity of his famous image was evidently a useful and compelling source for the fictional dance of Powell’s characters. In the novelist’s centenary year, the Wallace Collection devotes its first exhibition to a writer — to the complex interweaving of art and literature which underpinned Powell’s writing life. Anthony Powell (1905–2000) nearly became an artist before he was a writer. In his memoirs he notes, ‘I cannot remember a time when I did not draw.’ His first appearance in print was with the reproduction of his drawing ‘Colonel Caesar Cannonbrains of the Black Hussars’ in The Eton Candle, the journal of the Eton Arts Society. It has a slightly Beardsley-like quality to it, attesting to Powell’s continuing fascination with the art of the 1890s, but also some of the boldness of the Beggarstaff Brothers’ poster designs. It’s shown here in a vitrine adjacent to a spirited 1973 pen-and-crayon sketchbook drawing entitled ‘Project for a Mural’, signed Antonio ‘Rivera’ Powell, in parody of the famous Mexican muralist. Throughout this small but dense exhibition, Powell’s own visual sense is firmly on view — whether in his choice of art to collect, artists to illustrate his books or in his own artwork, particularly his passion for collage.

Powell’s Regency villa in Somerset, The Chantry, was filled with collaged objects, an effect extended to the entire boilerroom and rather difficult to reproduce in the neat temporary exhibition space of the Wallace. A solitary filing cabinet, tellingly collaged with Beardsley figures, stands in for this obsessive and revealing habit. (The imagery is almost entirely figurative: not for this collagist the abstract fugue or developed pattern.) In a wall cabinet are two of Powell’s scrapbooks which also bear witness to this approach, here applied to his own life history. These books were to be of crucial importance as background inspiration and loam for the novels of this very visual writer.

The exhibition begins at the foot of the stairs outside the basement galleries with Bill Pye’s larger-than-lifesize bronze head of Powell, made late in life. In the first room, devoted to Powell the man, is the tiny typing table he used from the 1930s on, with a selection of seven pictures from his own collection hanging nearby. There is nothing stunning here: the most substantial piece is a good-ish Vuillard pastel, backed up by a ‘gypsy’ guitarist by J.F. Lewis, a Conder pencil portrait and a Gillray pen-and-ink preparatory study for a print. The finest piece is a tiny early pen drawing by Picasso of his mother, nicely contrasted with an airy Beerbohm caricature. Round about are images of Powell himself, looking like a matinée idol in Barbara Ker-Seymour’s photo-portrait, and indeed in Henry Lamb’s oil. It was while posing for the latter that Powell met his future wife. Lamb had asked his sisterin-law, Violet Pakenham, to read out amusing stories from the newspapers to keep Powell awake. That’s one portrait sitting with a happy ending. The painting of Lady Violet by Lamb, also hanging here, did not find such favour, and remained the property of the artist.

For an exhibition about a writer, there are a reassuring number of paintings and drawings. There’s a lively drawing by Nina Hamnett of Ottoline Morrell in a vast green seaweedy hat, and a pencilled Christmas card of Edith Wilson in the Blackbirds by Edward Burra. There are a couple of things by the (justly) forgotten Adrian Daintry, including a weak fluffy portrait of the Twenties beauty Varda. There’s also a rather horrible double portrait of Cyril Connolly and his first wife, by the minor Bessarabian surrealist Gregoire Michonze, reminding one of the justness of Geoffrey Grigson calling his pet pig Cyril. The best painting here is undoubtedly Christopher Wood’s magisterial portrait of the young Constant Lambert, Powell’s best friend in the 1920s, borrowed from the National Portrait Gallery. In his darkblue shirt and deep peony-pink tie, set against a green half-goblet and sitting on green chair-caning, Lambert looks every inch the modernist composer capable of defying Diaghilev. Even the whites of his eyes are turquoise.

Henry Lamb’s fine portrait of Evelyn Waugh is another bonus (this exhibition represents a good showing for Lamb, whose work is rarely seen), depicting the writer glaring down with pipe and pint as if at the cabinet beneath him, which is filled with letters from Powell to Waugh and vice versa. The documentary side of this show is richly rewarding, and repays careful study, but even for the fleeting visitor there’s plenty to absorb.

The second room, devoted to Powell the writer, is dominated by Poussin’s magnificent painting hung in the middle of the far wall. The viewer can stand at another glass-topped case and consult the typescript of the opening page of Powell’s first novel in the sequence, A Question of Upbringing, and glance from page to canvas with a growing feeling of recognition and excitement.

Around the walls are displayed the different editions of Powell’s novels, and much of the artwork used upon their covers. Thus we have the early designs of Misha Black, later to be famed as an architect and industrial designer, which feature an artist’s wooden lay figure (the actual figure that Black used is also on display), mechanistically manipulated. The hardbacks of A Dance came out over a 25-year period with distinctive intelligent covers by James Broom-Lynne. Then there are the witty tonal drawings of Osbert Lancaster done for the paperbacks, big on atmospherics and architecture, followed by the superb character heads of Mark Boxer. Boxer’s renditions of X Trapnel, Widmerpool and Moreland (based on Constant Lambert) are immortal, and make such contemporary updating as Sue Macartney-Snape’s drawings — however good — seem somewhat supererogatory. For variety there’s a solitary Edward Bawden cover (for What’s Become of Waring?) and a couple of hideous softfocus romantic covers from Fontana, when Powell first fell out with Penguin. Letters and typescripts are also clearly displayed in this carefully put-together show, the overall effect of which is both informative and entertaining. Excellent.

This, the most comprehensive exhibition about Powell yet to be mounted, is accompanied by an 82-page paperback entitled Seeing Secret Harmonies, price £6. Produced in conjunction with the TLS, it contains illuminating essays by Hilary Spurling, D.J. Taylor and Ferdinand Mount, and a selection of Powell’s own contributions to the TLS on such diverse subjects as Guillaume Apollinaire, Nathanael West and Aleister Crowley. For further reading, the third and final volume of Powell’s critical writings has just been published at £25 by Timewell Press. Called Some Poets, Artists & ‘A Reference for Mellors’, it includes essays on the likes of Wordsworth, Dylan Thomas and Conrad Aiken, and on painters as different as G.F. Watts and Max Ernst. A delight for browsers. In addition, there’s an ambitious series of Powell lectures and special events at the Wallace. For further details ring 020 7563 9500.