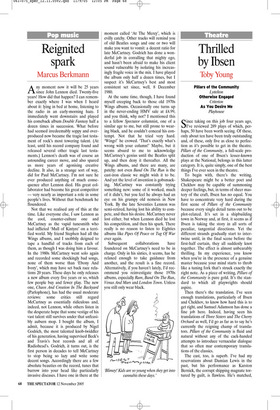 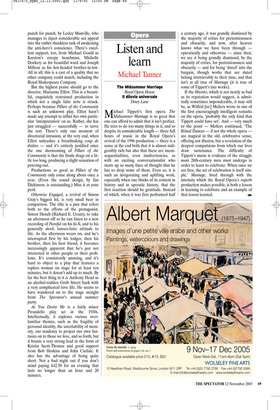 As You Desire Me

Since taking on this job four years ago, I’ve reviewed 289 plays of which, perhaps, 50 have been worth seeing. Of these, only about ten have been truly outstanding and, of these, only five as close to perfection as it’s possible to get in the theatre. Pillars of the Community, a full-scale production of one of Ibsen’s lesser-known plays at the National, belongs in this latter category. It is, quite simply, one of the best things I’ve ever seen in the theatre.

To begin with, there’s the writing. Shakespeare might be a better poet and Chekhov may be capable of summoning deeper feelings, but, in terms of sheer mastery of the craft, Ibsen has no equal. You have to concentrate very hard during the first scene of Pillars of the Community because every single detail turns out to be plot-related. It’s set in a shipbuilding town in Norway and, at first, it seems as if Ibsen is taking the story in all sorts of peculiar, tangential directions. Yet the different strands gradually start to intertwine until, in the final scene before the first-half curtain, they all suddenly knot together. The effect is almost unbearably thrilling. In my experience, you know when you’re in the presence of a genuine master because your mind starts to throb like a tuning fork that’s struck exactly the right note. As a piece of writing, Pillars of the Community is pure gold. It’s the standard to which all playwrights should aspire.

Then there’s the translation. I’ve seen enough translations, particularly of Ibsen and Chekhov, to know how hard this is to get right, and Samuel Adamson has done a fine job here. Indeed, having seen his translations of Three Sisters and The Cherry Orchard as well, I’d go as far as to say he’s currently the reigning champ of translators. Pillars of the Community is fluid and natural without any of the cack-handed attempts to introduce vernacular dialogue that so often mar contemporary translations of the classics.

The cast, too, is superb. I’ve had my reservations about Damian Lewis in the past, but his performance as Karston Bernick, the corrupt shipping magnate tortured by guilt, is flawless. He’s matched, punch for punch, by Lesley Manville, who manages to inject considerable sex appeal into the rather thankless task of awakening the anti-hero’s conscience. There’s excellent support, too, from Michael Gould as Karston’s creepy henchman, Michelle Dockery as his beautiful ward and Joseph Millson as his hot-headed brother-in-law. All in all, this is a cast of a quality that no other company could match, including the Royal Shakespeare Company.

But the highest praise should go to the director, Marianne Elliot. This is a beautiful, exquisitely restrained production in which not a single false note is struck. Perhaps because Pillars of the Community is such an unknown play, Elliot hasn’t made any attempt to inflict her own particular ‘interpretation’ on us. Rather, she has just struggled — successfully — to serve the text. There’s only one moment of directorial intrusion, at the very end, when Elliot unleashes a breathtaking coup de théâtre — and it’s entirely justified since the one shortcoming of Pillars of the Community is that the finale drags on a little too long, producing a slight sensation of petering-out.

Productions as good as Pillars of the Community only come along about once a year. (Even the sound design, by Ian Dickinson, is outstanding.) Miss it at your peril.

Otherwise Engaged, a revival of Simon Gray’s biggest hit, is very small beer in comparison. The title is a pun that refers both to the efforts of the protagonist, Simon Hench (Richard E. Grant), to take an afternoon off so he can listen to a new recording of Parsifal on his hi-fi, and to his generally aloof, laissez-faire attitude to life. As the afternoon wears on, and he’s interrupted first by his lodger, then his brother, then his best friend, it becomes increasingly apparent that he’s just not interested in other people or their problems. It’s consistently amusing, and it’s hard to object to a play that features a topless woman on stage for at least ten minutes, but it doesn’t add up to much. By far the best thing in it is Anthony Head as an alcohol-sodden Grub Street hack with a very complicated love life. He seems to have wandered on to the stage straight from The Spectator’s annual summer party.

As You Desire Me is a fairly minor Pirandello play set in the 1930s. Intellectually, it explores various overfamiliar themes, such as the fragility of personal identity, the unreliability of memory, our tendency to project our own fantasies on to those we love, and so forth, but it boasts a very strong lead in the form of Kristin Scott-Thomas and good support from Bob Hoskins and John Carlisle. It also has the advantage of being quite short. Not a bad night out if you don’t mind paying £42.50 for an evening that lasts no longer than an hour and 20 minutes.