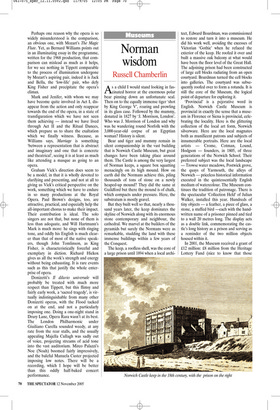 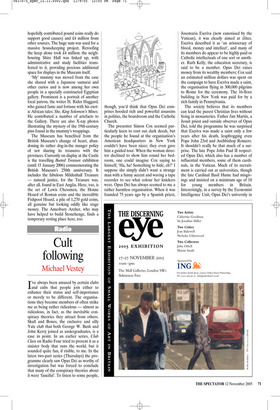 As a child I would stand looking in fascinated horror at the enormous polar bear pinning down an unfortunate seal. Then on to the equally immense tiger ‘shot by King George V’, roaring and prowling in its glass case. Followed by the mummy, donated in 1827 by ‘J. Morrison, London’. Who was J. Morrison of London and why was he wandering round Norfolk with the 3,000-year-old corpse of an Egyptian woman? History is silent.

Bear and tiger and mummy remain in silent companionship in the vast building that is Norwich Castle Museum, but great changes have been taking place around them. The Castle is among the very largest of Norman keeps, a square box squatting menacingly on its high mound. How on earth did the Normans achieve this, piling thousands of tons of stone on a newly heaped-up mound? They did the same at Guildford but there the mound is of chalk, which compacts under pressure. Here, the substratum is mostly gravel.

But they built well so that, nearly a thousand years later, the keep dominates the skyline of Norwich along with its enormous stone contemporary and neighbour, the cathedral. We marvel at the builders of the pyramids but surely the Normans were as remarkable, studding the land with these immense buildings within a few years of the Conquest.

The keep, a roofless shell, was the core of a large prison until 1894 when a local archi tect, Edward Boardman, was commissioned to restore and turn it into a museum. He did his work well, avoiding the excesses of Victorian ‘Gothic’ when he refaced the exterior of the keep. He roofed it over and built a massive oak balcony at what would have been the floor level of the Great Hall. The adjoining prison had been constructed of large cell blocks radiating from an open courtyard. Boardman turned the cell blocks into galleries. The courtyard was subsequently roofed over to form a rotunda. It is still the core of the Museum, the logical point of departure for exploring it.

‘Provincial’ is a pejorative word in English. Norwich Castle Museum is provincial in exactly the sense that a museum in Florence or Siena is provincial, celebrating the locality. Here is the glittering collection of the local art form, Norwich silverware. Here are the local magnates both as munificent patrons and subjects of innumerable portraits. Here are the local artists — Crome, Cotman, Lound, Hodgson — founders, in 1805, of three generations of the Norwich School. Their preferred subject was the local landscape — Trowse water meadows, Postwick grove, the quays of Yarmouth, the alleys of Norwich — priceless historical information executed in the quintessentially English medium of watercolour. The Museum continues the tradition of patronage. There is the spectacular ‘Collection Held’ of Julian Walker, installed this year. Hundreds of tiny objects — a feather, a piece of glass, a stone, a stuffed bird —each with the handwritten name of a prisoner pinned and tied to a wall 20 metres long. The display acts as a double link, commemorating the castle’s long history as a prison and serving as a reminder of the two million objects housed within it.

In 2001, the Museum received a grant of £12 million: £8 million from the Heritage Lottery Fund (nice to know that those hopefully contributed pound coins really do support good causes) and £4 million from other sources. The huge sum was used for a massive housekeeping project. Reroofing the keep alone took £4 million; the neighbouring Shire Hall was linked up, with administrative and study facilities transferred to it, providing precious additional space for displays in the Museum itself.

‘My’ mummy was moved from the case she shared with a Japanese samurai and other curios and is now among her own people in a specially constructed Egyptian gallery. Prominent is a portrait of another local patron, the writer H. Rider Haggard, who gained fame and fortune with his exotic African tales: She, King Solomon’s Mines. He contributed a number of artefacts to the Gallery. There are also X-ray photos illustrating the mystery of the 19th-century pins found in the mummy’s wrappings.

The Museum has benefited from the British Museum’s change of heart, abandoning its rather dog-in-the manger policy of not sharing its treasures with the provinces. Currently on display at the Castle is the travelling Buried Treasure exhibition (until 15 January 2006) commemorating the British Museum’s 250th anniversary. It includes the fabulous Mildenhall Treasure — natural justice, for the Treasure was, after all, found in East Anglia. Here, too, is the set of Lewis Chessmen, the Hoxne Hoard of Roman coins and the incredible Fishpool Hoard, a pile of 1,270 gold coins, all genuine but looking oddly like stage money. The Amesbury Archer, who may have helped to build Stonehenge, finds a temporary resting place here, too.