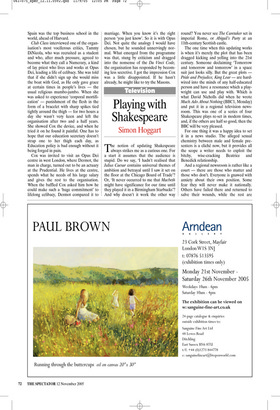 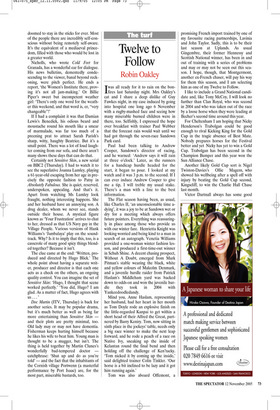 The notion of updating Shakespeare always strikes me as a curious one. For a start it assumes that the audience is stupid. Do we say, ‘I hadn’t realised that Julius Caesar contains universal themes of ambition and betrayal until I saw it set on the floor at the Chicago Board of Trade’? Or, ‘It never occurred to me that Macbeth might have significance for our time until they played it in a Birmingham Starbucks’? And why doesn’t it work the other way round? You never see The Caretaker set in imperial Rome, or Abigail’s Party at an 11th-century Scottish castle.

The one time when this updating works is when it’s merely the plot that has been dragged kicking and yelling into the 21st century. Someone declaiming ‘Tomorrow and tomorrow and tomorrow’ in a space suit just looks silly. But the great plots Pride and Prejudice, King Lear — are hardwired into the minds of any half-educated person and have a resonance which a playwright can use and play with. Which is what David Nicholls did when he wrote Much Ado About Nothing (BBC1, Monday) and put it in a regional television newsroom. This was one of a series of four Shakespeare plays re-set in modern times, and, if the others are half so good, then the BBC will be very pleased.

For one thing it was a happy idea to set it in a news studio. The alleged sexual chemistry between male and female presenters is a cliché now, but it provides all the scope a writer needs to exploit the bitchy, wise-cracking Beatrice and Benedick relationship.

And a regional newsroom is rather like a court — there are those who matter and those who don’t. Everyone is gnawed with anxiety about their own position. Some fear they will never make it nationally. Others have failed there and returned to salve their wounds, while the rest are doomed to stay in the sticks for ever. Most of the people there are incredibly self-conscious without being remotely self-aware. It’s the equivalent of a mediaeval princedom, filled with those who would be lost in a greater world.

Nicholls, who wrote Cold Feet for Granada, has a wonderful ear for dialogue. His news bulletins, dementedly condescending to the viewer, banal beyond reckoning, were pitch perfect. He ends a report, ‘the Women’s Institute there, proving it’s not all jam-making.’ Or Billie Piper’s sweet but incompetent weather girl: ‘There’s only one word for the weather this weekend, and that word is, er, “very changeable”!’ If I had a complaint it was that Damian Lewis’s Benedick, his odious beard and moustache round his mouth like a smear of marmalade, was far too much of a preening prat to attract Sarah Parish’s sharp, witty, haughty Beatrice. But it’s a small point. There was a lot of loud laughter coming from our sofa, and there aren’t many shows these days that can do that.

Certainly not Sensitive Skin, a new serial on BBC2 (Thursday). I had to watch it to see the superlative Joanna Lumley, playing a 61-year-old escaping from her age in precisely the opposite fashion to Patsy in Absolutely Fabulous. She is quiet, reserved, underspoken, appealing. And that’s it. Apart from watching Ms Lumley look fraught, nothing interesting happens. She and her husband have an annoying son. A drug dealer, whom we never see, stands outside their house. A mystical figure known as ‘Your Frustration’ arrives to chat to her, dressed as that US Navy guy in the Village People. Various versions of Hank Williams’s ‘Jambalaya’ play on the soundtrack. Why? Is it to imply that this, too, is a casserole of many good spicy things blended together? Because it isn’t.

The clue came at the end: ‘Written, produced and directed by Hugo Blick.’ The whole point about having a separate writer, producer and director is that each one acts as a check on the others, an ongoing quality control. You can imagine the set of Sensitive Skin: ‘Hugo, I thought that scene worked perfectly.’ ‘You did, Hugo? I am glad. As a matter of fact, Hugo agrees with us ... ’ Doc Martin (ITV, Thursday) is back for another series. It may be popular drama, but it’s much better as well as being far more entertaining than Sensitive Skin and their plots are pretty minimal, too. Old lady may or may not have dementia. Fisherman keeps hurting himself because he likes his wife to beat him. Young man is thought to be a mugger, but isn’t. The thing is held together by Martin Clunes’s wonderfully bad-tempered doctor catchphrase: ‘Shut up and do as you’re told’ — and the fact that the inhabitants of the Cornish village Portwenn (a masterful performance by Port Isaac) are, for the most part, miserable bastards, too.