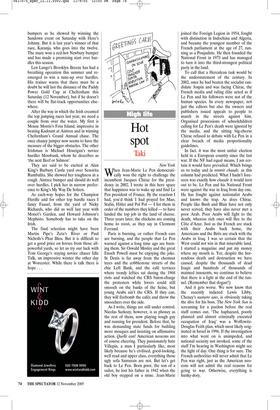 When Jean-Marie Le Pen democratically won the right to challenge the incumbent Jacques Chirac for the presidency in 2002, I wrote in this here space that happiness was to wake up and find Le Pen president of France. By the reaction I had, you’d think I had prayed for Mao, Stalin, Hitler and Pol Pot — I list them in order of the numbers they killed — to have landed the top job in the land of cheese. Three years later, the chickens are coming home to roost, as they say in Clermont Ferrand.

Paris is burning, or rather French cars are burning, and the people that Le Pen warned against a long time ago are burning them. Sir Oswald Mosley and the great Enoch Powell must be enjoying the joke. St Denis is far away from the chestnut trees and the cobblestone streets of the chic Left Bank, and the café terraces where trendy lefties sat during the 1968 riots and watched the CRS baton-charge the protesters while lovers could still smooch on the banks of the Seine, but young Arabs ain’t the CRS. If they can, they will firebomb the cafés and throw the smoochers over the side.

As I write, things are still under control. Nicolas Sarkozy, however, is as phoney as the rest of them, now playing tough guy and running for president. Before that, he was demanding state funds for building more mosques and insisting on affirmative action. Quelle con! American neocons are of course cheering. They passionately hate Villepin, a man I particularly like, most likely because he’s civilised, good-looking, well read and upper class, everything those ugly sofa Samurais are not. But let’s get back to Le Pen. Born poor, the son of a sailor, he lost his father in 1942 when the old boy stepped on a mine. Jean-Marie joined the Foreign Legion in 1954, fought with distinction in Indochina and Algeria, and became the youngest member of the French parliament at the age of 27, running as a Poujadiste. He then founded the National Front in 1973 and has managed to turn it into the third-strongest political party in the land.

To call that a Herculean task would be the understatement of the century. In 2002, once he had beaten the socialist candidate Jospin and was facing Chirac, the French media and ruling élite acted as if Le Pen and his followers were not of the human species. In every newspaper, not just the editors but also the owners and publishers issued appeals to people to march in the streets against him. Organised processions of schoolchildren calling for Le Pen’s death were ignored by the media, and the sitting big-cheese Chirac refused to debate with Le Pen in a clear breach of media proportionality guidelines.

In fact, it was the most unfair election held in a European country since the last war. If the NF had equal means, I am certain it would have prevailed. Which brings us to today and la rentrée chaude, as this column had predicted. What I hadn’t foreseen was exactly how chaude it would turn out to be. Le Pen and his National Front were against the war in Iraq from day one. He has fought against nationalist Arabs and knows the trap. As does Chirac. People like Bush and Blair have not only never served, they have also never met a poor Arab. Poor Arabs will fight to the death, whereas rich ones will flee to the Côte d’Azur. Just as the French are stuck with their Arabs back home, the Americans and the Brits are stuck with the Arabs in Iraq. I was so certain that the West could not win in that miserable land, I started a magazine and put my money where my mouth is. Yet, despite the horrendous death and destruction we have caused, despite the thousands of dead Iraqis and hundreds of thousands of maimed innocents, we continue to believe that there is a light at the end of the tunnel. (Remember that slogan?) And it gets worse. We now know that the recently indicted Lewis Libby, Cheney’s numero uno, is obviously taking the dive for his boss. The New York Sun is screaming for a pardon before the real stuff comes out. ‘The haphazard, poorly planned and almost criminally executed occupation of Iraq’ was a WolfowitzDouglas Feith plan, which most likely originated in Israel in 1996. If the investigation into what went on is unimpeded, and national security not invoked, some of the stuff I’m hearing in Washington might see the light of day. One thing is for sure. The French authorities will never admit that Le Pen was right, just as the American neocons will not admit the real reasons for going to war. Otherwise, everything is hunky-dory.