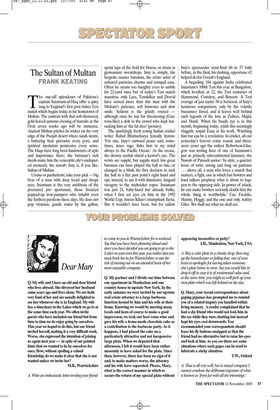 The Sultan of Multan

The one-off splendours of Pakistan’s captain Inzamam-ul-Haq offer a spicy tang to England’s first post-Ashes Test match which begins today in his hometown of Multan. The contrast with that soft-showered, gold-leaved autumn evening of hurrahs at the Oval seven weeks ago will be immense. Ancient Multan pitches its wicket on the very edge of the Punjab desert where sands storm, a battering heat pervades every pore, and spiritual mysticism permeates every sense. The Haqs have long been landowners of style and importance there; the batsman’s rich deeds make him the venerable city’s undisputed monarch, the nawab; Inzy is, if you like, Sultan of Multan.

Ursine or pachyderm, take your pick — big bear of a man with dozy tread and sleepy eyes, Inzamam is the very antithesis of the pressured pro sportsman, those frenzied pepped-up iron-pumpers who inhabit even the furthest pavilions these days. He does not pop vitamins, guzzle water by the gallon, sprint laps of the field for fitness, or strain in gymnasium sweatshops. Inzy is, simply, the bespoke master batsman, the aristo artist of cultured patrician charms and tranquil ease. Often he seems too haughty even to amble his 22-yard runs; but of today’s Test match maestros, only Lara, Tendulkar and Dravid have scored more than this man with the Multani’s patience, soft humours and slow smile. Seldom is the grizzly roused although once he was for threatening (Cantona-like) a dolt in the crowd who kept barracking him as ‘the fat aloo’ (potato).

The sparklingly fresh young Indian cricket writer Rahul Bhattacharya lyrically hymns: ‘For size, Inzy’s outward peace and, sometimes, inner rage, links him in my mind always to the Pacific Ocean.’ At the crease, the drowsy eyelids shield a kestrel’s eye. The wrists are supple, but supple steel; few great batsmen can have played the ball so late, or changed in a blink the first decision to rack the ball in a fizz past point’s right hand and opt, instead, to axe it with dismissive, languid savagery to the midwicket ropes. Inzamam was just 21, baby-faced but already bulky, when I first set eyes on him at the 1992 World Cup, Imran Khan’s triumphant fiesta. But it wouldn’t have been, but for callow Inzy’s spectacular semi-final 60 in 37 balls before, in the final, his dashing, opportune 42 helped do for Gooch’s England.

A beguiling 184 against India celebrated Inzamam’s 100th Test this year at Bangalore, which levelled, at 22, the Test centuries of Hammond, Cowdrey, and Boycott. A Test average of just under 50 is bettered, of Inzy’s luminous compatriots, only by the volatile buccaneer Javed, and it leaves well behind such legends of the lore as Zaheer, Majid, and Hanif. When his beady eye is in this month, beginning today, relish this seemingly sluggish, torpid Esau at his work. Watching him bat can be a revelation. In cricket, all our yesterday’s forever come round, and threescore years ago the onliest Robertson-Glasgow was writing here of one of Inzamam’s just as princely subcontinental kinsmen, the Nawab of Pataudi senior: ‘In style, a quietist; loose of wrist, strong and long on patience ... above all, a man who loves a match that matters, a fight, one in which fast bowlers and loud talkers prophesy what is about to happen to the opposing side. In power of attack, he can make bowlers seriously doubt that the whole thing is worthwhile.’ Cue Freddie, Harmy, Hoggy, and the one and only Ashley Giles. We shall see what we shall see.