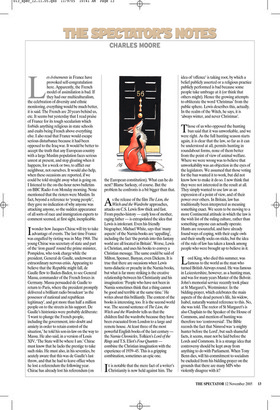 French model of assimilation is bad. If they had our multiculturalism, the celebration of diversity and ethnic monitoring, everything would be much better, it is said. The French are 20 years behind us, etc. It seems but yesterday that I read praise of France for its tough secularism which forbids anything religious in state schools and exalts being French above everything else. I also read that France would escape serious disturbance because it had been opposed to the Iraq war. It would be better to accept the truth that any European country with a large Muslim population faces serious unrest at present, and stop gloating when it happens, for a week or two, to afflict our neighbour, not ourselves. It would also help, when these occasions are reported, if we could be told straight away what is going on. I listened to the on-the-hour news bulletins on BBC Radio 4 on Monday morning. None mentioned that the rioters were Muslim. In fact, beyond a reference to ‘young people’, they gave no indication of why anyone was attacking anyone, so the sudden appearance of all sorts of race and immigration experts to comment seemed, at first sight, inexplicable.

Iwonder how Jacques Chirac will try to take advantage of events. The last time France was engulfed by rioting was in May 1968. The young Chirac was secretary of state and part of the ‘iron guard’ round the prime minister, Pompidou, who took charge while the president, General de Gaulle, underwent an extraordinary nervous crisis. Appearing to believe that the Republic might fall, de Gaulle flew to Baden-Baden, to see General Massu, commander of the French forces in Germany. Massu persuaded de Gaulle to return to Paris, where the president promptly delivered a brilliant radio broadcast ‘as the possessor of national and republican legitimacy’, and got more than half a million people on to the streets in his support. De Gaulle’s histrionics were probably deliberate: ‘I want to plunge the French people, including the government, into doubt and anxiety in order to retain control of the situation,’ he told his son-in-law on the way to Massu. He also said, in a version of Louis XIV, ‘The State will be where I am.’ Chirac must know that he lacks the prestige to take such risks. He must also, in his seventies, be acutely aware that this was de Gaulle’s last throw, and that he had to leave office when he lost a referendum the following year. Chirac has already lost his referendum (on the European constitution). What can he do next? Blame Sarkozy, of course. But the problem he confronts is a bit bigger than that.

As the release of the film The Lion, the Witch and the Wardrobe approaches, attacks on C.S. Lewis flow thick and fast. From psycho-history — early loss of mother, raging father — is extrapolated the idea that Lewis is intolerant. Even his friendly biographer, Michael White, says that ‘many aspects’ of the Narnia books are ‘appalling’, including the fact ‘the portals into this fantasy world are all located in Britain’. Worse, Lewis is Christian, and uses his books to convey a Christian message. The same could be said of Milton, Spenser, Bunyan, even Dickens. It is true that there are occasions when Lewis turns didactic or preachy in the Narnia books, but what is far more striking is the creative relationship between his Christianity and his imagination: ‘People who have not been in Narnia sometimes think that a thing cannot be good and terrible at the same time.’ He writes about this brilliantly. The context of the books is interesting, too. It is the second world war. The second sentence of The Lion, the Witch and the Wardrobe tells us that the children find the wardrobe because they have been evacuated from London to a large and remote house. At least three of the most powerful English books of the last century the Narnia Chronicles, Tolkien’s Lord of the Rings and T.S. Eliot’s Four Quartets combine the Christian imagination with the experience of 1939–45. This is a gripping combination, sometimes an epic one.

It is notable that the mere fact of a writer’s Christianity is now held against him. The idea of ‘offence’ is taking root, by which a belief publicly asserted or a religious practice publicly performed is bad because some people take umbrage at it (or think that others might). Hence the growing attempts to obliterate the word ‘Christmas’ from the public sphere. Lewis describes this, actually. In the realm of the Witch, he says, it is ‘always winter, and never Christmas’.

Those of us who opposed the hunting ban said that it was unworkable, and we were right. As the full hunting season starts again, it is clear that the law, so far as it can be understood at all, permits hunting in roundabout forms, none of them better from the point of view of animal welfare. Where we were wrong was to believe that unworkability was an objection in the eyes of the legislators. We assumed that those voting for the ban wanted it to work, but did not know how to make it do so. I now think that they were not interested in the result at all. They simply wanted to use law as an expression of a point of view, and of their power over others. In Britain, law has traditionally been interpreted as meaning something exact. We seem to be moving to a more Continental attitude in which the law is the wish list of the ruling culture, rather than something anyone can actually operate. Hunts are resourceful, and have already found ways of coping, with their eagle owls and their smelly socks on sticks, but the idea of the rule of law has taken a knock among people who were brought up to believe in it.

Lord King, who died this summer, was famous to the world as the man who turned British Airways round. He was famous in Leicestershire, however, as a hunting man, and was for many years Master of the Belvoir. John’s memorial service recently took place at St Margaret’s, Westminster. In the bidding-prayer, which celebrates the main aspects of the dead person’s life, his widow, Isabel, naturally wanted reference to this. No, she was told. The rector of St Margaret’s is also Chaplain to the Speaker of the House of Commons, and mention of hunting was therefore too ‘controversial’. The Bible records the fact that Nimrod was ‘a mighty hunter before the Lord’, but such shameful facts, it seems, must not be laid before the Lords and Commons. It is a strange idea that controversy should be kept away from anything to do with Parliament. When Tony Benn dies, will his commitment to socialism be excluded from his bidding-prayer on the grounds that there are many MPs who violently disagree with it?