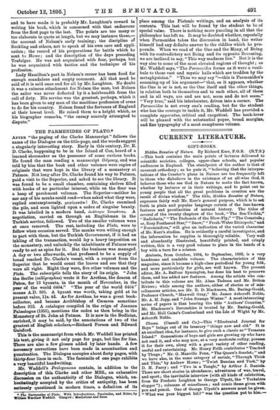 THE PARMENIDES OF PLATO.*

AFTER "the paging of the Clarke Manuscript" follows the name of the Dialogue on the title-page, and the words suggest a singularly interesting story. Early in this century, Dr. E. D. Clarke, happening to be in the Island of Cos, heard of a learned shoemaker as the possessor of some curious books. He found the man reading a manuscript Odyssey, and was told by him that the book and other volumes were copies of originals that were kept in the library of a monastery at Patmos. Not long after Dr. Clarke found his way to Patmos, paid a visit to the Superior, and asked to see the library. It was found to be a small chamber, containing shelves filled with books of no particular interest, while on the floor was a heap of parchment volumes. The Superior—neither he nor any of his monks could read—when asked what they were, replied contemptuously, xelpypa(pa! Dr. Clarke examined the pile, and soon lighted upon a codex of singular beauty. It was labelled in a modern hand, Licaoyot Y.outpti.rov;. A negotiation, carried on through an Englishman in the Turkish service, followed. Two of the smaller volumes were at once removed. The rest, including the Plato, were to follow when occasion served. The monks were willing enough to part with them, but the Turkish Government, if it bad an inkling of the transaction, would lay a heavy imposition on the monastery, and unluckily the inhabitants of Patmos were ready to act as spies for it. Bat the business was managed. A day or two afterwards, what professed to be a supply of bread reached Dr. Clarke's vessel, with a request from the Superior that he would count the loaves and see that they were all right. Right they were, five other volumes and the Plato. The subscriptio tells the story of its origin. "John the Scribe (calligraphus) wrote it for Arethas, the deacon of Patraa, for 13 byzants, in the month of November, in the year of the world 6404." " The year of the world 6404'' means A.D. 895. A byzant was worth, taking gold at its present value, Ils. 4d. As for Arethas, he was a great book- collector, and became Archbishop of Caesarea sometime before 913. A catalogue compiled in the reign of Joannes Palaaologus (1355), mentions the codex as then being in the Monastery of St. John at Patmos. It is now in the Bodleian, enriched, it may be said, by the annotations of two of the greatest of English scholars,—Richard Porson and Edward Gaisford.

This is the manuscript from which Mr. Waddell has printed his text, giving it not only page for page, but line for line. There are also a few glosses added by later hands. A few necessary corrections have been made in accentuation and punctuation. The Dialogue occupies about forty pages, with thirty-four lines in each. The facsimile of one page exhibits a very beautiful handwriting.

Mr. Waddell's Prolegomena contain, in addition to the description of this Clarke and other MSS., an exhaustive discussion on the authenticity of the Dialogue, which, un- hesitatingly accepted by the critics of antiquity, has been seriously questioned in modern times, a definition of its

• The Parma:Ass of Plato. With Introdnctions, Facsimiles, and Notes, by William Wardlaw Waddell. Glasgow : MacLehose and Sons.

place among the Platonic writings, and an analysis of its contents. This last will be found by the student to be of special value. There is nothing more puzzling in all that the philosopher has left us. It may be doubted whether, especially when Parmenides takes the discussion in hand, the writer himself had any definite answer to the riddles which he pro- pounds. When we read of the One and the Many, of Being with its contradictory not Being and its opposite Becoming, we are inclined to say, " This way madness lies." But it is the way also to some of the most elevated regions of thought ; as Mr. Waddell says, " The Parmenides forms as it were a vesti- bule to those vast and mystic halls which are trodden by the metaphysician." " Thus we may say "—this is Parmenides's summing-up of his argument—" that, as it appears, whether the One is or is not, so the One itself and the other things, in relation both to themselves and to each other, all of them and in all ways, are and are not, seem and do not seem." " Very true," said his interlocutor, driven into a corner. The Parmenides is not every one's reading, but for the student. who has the courage to tackle it, Mr. Waddell has provided a complete apparatus, critical and exegetical The book-lover will be pleased with the substantial paper, broad margins, and fine typography of a most sumptuous volume.