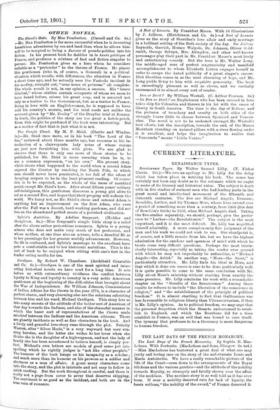 The Giant's Gate. By Max Pemberton. (Cassell and Co. 6s.) —Mr. Max Pemberton is far more successful when he is inventing breathless adventures by sea and land than when he allows him- self to be tempted to bring a flavour of pseudo-politics into his fiction. In his present book he dabbles in is haute politique of France, and produces a mixture of fact and fiction singular to peruse. Mr. Pemberton gives us a hero whom he considers suitable as a "pretender" to the throne of France. He places this gentleman (who is, of course, a General) in a political situation which recalls, with differences, the situation in France a short time ago, and he actually uses the Fashoda incident in his medley, straight out, "avec noms et prenoms" all complete. The whole result is not, in our opinion, a success. His " brave General," whose stables contain occupants of whom we seem to have heard before, misses his great coup, and is arrested not only as a traitor to the Government, but as a traitor to France, Being in love with an Englishwoman, he is supposed to have sold his country's secrete, and his trial reads not unlike the account given by "Mr. Dooley" of the Dreyfus trial at Rennes. In truth, the politics of the story are too great a hotch-potch. Even this might be pardoned if the book were interesting. But as a matter of fact that is just what it is not.