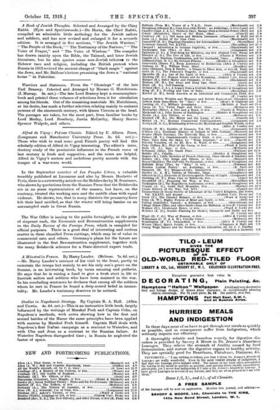 net.) —Mr. Harry Lauder's account of his visit to the front, partly to entertain the troops but mainly to see his only son's grave on the Somme, is an interesting book, by turns amusing and pathetic. He says that .he is raising a fund to give a fresh start in life to Scottish sailors and soldiers who have been maimed in the war. In his concluding sentences he declares that among all the soldiers whom he met in France he found a deep-seated belief in immor- tality. Mr. Lauder's testimony deserves to he noticed.