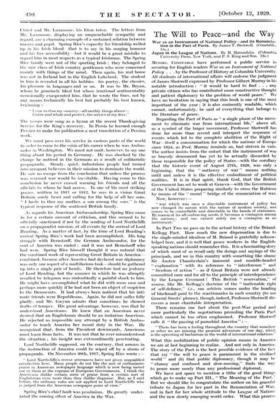 The Letters and Friendships of Sir Cecil Spring Rice. Edited by Stephen Gwynn. 2 Vols. Price for the 2 vols. 42s. THE title which Mr. Stephen Gwynn has chosen for these two volumes is beautifully descriptive of the contents. " Letters and Friendships "—friendship was a large part of the life of Sir Cecil Spring Rice and to all his friends he wrote fully about his doings and his thoughts. These letters cover a considerable stretch of diplomatic history. His talent for friendship was quite exceptional ; he made friends easily and on them he bestowed unceasing affection. His letters must have been cherished or not so many of them would have been available for these volumes, and Mr. Gwynn tells us that the letters to Mr. Roosevelt, of which he prints a selection, would alone fill a volume. One of the letters from RooseVelt on the Russo- Japanese peace which he. engineered is of extraordinary interest and importance, but we cannot do more than refer to it.

Those who take a delight in watchingcharadter unfold itself unconsciously in informal letters to friends will find a perfect treasury in this memoir. It is one of the most delightful collections of letters we have read for a long time, but we must not commend it to our readerS without saying at once that the editing by Mr. Stephen Gwynn is brilliant. Every letter seems to have been put in its right place ; there is no check in an orderly sequence of events t and Mr. Gwynn has played the part of expositor admirably. He never says too little or too much ; he has combined clearness with extreme lucidity. Finally, when he offers his own comment it strikes us as invariably just, because his judgment can always be verified from the letters themselves. Spring Rice stands out as a remarkably accomplished and attractive man, and this result is attained without any suppressions or exaggerations.

Spring Rice had a wonderful preparation for the Ambassa- dorship in America—the culmination of his life—in the earlier years which he spent there in a humbler capacity. He then learned to understand Americans. He formed deep friendships among a gifted intellectual set, and he came to the conclusion, which grew intenser with the years, that the one shining hope for the world was the unity of the English- speaking races in their outlook. He knew that an alliance would be a hindrance not a help, but he saw no limit to the advantages of an understanding co-operation. Among his American friends Roosevelt was the earliest and the most influential. His correspondence with Senator and Mrs. Lodge was spread over many years. Mrs. Cameron, whose papers have been deposited in an American library, was another friend, and so was that cryptic and sometimes snarling but withal generous scholar, Henry Adams.

Among Spring Rice's principal English friends were Mr. Ronald Munro Ferguson, now Lord Novar, Sir Valentine Chirol and Mr. Luxmoore. his Eton tutor. The letters from Mr. Luxmoore, displaying an unquenchable sympathy and regard, are a charming example of a sustained relation between master and pupil. Spring Rice's capacity for friendship welled up in his Irish blood—that is to say in his surging humour and his free accessibility—but it would be a great mistake to regard him in most respects as a typical Irishman. The Spring Rice family were not of the sporting Irish ; they belonged to the rare class of Irish country gentlemen who were concerned mainly with things of the mind. Then again, his real home was not in Ireland but in the English Lakeland. The student in him is revealed in all his hobbies—his poetry, the classics; his pleasure in languages and so on. It was to Mr. Bryan, whom be genuinely liked but whose irrational sentimentality occasionally exasperated him, that he wrote the lines, not by any means technically his best but probably his best known, beginning :—

`• I cow to thee my country—all earthly things above:— Entire and whole and perfect, the service of my love."

The verses were sung as a hymn at the recent Thanksgiving Service for the King's recovery. In Persia he learned enough Persian to make for publication a neat translation of a Persian work.

We must pass over his service in various parts of the world in order to come to the crisis of his career when he was Ambas- sador in Washington. We must not omit, however, to say one thing about his period in Germany. He was shocked by the change he noticed in the Germans as a result of militaristic propaganda. Steady, quiet, industrious people had turned into arrogant believers in their mission to dominate the world. I lc say no escape from the conclusion that Unless the process was reversed war would be inevitable. Having come to this conclusion he never ceased warning his friends and all the officials to whom he had access. In one of his most striking poems. written in 1911 or 1912, he sees in a vision Great Britain sorely beset and calling for the help of all her sons. " I haste to thee my mother, a son among thy sons " is the typical response of the scattered British family.

As regards his American Ambassadorship, Spring Rice came in for a certain amount of criticism, and this seemed to be officially sanctioned if not by the sending of Lord Northcliffe on a propagandist mission, at all events by the arrival of Lord Reading. As a matter of fact, by the time of Lord Reading's arrival Spring Rice's work had been accomplished. His long struggle with Bernstorff, the German Ambassador, for the soul of America was ended ; and it was not Bernstorff who had won. Spring Rice himself thought it was natural that the combined work of representing Great Britain in America— combined, because after America had declared war diplomacy was only one aspect of a multifarious task—should be gathered up into a single pair of hands. He therefore had no jealousy of Lord Reading, but the manner in which he was abruptly recalled by telegram was undoubtedly a painful shock to him. Ile might have accomplished what he did with more ease and perhaps more quickly if he had not been an object of suspicion to the Democrats. It had always been noticed that his

inti- mate friends were Republicans. Again, he did not suffer folly gladly, and Mr. Gwynn admits that sometimes he showed faults of temper. His great advantage, however, was that he understood Americans. He knew that an American never desired that an Englishman should be an imitation American. He rejected as impossible any attempt by a British Ambas- sador to-teach America her moral duty in the War. He recognized that, from the President downwards, Americans must learn from facts. It was not that he ever misunderstood the situation ; his insight was extraordinarily penetrating. Lord Northcliffe supposed, on the contrary, that arrears in the instruction of America- could be wiped off by a storm of propaganda. On November 30th, 1917, Spring Rice wrote :— Lord Northcliffe's recent utterances have not given unqualified satisfaction here. Many people do not like the sort of enthusiastic praise in American newspaper language which_now being meted - out to them at the expense of European -Governments. I think the Americans dislike certain sorts of praise from a certain sort of - Englishman even more than they dislike dispraise. But, as I said before, the ordinary rules are not applied to Lord Northcliffe who' is judged from the American newspaper point of view." - Spring Rice's chief fault was pessimism. He greatly under- rated the coming effort of America in the War.