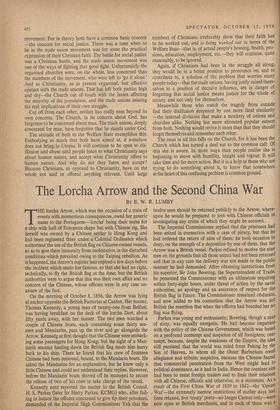 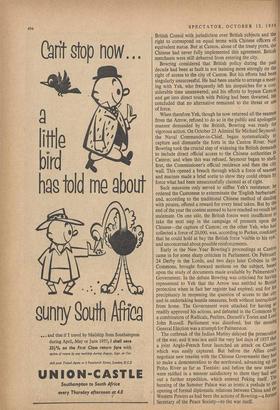 The Lorcha Arrow and the Second China War

BY E. W. R. LUMBY THE lorcha Arrow, which was the occasion of a train of events with momentous consequences, owed her generic name to the Portuguese—`lorcha' being their name for a ship with hull of European shape but with Chinese rig. She herself was owned by a Chinese settler in Hong Kong and had been registered there under a Colonial Ordinance which authorised the use of the British flag on Chinese-owned vessels, so as to give them immunity from molestation in the disturbed conditions which prevailed owing to the Taiping rebellion. As it happened, the Arrow's register had expired a few days before the incident which made her famous, so that she had no right, technically, to fly the British flag at the time; but the British authorities were to argue that this was their own affair and no concern of the Chinese, whose officers were in any case un- aware of the fact.

On the morning of October 8, 1856, the Arrow was lying at anchor opposite the British Factories at Canton. Her master, Thomas Kennedy, a young man of twenty-one from Belfast, was having breakfast on the deck of the lorcha Dart, about fifty yards away, with her master. The two men watched a couple of Chinese boats, each containing some thirty sea- men and Mandarins, pass up the river and go alongside the Arrow. Kennedy at first thought that the Chinese were embark- ing some passengers for Hong Kong; but the sight of a Man- darin seaman hauling down the British flag made him hurry back to his ship. There he found that his crew of fourteen Chinese had been removed, bound, to the Mandarin boats. He asked the Mandarins for an explanation, but he knew only a little Chinese and could not understand their replies. However, before the Mandarin boats shoved off he managed to secure the release of two of his crew to take charge of the vessel.

Kennedy next reported the matter to the British Consul, H. S. Parkes (later Sir Harry Parkes, KCMG) who, after fail- ing to induce the officers concerned to give up their prisoners, demanded of the Imperial High Commissioner Yeh that the twelve men should be returned publicly to the Arrow, where- upon he would be prepared to join with Chinese officials in investigating any crime of which they might be accused.

The Imperial Commissioner replied that the prisoners had been seized in connection with a case of piracy, but that he had ordered the return of nine of them; he took occasion to deny, on the strength of a deposition by one of them, that the -Arrow was a British vessel. Parkes refused to receive the nine men on the grounds that all those seized had not been returned and that in any case the delivery was not made in the public manner he had demanded. After obtaining instructions from his superior, Sir John Bowring, the Superintendent of Trade, he presented the Commissioner with an ultimatum requiring within forty-eight hours, under threat of action by the naval authorities, an apology and an assurance of respect for the British flag in future. The Commissioner remained obdurate, and now added to his contention that the Arrow was not British the assertion that when the officers had boarded her no flag was flying.

Parkes was young and enthusiastic; Bowring, though a man of sixty, was equally energetic. He had become impatient with the policy of the Chinese Government, which was based on a profound contempt and suspicion of all foreigners; coo- tempt, because, despite the weakness of the Empire, the idea still persisted that the world was ruled from Peking by the Son of Heaven, to whom all the Outer Barbarians owed allegiance and tribute; suspicion, because the Chinese feared that commercial penetration from the West might lead to political dominance, as it had in India. Hence the constant aim had been to resist foreign traders and to limit their relations with all Chinese, officials and otherwise, to a minimum. As a result of the First China War of 1839 to 1842—the `Opium War'—the extremely narrow restrictions of earlier days had been relaxed; five 'treaty' ports—no longer Canton only—were now open to British merchants, and in each of these was a British Consul with jurisdiction over British subjects and the right to correspond on equal terms with Chinese officers of equivalent status. But at Canton, alone of the treaty ports, the Chinese had never fully implemented this agreement. British merchants were still debarred from entering the city.

Bowring considered that British policy during the past decade had been at fault in not insisting more strongly on the right of access to the city of Canton. But his efforts had been singularly unsuccessful. He had been unable to arrange a meet- ing with Yeh, who frequently left his despatches for a con' siderable time unanswered; and his efforts to bypass Canton and get into direct touch with Peking had been thwarted. He concluded that no alternative remained to the threat or use of force.

When therefore Yeh, though he now returned all the seamen from the Arrow, refused to do so in the public and apologetic manner demanded by the British, Bowring was ready for vigorous action. On October 23 Admiral Sir Michael Seymour. the Naval Commander-in-Chief, began systematically to capture and dismantle the forts in the Canton River. Next Bowring took the crucial step of widening the British demands to include direct official access to the Chinese authorities in Canton; and when this was refused. Seymour began to shell. first, the Commissioner's official residence and then the city wall. This opened a breach through which a force of seamen and marines made a brief sortie to show they could obtain by force what had been unsuccessfully claimed as of right.

Such measures only served to stiffen Yeh's resistance; be, ordered the Cantonese to exterminate the 'English barbarians' and, according to the traditional Chinese method of dealing with pirates, offered a reward for every head taken. But by the end of the year the contest seemed to have reached no result but stalemate. On one side, the British forces were insufficient to take the next step in the campaign of pressure upon the Chinese—the capture of Canton; on the other Yeh, who had collected a force of 20,000, was, according to Parkes, confider; that he could hold at bay the British force 'visible to his eye. and unconcerned about possible reinforcements. Early in the New Year Bowring's proceedings at Canton came in for some sharp criticism in Parliament. On February 24 Derby in the Lords, and two days later Cobden in the, Commons, brought forward motions on the subject, based upon the study of documents made available by Palmerstoo's Government. In the debate Bowring was criticised for having represented to Yeh that the Arrow was entitled to British . „ protection when in fact her register had expired; and for his precipitancy in reopening the question of access to the city and in undertaking hostile measures, both without instructions ; from home. The Government were attacked for having ad I readily approved his actions, and defeated in the Commons bY, a combination of Radicals, Peelites, Disraeli's Tories and Lora John Russell. Parliament was dissolved, but the ensuing General Election was a triumph for Palmerston. The outbreak of the Indian Mutiny delayed the prosecution of the war, and it was not until the very last days of 1857 that a joint Anglo-French force launched an attack on Canton. which was easily captured. But before the Allies could, negotiate new treaties with the Chinese Government they had to make a demonstration to the northward, advancing up the Peiho River as far as Tientsin; and before the new treaties were ratified in a manner satisfactory to them they had sent out a further expedition, which entered Peking itself. The burning of the Summer Palace was as ironic a prelude to the opening of formal diplomatic relations between China and the Western Powers as had been the actions of Bowring—a formet Secretary of the Peace Society—to the war itself.