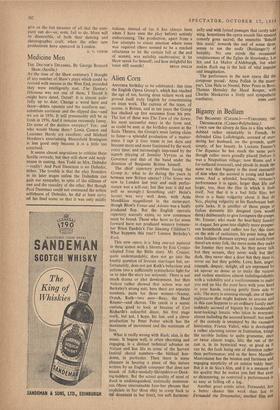 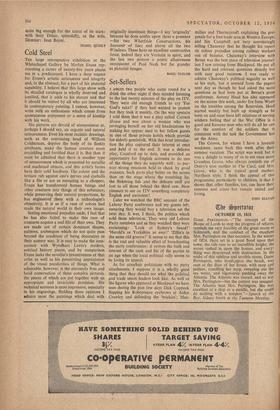 I ONCE saw the silvery tie Sica in a film where, dubbed rather unsuitably in French, he defended Gina Lollobrigida, accused of mar' dering her husband, on the grounds, quite simply, of her beauty. In Luciano Emmeis The Bigamist he has much the same part, though rather more grandly placed (before it was a Neapolitan village; now Rome and a fur-collared overcoat), and pleads in much the same way that bigamy is the most excusable of sins when the accused is young and haw some. And a splendid, heartless, virtuoso s performance it is again, larger than life and larger, too, than the film in which it finds itself. Not that it is a bad little film; but there is a basic vulgarity about it that de Sica, playing vulgarity at his flamboyant best, quite lacks. It is another of those peeps at Italian domestic life designed (you would think) deliberately to give foreigners the creeps. Mr. Emmer, who made the heat-hazy Sunday in August, has gone into slightly more prosper ous households and rather too far, this time on the side of caricature, his point being that since Italians (Romans anyway and south frog there) are noisy folk, the more noise they make the funnier they must be. So they never talk but they scream, they never walk but they dash, they never shut a door but they slam it, never eat but they gobble. Love, hate, anger, triumph, despair, delight, all are expressed by an uproar so dense as to make the various and violent emotions almost indistinguishable with a volubility and a vociferousness to make you end up like the poor hero with your head in your hands, rocking gently from side to side. The story is amusing enough, one of those nightmares that might happen to anyone and in this case happens to an ordinary family ma suddenly accused of bigamy by a (moderately sane-looking) lunatic who takes in everyong almost including the accused himself; but much of the comedy is swamped by the excessive histrionics. Franca Valeri, who is developing a rather alarming corner in frustration, brings the terrible Isolina to quite gruesome, once or twice almost tragic, life; the rest of the cast is, in its hysterical way, as good as it can be, the fault being one of direction rather than performance; and as the hero Marcello Mastroianni has the bounce and furriness and engaging simplicity of an outsize teddy best But it is de Sica's film, and it is a measure of his quality that he makes you feel that eve so shimmering, so contrived a performance Is as easy as falling off a log.

Another great comic actor, Fernandel, ha a better chance this week than last i Fernandel the Dressmaker, another film pc quite big enough for the talent of its stars: with Suzy Delair, splendidly, as the wife. Director: Jean Boyer.