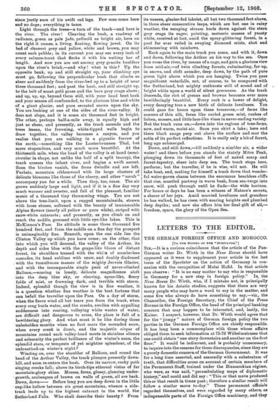 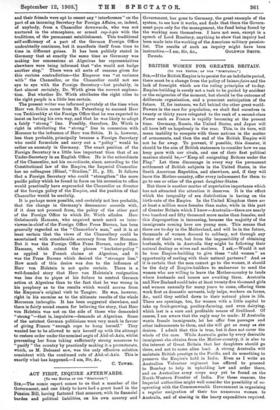 THE GERMAN FOREIGN OFFICE AND MOROCCO.

[To TIM EDITOR OP TRII "SPROTAT011."] SI11,—It is a curious coincidence that the article of the Pan- German writer Dr. Wirth in the Neue Revue should have appeared as it were to supplement your article in the last issue of the Spectator on the action of Germany in con- nexion with the recognition of /falai Hafid. In that article you observe : "It is no easy matter to say who is responsible in Germany for a new step in foreign policy." In, the Neue Revue Dr. Wirth, who, if I mistake not, is principally known for his Asiatic studies, suggests that there are very many people who may have a word to say in the matter, and some five who always do have something to say,—viz., the Chancellor, the Foreign Secretary, the Chief of the Press Bureau in the Foreign Office, the head of the principal banking concern that may happen to be interested, and, lastly, the Kaiser. I suspect, however, that Dr. Wirth would agree that for the "jumpy" nature of German foreign policy the two parties in the German Foreign Office are chiefly responsible. It has long been a commonplace with those whose affairs obliged them to seek information at 75-76 Wilhelmstrasse that one could obtain "one story downstairs and another on the first floor." It would be indiscreet, and is probably unnecessary, to inquire into the reasons for these discrepancies, since they are a purely domestic concern of the German Government. It was for a long time asserted, and assuredly with a substratum of tratli, that difficulties arose on account of certain members of the Permanent Staff, trained under the Bismarckian regime, who were, as was said, "perambulating maps of diplomatic history," and could and did say : "This or that move produced this or that result in times past ; therefore a similar result will follow a similar move to-day." These permanent officials regarded themselves, and were regarded by many others, as indispensable parts of the Foreign Office machinery, and they

and their friends were apt to resent any "interference" on the part of an incoming Secretary for Foreign Affairs, or, indeed, of anybody, from a Chancellor downwards, who was not nurtured in the atmosphere, or armed cap-a-pie with the traditions, of the permanent establishment. This traditional self-sufficiency of a part of the German Foreign Office undoubtedly continues, but it manifests itself from time to time in different guises. It has been publicly stated in Germany that at exactly the same time as Germany was making her concessions at Algeciras her representatives elsewhere were being informed that "she would not budge another step." There were all sorts of reasons given for this curious contradiction—the Emperor was "at variance with" the Chancellor, or the Chancellor could not see eye to eye with the Foreign Secretary—but probably, in - fact almost certainly, Dr. Wirth gives the correct explana- • tion. But whether Dr. Wirth attributes the right roles to the right people is a little less certain.

The present writer was informed privately at the time when Herr von Salon came from St. Petersburg to succeed Herr von Tschirschky at the Foreign Office that be was expected to insist on having his own way, and that he was likely to adopt a fairly " strong " line. Possibly, therefore, Dr. Wirth is right in attributing the " strong " line in connexion with Morocco to the influence of Herr von Schou. It is, however, less than probable, principally because a Foreign Secretary who could formulate and carry out a "policy" would be rather an anomaly in Germany. The exact position of the Foreign Secretary is a little less important than that of an Under-Secretary in an English Office. He is the subordinate of the Chancellor, not his co-ordinate, since, according to the Constitutional law of the Empire, the Imperial Chancellor has no colleagues (Hanel, " Studien," II., p. 19). It follows that a Foreign Secretary who could "strengthen" the more pacific policy which he found in force on his accession to office would practically have superseded the Chancellor as director of the foreign policy of the Empire, and the position of that Chancellor would be tvackelig.

It is perhaps more possible, and certainly not less probable, that the change in Germany's demeanour accords with, if it does not proceed from, the policy of the other part of the Foreign Office to which Dr. Wirth alludes. Herr Gebeinirath Hamann, who acquired much merit as inter- viewee-in-chief of the Foreign Office Press Bureau, has been generally regarded as the "Chancellor's man," and it is at least certain that the views of the Chancellery could be ascertained with considerable accuracy from Herr Hamann. But it was the Foreign Office Press Bureau, under Herr Hamann, which coined the phrase " huckster-policy " as applied to French claims at Algeciras, and it was the Press Bureau which desired the "stronger line." How much of this desire was due to the influence of Herr von Holstein is not quite certain. There is a well-founded story that Herr von Holstein's resignation was less due to pique at his failure to control German action at Algeciras than to the fact that he was wrong in his prophecy as to the results which would accrue from the Emperor's original visit to Tangier. He was, however, right in his surmise as to the ultimate results of the whole Moroccan imbroglio. It has been suggested elsewhere, and there is fairly sound reason for believing the story, that Herr von Holstein was not on the side of those who demanded " strong "—that is, impulsive—demands at Algeciras. Some of the astutest German politicians were very much in favour of giving France "enough rope to hang herself." They wanted her to be allowed to mix herself up with the attempt to restore order under the nominal aegis of Abd-ul-Aziz, whilst preventing her from taking sufficiently strong measures to " pacify " the country by practically making it a protectorate, which, as M. Delcasse saw, was the only effective solution consistent with the continued rule of Abd-ul-Aziz. This is exactly what has happened.—I am, Sir, &c., C. TowEn.