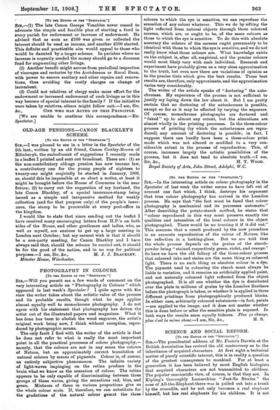 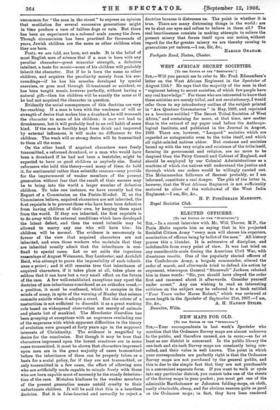 [To THE EDITOR OF THE "SPECTATOR."] SIR,—The presidential address of Mr. Francis Darwin at the British Association has revived the old controversy as to the inheritance of acquired characters. At first sight a technical matter of purely scientific interest, this is in reality a question of the greatest consequence to mankind. For at least a generation it has been believed by most English biologists that acquired characters are not transmitted to children. The popular unscientific view, of course, is that they are. In Kipling's thoroughly Lamarckian "Just-So Stories" the nose of All-the-Elephant-there-was is palled out into a trunk by the crocodile, and he not only becomes a real elephant himself, but has real elephants for his children. It is not

uncommon for "the man in the street" to express an opinion that mutilation for several successive generations might in time produce a race of tailless dogs or cats. But there has been an experiment on a colossal scale among the Jews. Though circumcision has been practised for thousands of years, Jewish children are the same as other children when they are born.

Poets, we are told, are born, not made. It is the belief of most English men of science that if a man is born with any peculiar character—great muscular strength, a defective intellect, a taste for music—some of his children will probably inherit the character. But if be is born the same as other children, and acquires the peculiarity merely from his sur- roundings—if he has his muscles developed by special exercises, or goes mad through ill-treatment or accident, or has been taught music, however perfectly, without having a natural gift—then his children will be exactly the same as if he had not acquired the character in question.

Evidently the social consequences of this doctrine are very far-reaching. If a man is born with the weakness of will or strength of desire that makes him a drunkard, he will transmit the character to some of his children : it may not lead to drunkenness, but it will probably lead to an evil habit of some kind. If the man is forcibly kept from drink and improved by- external influences, it will make 110 difference to the children. The weak will or strong desire will be transmitted to them all the same.

On the other hand, if acquired characters were freely transmitted, a reformed drunkard, or a man who would have been a drunkard if he had not been a teetotaler, might be expected to have as good children as anybody else. Social reformers who hold this theory—and many of them do bold it, for sentimental rather than scientific reasons—may provide for the improvement of weaker members of the present generation without fear that the result of their success may be to bring into the world a larger number of defective children. To take one instance, we have recently had the Report of a Commission on the Feeble-Minded. If, as the Commission believe, acquired characters are not inherited, the first requisite is to prevent those who have been born defective from having children of their own, by keeping them apart from the world. If they are inherited, the first requisite is to do away with the external conditions which have developed the latent defect, and then the cured imbecile may be allowed to marry any one who will have him : his children will be normal. The evidence is enormously in favour of the view that acquired characters are not inherited, and even those workers who maintain that they are inherited usually admit that the inheritance is con- fined to special cases. Let us set aside the ingenious reasonings of August Weismann, Ray Lankester, and Arclidall Reid, who attempt to prove the impossibility of such inherit- ance a priori; and it still remains true that inheritance of acquired characters, if it takes place at all, takes place so seldom that it can have but a very small effect on the future of the race. A few well-established exceptions may upset the doctrine of non-inheritance considered as an orthodox creed,— a position, it must be confessed, which it occupies in the minds of many, in spite of the warning of Huxley that science commits suicide when it adopts a creed. But the colonr of a nasturtium is not sufficient to discredit it as a great working rule based on widespread observation not merely of animals . and plants but of mankind. The Manchester Guardian has been grasping at exceptions with an eagerness reminding one of the eagerness with which apparent difficulties in the theory of evolution were grasped at forty years ago in the supposed interests of Christianity. The evidence is magnified by desire for the conclusion. But though it may be true that characters impressed upon the lowest creatures are in some cases transmitted, it must be shown that characters impressed upon men are in the great majority of cases transmitted before the inheritance of them can be properly taken as a basis for a social policy, for if they are not transmitted, or only transmitted in a few cases, the effect of allowing men who are artificially made capable to mingle freely with those who are born capable must of necessity be the steady deteriora- tion of the race. Mistaken kindness to the weaker members of the present generation means untold cruelty to their unfortunate children. It will be said that this is a heartless doctrine. But it is false-hearted and cowardly to reject a

doctrine because it distresses us. The point is whether it is true. There are many distressing things in the world : are we to shut our eyes and refuse to believe in them all ? The real heartlessness consists in making attempts to relieve the present misery that forces itself upon our notice; without regard for the far greater misery we are thereby causing to generations yet unborn.—I am, Sir, &c.,