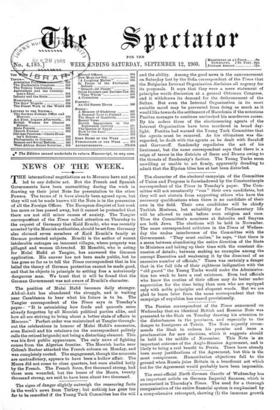 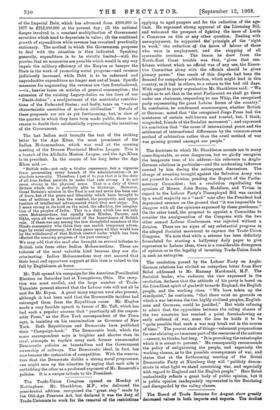 Page 1, 12 September 1908 — The semi-official North. German Gazette of Wednesday has an important
Close

The semi-official North. German Gazette of Wednesday has an important

article on German Imperial finances, which is summarised in Thursday's Times. The need for a thorough reorganisation of the entire financial system is emphasised by a comprehensive retrospect, showing (1) the immense growth

of the Imperial Debt, which has advanced from 2800,000 in 1877 to 2212,500,000 at the present day ; (2) the national danger involved in a constant multiplication of Government securities which tend to depreciate in value; (8) the continued growth of expenditure while revenue has remained practically stationary. The method in which the Government proposes to deal with the situation is then indicated. Speaking generally, expenditure is to be strictly limited—with the proviso that no economies are possible which would in any way impair the military efficiency of the Empire or hamper the State in the work of promoting social progress—and revenue judiciously increased, while Debt is to be redeemed and unproductive expenditure no longer met out of loans. Specific measures for augmenting the revenue are then foreshadowed, —viz., heavier taxes on articles of general consumption ; the extension of the existing Legacy-duties on the lines of our "Death-duties"; a readjustment of the matricular contribu- tions of the Federated States ; and lastly, taxes on "various characteristic amenities of modern civilisation." Details of these proposals are not as yet forthcoming, but, in view of the quarter in which they have been made public, there is no reason to doubt their substantially representing the intentions of the Government.