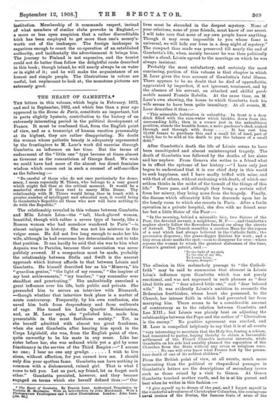 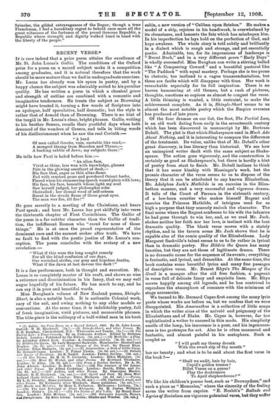 THE HEART OF GAMBETTA.* THE letters in this volume, which

appeared in the Revue de Paris, constitute an important, but in parts slightly hysteric, contribution to the history of an

extremely interesting period in the political development of France. It must be confessed that, from the English point of view, and as a transcript of human emotion presumably at its highest, they are rather disappointing. No doubt the woman whose pathetic beauty is adequately represented by the frontispiece to M. Lanes work did exercise through Gambetta an influence on her time. But the terms of endearment of the "little one" type become at times almost as tiresome as the romanticism of George Sand. We wish we could have had more of the almost too direct feminine

wisdom which comes out in such a counsel of self-sacrifice as the following :— "Be careful of those .ivho do not care particularly for demo- cracy, I mean especially M. Thiers, who belongs to a rear guard which might fail thee at the critical moment. It would be a masterful stroke if thou wert to marry. Mlle. Dosno. Thy relationship with M. Thiers would bring thee in touch with a greater number of intelligent and educated men, it would bring to Gambetta's Republic all those who now will have nothing to do with the Republic."

The relationship revealed in this volume between Gambetta and Mlle. Leonie Leon—the "tall, black-gloved woman,

beautiful, though with rather a severe type of beauty, like a Roman woman who had somehow wandered to Paris "—is almost unique in history. She was not his mistress in the vulgar sense. He did not live long enough to make her his wife, although he had overcome her determination not to take that position. It can hardly be said that she was to him what Aspasia was to Pericles, because their association was never publicly avowed. If a comparison must be made, probably the relationship between Stella and Swift is the nearest approach which history affords to that between Leonie and

Gambetta. He himself described her as his "Minerva," his "guardian genius," "the light of my reason," "the inspirer of my best achievements," "my teacher," "my counsellor ever steadfast and penetrating." She undoubtedly exercised a great influence over his life, both public and private. She persuaded him to secure an interview with Bismarck, —though whether that interview took place is a matter of acute controversy. Frequently, by his own confession, she saved him both from despondency and from outbursts of rage. She tamed his Latin Quarter Bohemianism, and, as M. Laur says, she "polished him, made him presentable in the most fastidious society." Yet, as she herself admitted with almost too great frankness, when she met Gambetta after hearing him speak in the Corps Legislatif, she was, from the English point of view, quite unworthy to be his mate in any sense. Like her sister before her, she was seduced while yet a girl by some functionary in the service of the Third Empire :—" I accuse no one ; I bear no one any grudge I wish to live alone, without affection, for you cannot love me. I should

only dim your spotless fame. Gambetta can have nothing in common with a dishonoured, ruined girl. That is what I came to tell you. Let us part, my friend, let us forget each

other." Gambetta persisted, however, and they became engaged on terms which she herself defined thus :—" Our

• The Heart of Gambetta. By Francis Laur. Authorised Translation by Violette M. Montague. With an Introduction by John Macdonald. With a Photogravure Frontispiece and 5 other Illustrations. London John Lane. 110n. eda

lives must be shrouded in the deepest mystery. None of your relations, none of your friends, must know of our secret. I will take care that none of my own people know anything. Though it may seem impossible to you whose fame is universal, we will hide our lives in a deep night of mystery." The compact thus made was preserved till nearly the end of Gambetta's life, when, mainly because he was then politically under a cloud, Leonia agreed to the marriage on which he was always insistent.

Probably the most satisfactory, and certainly the most convincing, portion of this volume is that chapter in which M. Laur gives the true account of Gambetta's fatal illness. There appears to be no doubt that he died of appendicitis, aggravated by imperfect, if not ignorant, treatment, and by the absence of his servant, an attached and skilful garde mobile named Francis Robelin. At the same time, on M. Laur's own showing, the house to which Gambetta took his

wife seems to have been quite insanitary. At all events, M. Laur describes it thus :—

" This miserable habitation is unhealthy. In front is a deep ditch filled with the rain-water which trickles down from the surrounding hills ; then in a corner just in the unhealthiest position, stands the bumble house, a mere gardener's shed, soaked

through and through with damp It has cost him 12,000 francs to purchase this and a small bit of land, part of which has to be sold at his death to pay the balance of a small debt."

After Gambetta's death the life of Leonie seems to have been unmitigated and almost uninterrupted tragedy. The death of Gambetta was followed by the deaths of her sister and her nephew. From Geneva she writes to a friend what is in effect the epitome of her history :—" I have only just begun to understand that it is our chief duty in this world to seek happiness, and I have madly trifled with mine, and with that of others, without reckoning with death, of which one seldom thinks in the midst of the tumult of the things of this life." Years pass, and although they bring a certain relief from her misery, they bring none from the tragedy. Finally, the disease which ultimately kills her descends upon her in the lonely room to which she resorts in Paris. After a futile operation in a private hospital, she dies with no friend near her but a little Sister of the Poor :—

"In the morning, behind a miserable bier, two Sisters of the Poor, the devoted servant, a neighbour, M. P—, and Gambetta's nephew slowly follow the flowerless funeral car along the streets of Auteuil. The Church mumbles a careless Mass for the repose of a soul which bad always believed in the Catholic faith ; the procession disperses ; the grave-digger finishes his work ; and a tiny cross alone marks the spot—soon to disappear for ever—where reposes the woman to whom the greatest statesman of the time, France's greatest patriot, said :—

' To the light of my soul, To the star of my life, To Leonie Von,

The allusion in this melancholy passage to "the Catholi, faith" may be said to summarise that element in Monk, Leon's influence upon Gambetta which was not purely emotional, and was not expressed in such phrases as "dear ideal little one," "dear adored little one," and "dear beloved wife." It was evidently Leonie's ambition to reconcile the

Bohemian freethinker, whose heart she possessed, to the Church, her intense faith in which bad prevented her from marrying him. There seems to be a considerable amount

of controversy as to the relation between Gambetta and Leo XIII.; but Leonie was plainly bent on adjusting the relationships between the Pope and the author of "Clericalism is the enemy." No positive agreement was reached, and

M. Laur is compelled helplessly to say that it is at all events

"very interesting to ascertain that the Holy See, fearing a schism, had consented to parley, hoping thereby to obtain a favourable settlement of the French Church's material interests, while Gambetta on his side had amiably planned the separation of the Churches from the State without any crisis or religious wars. No one will ever know what France lost by the prema- ture death of one of its noblest children."

From the British point of view, at all events, much more interesting than the political or rhapsodical passages in Gambetta's letters are the descriptions of secondary issues

such as those raised by a visit to Genoa. At Genoa Gambetta touched mother earth, and he is at his purest and

best when he writes in this fashion :—

"I give myself up to dream of the past, and I forget myself in the wonderful adventures of Christopher Columbus, the courageous naval cruises of the Dorias, the famous feats of arms of the

Spinolas, the gilded extravagances of the Doges ; though a true Frenchman, I feel a hereditary regret to behold once more all the great witnesses of the fortunes of the proud Genoese Republic, a Republic where strength and dignity walked hand in hand with the liberty of the people."