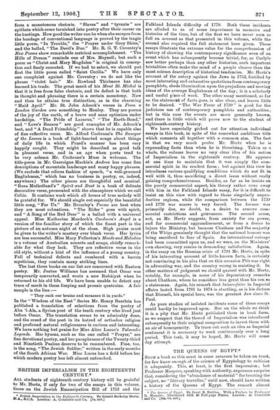 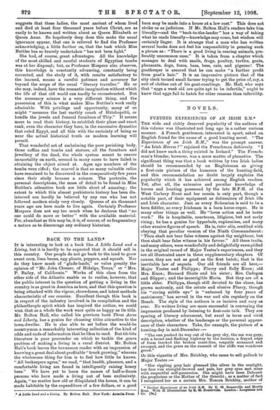 THE QUEENS OF EGYPT.*

SUCH a book as this must in some measure be taken on trust, for few know enough of the science of Egyptology to criticise it adequately. This, at least, is the first impression ; but Professor Dlaspero, speaking with authority, expresses surprise that, considering the "abundance of material" for treating the subject, no "literary traveller," until now, should have written a history of the Queens of Egypt. The remark almost • The Queens of Egypt. By Janet 11.. Bottles. With a Preface by Professor G. Pauper°. Illustrated with 20 Full-page Plates. London : A. Constable and Co. [We. 6d. net.]

suggeste that these ladies, the most ancient of whom lived and died at least four thousand years before Christ, are as easily to be known and written about as Queen Elizabeth or Queen Anne. So hopelessly deep does this make the usual ignorance appear, that one is relieved to find the Professor acknowledging, a little further on, that the task which Miss Buttles has so bravely undertaken "has not been light."

She had, of course, great advantages. All the knowledge of the most skilled and careful students of Egyptian tombs was at her disposal; but, as Professor Maspero also observes, this knowledge is constantly advancing, constantly being corrected, and the study of it, with results satisfactory to the learned, means a careful patience and accuracy far beyond the scope of the usual "literary traveller." He or she may, indeed, have the romantic imagination without which the life of that old world can hardly be reconstructed. But the necessary science is a very different thing, and the possession of this is what makes Miss Battles's work really admirable. With privilege and opportunity, many of us might "measure the last earthly couch of Fitttshopsitil, or handle the jewels and funeral furniture of Tilly." It means more to read their history, to establish their place and exact rank, even the character they bore, in the successive dynasties that ruled Egypt, and all this with the certainty of being as near the actual historical truth as modern learning will permit.

That wonderful art of embalming the poor perishing body, those coffins and tombs and statues, all the furniture and jewellery of the dead, the whole system meant to ensure immortality on earth, seemed in many cases to have failed in attaining the object aimed at. Ages ago numbers of the tombs were rifled; the marvel is that so many valuable relics have remained to be discovered in the comparatively few years since their study became a science. The portraits, the personal descriptions, the mass of detail to be found in Miss Buttles's attractive book are little short of amazing ; the extent to which this almost prehistoric history has been dis- interred can hardly be believed by any one who has not followed modern study very closely. Queens of six thousand years ago are here made to live again. Certainly Professor Maspero does not say too much when he declares that "no one could do more or better" with the available material. For, abundant as this may be, it is, of course, of so fragmentary a nature as to discourage any ordinary historian.