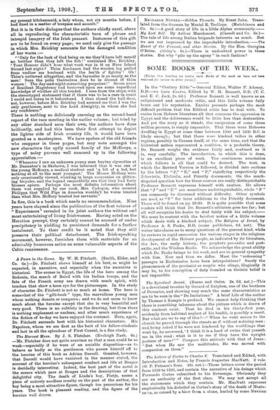 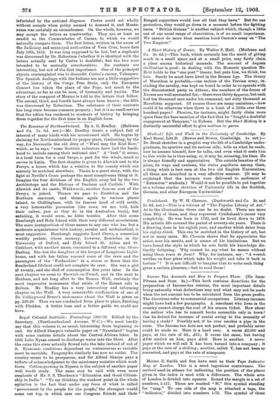 The Letters of Cortes to Charles V. Translated and Edited,

with Introduction and Notes, by Francis Augustus MacNutt. 2 vols. (G. P. Putnam's Sons. 42s. net.)—These letters cover the period from 1519 to 1526, and contain the narrative of his doings which Fernando Cortes submitted to his Sovereign. Obviously they are an authority of the first class. We may not accept all the statements which they contain. Mr. lifacNutt expresses emphatically his disbelief in Cortes's story of the death of Monte- zu---m, as caused by a blow from a stone, hurled by some Mexican

infuriated by the national disgrace. Cortes could act wholly without scruple when policy seemed to demand it, and Monte- zrima was certainly an encumbrance. On the whole, however, we may accept the letters as trustworthy. They are at least as candid as the Commentaries of Caesar, to which we would naturally compare them. The first letter, written in the name of the Judiciary and municipal authorities of Vera Cruz, bears date july 10th, 1519. It was long supposed to be lost, but a duplicate was discovered by Dr. Robertson (whether it is identical with the letters actually sent by Cortes is doubtful; but the two were intended to be mutually corroborative). Its contents are interesting, but not of the first importance. One of the principal objects contemplated was to discredit Cortes's enemy, Velasquez. The Spanish dealings with the Indians are not a little suggestive of the history of the Congo Free State, only the European Concert has taken the place of the Pope, not much to the advantage, as far as can be seen, of humanity and justice. The story of the conquest of Mexico is told in the letters that follow. The second, third, and fourth have always been known ; the fifth was discovered by Robertson. The substance of their contents has long since become common property ; but it is no small service that the editor has rendered to students of history by bringing them together for the first time in an English form.