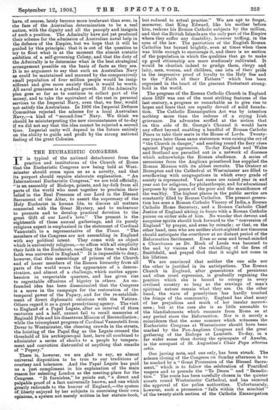 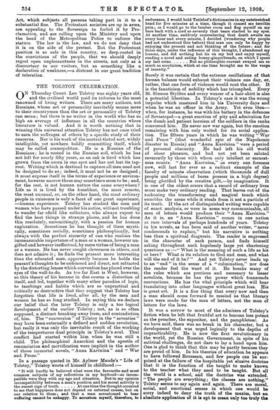 IT is typical of the national detachment from the practice and institutions of the Church of Rome that the Eucharistic Congress now being held at West- minster should come upon us as a novelty, and that its purport should require elaborate explanation. "An International Eucharistic Congress," we are told officially, "is an assembly of Bishops, priests, and lay-folk from all parts of the world who meet together to proclaim their belief in the Real Presence of our Lord in the Blessed Sacrament of the Altar, to assert the supremacy of the Holy Eucharist in human life, to discuss all matters connected with the Great Mystery, and to endeavour to promote and to develop practical devotion to the great Gift of our Lord's love." The present is the eighteenth of these annual gatherings, and its purely religious aspect is emphasised in the statement of Cardinal Vannutelli to a representative of the Times. "The members of the Congress are not assembling in England with any political intent. They come with an object which is exclusively religious,—to affirm with all simplicity their faith in the Eucharist, recalling the time when that faith was universal in England." It is impossible to deny, however, that this assemblage of princes of the Church and of lesser members of the Roman hierarohy from all parts of the world wears the appearance of a demon- stration, and almost of a challenge, which excites appre- hension in respectable quarters, and has given rise to regrettable effusions of bigotry in others. An un- founded idea has been disseminated that the Congress is a move in the campaign for the restoration of the temporal power of the Papacy, and for the re-establish- ment of direct diplomatic relations with the Vatican. Others regard it as a great proselytising agency. The visit to England of a Papal Legate, alter an interval of three centuries and a half, cannot fail to recall memories of Reginald Pole and his disastrous Mission of Reconciliation ; while the triumphant progress of Cardinal Vannutelli from Dover to Westminster, the cheering crowds in the streets, the hoisting of the Papal flag as the Legate crossed the threshold of his archiepiscopal host, have all combined to administer a series of shocks to a people by tempera- ment and conviction distrustful of anything that smacks of "Popery."

.There is, however, we are glad to say, an almost universal disposition to be true to our traditions of courtesy and tolerance. And the Papal Legate has paid us. a just compliment in his explanation of the main reason for selecting London as the meeting-place for the Congress. "It furnishes," he points out, "a direct and palpable proof of a fact universally known, and one which greatly redounds to the honour of England,—the system of; liberty enjoyed by her subjects in exercising their own opinions, a system not merely written in her statute-book, but reduced to actual practice." We are apt to forget, moreover, that King Edward, like his mother before him, reckons his Roman Catholic subjects by the million, and that the British Islands are the only part of the Empire where they suffer any disability, however trifling, in the eyes of the law. The patriotism of the English Roman Catholics has burned brightly, even at times when there was little enough to encourage it, and there is no section of the population in which the qualities that go to make up good citizenship are more studiously cultivated. It would be churlish indeed to grudge them, clergy and laity, men, women, and children, one iota of their pride in the impressive proof of loyalty to the Holy See and to the "Faith of their Fathers" which has been organised in the heart of the greatest Protestant strong- hold in the world.

The progress of the Roman Catholic Church in England since 1829 was one of the most striking features of the last century, a progress so remarkable as to give rise to hopes and fears that are equally devoid of solid founda- tion. The Catholic Emancipation Act was by intention nothing more than the redress of a crying Irish grievance. Its advocates scoffed at the notion that on this side of St. George's Channel it would have any effect beyond enabling a handful of Roman Catholic Peers to take their seats in the House of Lords. Twenty- one years later those same statesmen were raising the cry of "the Church in danger," and sending round the fiery cross against Papal aggression. To-day England and Wales and Scotland are parcelled out in a network of dioceses which acknowledge the Roman obedience. A series of secessions from the Anglican priesthood has supplied the Roman Mission with its ablest recruits. The Oratory at Brompton and the Cathedral at Westminster are filled to overflowing with congregations in which every grade of society is represented. Vast sums are raised year in and year out for religious, for philanthropic, and for educational purposes by the pence of the poor and the munificence of the wealthy. The highest places in the public service are constantly filled by Roman Catholics. The present genera- tion has seen a Roman Catholic Viceroy of India, a Roman Catholic Home Secretary, and a Roman Catholic Chief Justice of England sitting in banco with a Roman Catholics puisne on either side of him. No wonder that devout and sanguine spirits should look forward to the "conversion of England" by prayer, and even by miracle ; or that, on the other hand, men who are neither short-sighted nor timorous should anticipate the overthrow at no distant period of the Reformation Settlement. Even so sane and broad-minded a Churchman as Dr. Hook of Leeds was haunted to the end by visions of the rekindling of the fires of Smithfield, and prayed God that it might not come in his lifetime.

We are convinced that neither the one side nor the other is justified in its anticipations. The Roman Church in England, after generations of persistent and often cruel repression, is gradually regaining the position which she is bound to occupy in every civilised country so long as the cravings of man's spiritual nature remain what they are. On the other baud, the wave of proselytism has hardly touched the fringe of the community. England has shed many of her prejudices and much of her insular narrow- ness; but at the core she is as little amenable to the blandishments which emanate from Rome as at any period since the Reformation. Nor is it merely a coincidence that the same summer which witnesses the Eucharistic Congress at Westminster should have been marked by the Pan-Anglican Congress and the great gathering of the Bishops at Lambeth. To-day, in a far wider sense than during the episcopate of Anselm, is the occupant of St. Augustine's Chair Papa alterius orbis.

One jarring note, and one only, has been struck. The solemn closing of the Congress on Sunday afternoon is to be marked by a "Great Procession of the Blessed Sacra- ment," which is to follow the celebration of Pontifical vespers and to precede the " Te Deum " and "Benedic- tion. The route has been carefully chosen in the quieter streets round Westminster Cathedral, and has received the approval of the police authorities. Unfortunately, however, such a procession "falls within the mischief" of the twenty-sixth section of the Catholic Emancipation Act, which subjects all persons taking part in it to a substantial fine. The Protestant societies are up in arms, are appealing to the Sovereign to forbid it by Pro- clamation, and are calling upon the Ministry and upon the head of the Metropolitan Police to enforce the statute. The law is the law, and we do not deny that it is on the side of the protest. But the Protestant position is so safe in this country, so deep-rooted in the convictions of the people, that we should deeply regret open unpleasantness in the streets, not only as a discourtesy to our visitors, but as something like a declaration of weakness,—a distrust in our great tradition of toleration.