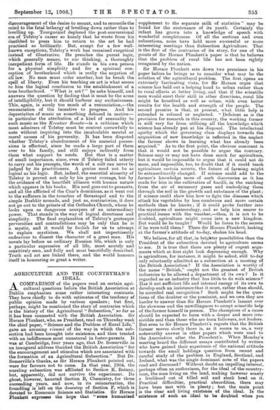 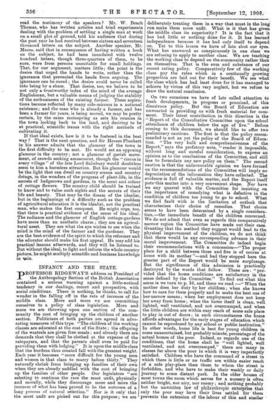 AGRICULTURE AND THE COUNTRYMAN'S IDEAL.

ACOMPARISON of the papers read on certain agri- cultural questions before the British Association at Dublin emphasises some rather interesting contrasts. They have chiefly to do with estimates of the tendency of public opinion made by various speakers ; but first, perhaps, might be mentioned the story of contraries which is the history of the Agricultural "Subsection," so far as it has been connected with the British Association. Sir Horace Plunkett, who, as President, read on Thursday week the chief paper, "Science and the Problem of Rural Life," gave an amusing resume of the way in which the sub- section had been brought into existence, and then treated with an indifference most unnatural in foster-parents. It was at Cambridge, four years ago, that Dr. Somerville in an inaugural address thanked the British Association" for the encouragement and stimulus which are associated with the formation of an Agricultural Subsection." But Dr. Somerville's thanks, as Sir Horace Plunkett pointed out, were for favours not to come. In that year, 1904, the nursling subsection was affiliated to Section K, Botany, but, apparently, did not survive the experiment. Its ghost, however, haunted Section B, Chemistry, for three succeeding years, and now, in its reincarnation, the foundling is left on the doorstep of Section F, which is devoted to Economic Science and Statistics. Sir Horace Plunkett expresses the hope that "some humanised supplement to the separate milk of statistics " may be found for the sustenance of its youth. Certainly the infant has grown into a knowledge of speech with wonderful completeness. Of all the sections and, even subsections, none have held more successful or more interesting meetings than Subsection Agriculture. That is the first of the contraries of its story, for one of the points of Sir Horace Plunkett's paper is that he believes that the problem of rural life has not been rightly recognised by the nation.

Sir Horace Plunkett sets down two premisees in his paper before he brings us to consider what may be the solution of the agricultural problem. The first, opens an extremely fascinating vista, for Sir Horace urges that science has held out a helping hand to urban rather than to rural efforts at better living, and that if the scientific men would exert their skill in other directions, rural life might be benefited as well as urban, with even better results for the health and strength of the people. The second premiss is that, at present, what little help is extended is refused or neglected. "Deficient as is the provision for research in this country, the working farmer is still very far from utilising all the knowledge which science has already put at his disposal. The intellectual apathy which the governing class displays towards the acquisition of new knowledge is reflected in the neglect the farmer shows in learning what has already been acquired." As to the first point, the obvious comment is that it would not be possible to argue the contrary. Science may or may not have done much for agriculture, but it would be impossible to argue that it could not do more, and impossible, too, to doubt that if it could teach sericulture certain secrets, the future of farming might be extraordinarily changed. If science could add to the farmer's knowledge more of such discoveries as it has made for him in the cultivation of bacilli, in the catching from the air of necessary gases and embodying them through the soil in the growth and substance of the plant ; if science could show him how to fight the diseases which attack his vegetables by less cumbrous and more certain methods than he knows ; if it could probe further into the mysteries of meteorology, and so help him nearer to practical issues with the weather,—then, it is not to be doubted, agriculture might come into a. new kingdom. But would he be taught? Would he listen to the secrets if he were told them? There Sir Horace Plunkett, looking at the farmer's attitude of to-day, shakes his head.

We believe, for all that, in brigkter possibilities than the President of the subsection devoted to agriculture seems to see. It is true that there are plenty of cogent argu- ments which at first sight look depressing enough. Why is agriculture, for instance, it might be asked, still to-day only reluctantly admitted as a subsection at a meeting of the British Association? If the Association is worthy of the name "British," ought not the greatest of British industries to be allowed a department of its own ? Is it regarded as an industry that has little to do with science? Has it not sufficient life and internal energy of its own to develop such an insistence that it must, rather than should, be accorded real recognition ? Such might be the ques- tions of the doubter or the pessimist, and we own they are harder to answer than Sir Horace Plunkett's lament over the slowness and the unwillingness to accept scientific help of the farmer himself in person. The champions of a cause should be expected to burn with a deeper and more irre- sistible zeal than those who are born followers, not leaders. But even to Sir Horace Plunkett's regrets that the British farmer moves slowly there is, as it seems to us, a very noteworthy answer in other papers which were read to the Association after the President's. When Monday's meeting heard the different essays contributed by writers who have gained their experience of the national attitude towards the small holdings question from recent and careful study of the problem in England, Scotland, and. Ireland, what was the single dominant note of the papers read and discussed? Without doubt an impelling interest, perhaps often an enthusiasm, for the ideal of the country- man, the man living on the land, making however scanty a livelihood out of tilled soil and. stock bred on it. Practical difficulties, practical absurdities, there may have been met with in plenty ; but the main point is the clear and. living existence of the ideal. Is the existence of such an ideal to be doubted when you read the testimony of the speakers ? Mr. W. Beach Thomas, who has written articles and tried experiments dealing with the problem of settling a single man at work on a small plot of ground, told his audience that during the past year he had received between sixteen and seventeen thousand letters on the subject. Another speaker, Mr. Moore, said that in consequence of having written a book on the subject, he had been inundated with twelve hundred letters, though three-quarters of them, to be sure, were from persons unsuitable for small holdings. That, for our argument, matters little; the point is the desire that urged the hands to write, rather than the ignorance that prevented the heads from arguing. The ignorance can be cured ; the desire could never be called into being by a sham. That desire, too, we believe to be not only a trustworthy index of the mind of the average Englishman, but a valuable means of judging the stability of the enthusiasms of the existing farmer. These aspira- tions become reflected by many side-mirrors in a national existence; and the man who is already a farmer, and has been a farmer for years, is being moved, we may be pretty certain, by the same mainspring as sets his cousins in the town looking back to the land, and desiring to be at practical, scientific issues with the right methods of cultivating it.

If that ideal exists, how is it to be fostered in the best way ? That is the next question, and Sir Horace Plunkett in his answer admits that the glamour of the town is the first difficulty to be met. He would set an opposing glamour in the country ; not a, glamour of garish move- ment, of crowds seeking amusement, though the "circus in every village" of the late Lord Salisbury would doubtless seem to him a harmless attraction. But his glamour would be the light that can dwell on country scenes and country doings, in the wonders of the progress of plant-life, in the secrets of hedgerows and gardens, in the scent and colour of cottage flowers. The country child should be trained to know and to value such sights and the secrets of their life and beauty. That may be the dream of the idealist, but in the beginnings of a difficulty such as the problem of agricultural education it is the idealist, not the practical man, who makes the first conquest. He might urge, too, that there is practical evidence of the sense of his ideal. The radiance and the glamour of English cottage-gardens have more than an aesthetic charm ; they are an agricul- tural asset. They are what the eye wishes to see when the mind is the mind of the farmer and the gardener. They are the best evidence of the spirit to which the reformer and. the educator should make his first appeal. He may add his practical lessons afterwards, and they will be listened to. But without the ideal, to light and inform the whole country picture, he might multiply scientific and business knowledge in main.