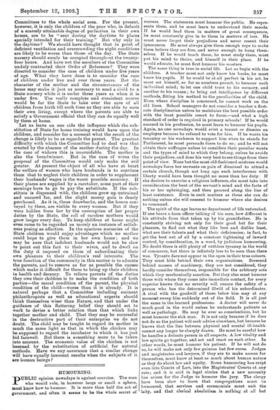 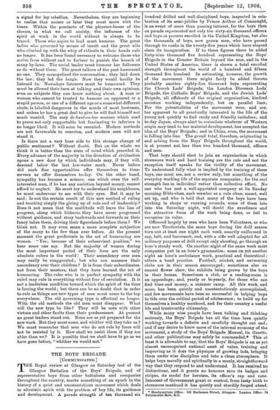 PUBLIC opinion nowadays is against coercion. The man who would rule, in however large or small a sphere, must know how to humour. It is more than half the art of government, and often it seems to be the whole secret of

success. The statesman must humour the public. He repre- sents them, and he must learn to understand their moods.

If he would lead them in matters of great consequence, he must constantly give in to them in matters of less. He must never forget their prejudices and never resent their ignorances. He must always give them enough rope to make them believe they are free, and never enough to hang them- selves. If be would teach them, he must study them, must put his mind to theirs, and himself in their place. If he would educate, he must first humour his masters.

The same thing is true in social life. Let us begin with the children. A teacher must not only know his books, be must know his pupils. If be would be at all perfect in his art, he nmst set himself, so far as numbers permit, to humour each individual mind; to let one child trust to his memory, and another to his reason ; to bring out intelligence by different methods, fitting his method to the peculiarities of the child. Even where discipline is concerned, he cannot work on the old lines. School managers do not consider a teacher a first- rate disciplinarian unless he maintains the best possible order with the least possible resort to force,—and what a high standard of order is required in primary schools! If he would succeed in his profession, he must learn to humour his pupils. Again, no one nowadays would evict a tenant or dismiss an employee because he refused to vote for him. If he wants his tenantry or his workmen to support him when he stands for Parliament, he must persuade them to do 50; and he will not obtain their suffrages unless be considers their peculiar wants and the types of mind to which they belong, unless he avoids their prejudices, and does his very best to see things from their point of view. None but the most old-fashioned mistress would nowadays force her servants on pain of dismissal to attend a certain church, though not long ago such interference with liberty would have been thought no more than her duty. • If she desires to exercise a religious influence, she mast take into consideration the bent of the servant's mind and the facts of his or her upbringing, and then proceed along the line of least resistance. Even in such matters as these she can do nothing unless she will consent to humour where she desires to command.

The spirit of the age leaves no department of life untouched. If one hears a keen officer talking of his men, bow different is his attitude from that taken up by his grandfather. He is constantly striving not only for their good but for their pleasure, to find out what they like best and dislike least, what are their talents and what their deficiencies; in fact, to get the best out of all by a constant tightening of inward control, by consideration, in a word, by judiCious humouring. No doubt there is still plenty of ruthless tyranny in the world of commerce, but there is infinitely less to be seen than there was. Tyrants dare not appear in the open in their true colours. They must bide behind their own organisations. Screened behind masses of machinery, they are not considered, they hardly consider themselves, responsible for the arbitrary acts which they mechanically sanction. But they also must humour those with whom they come into immediate contact, for every superior knows that no severity will ensure the safety of a person who has the determined illwill of his subordinates. A rival with the goodwill of those below him may at any moment sweep him suddenly out of the field. It is all just the same in the learned professions. A doctor will never do. much good in the world unless he understands patients as well as pathology. He may be ever so conscientious, but be must humour the sick man. It is not only because if he does not do so the patient will seek advice elsewhere, but because lie knows that the line between physical and mental ill-health • cannot any longer be sharply drawn. He must be careful bow - he handles a delicate person in all respects. A low vitality and low spirits go together, and act and react on each other. In other words, be must humour his patient. If he will not do so, he will make not only few guineas but few cures. Judges and magistrates and lawyers, if they are to make names for themselves, must know at least as much about human nature as they do about law and equity. Some humouring has crept even into Courts of Law, into the Magistrates' Courts at any rate; and it is said in legal circles that a new necessity has arisen for the Judge to humour the jury. The clergy have been slow to learn that congregations must be humoured, that services and ceremonials must suit the laity, and that clerical absolutism is nothing at all but a signal for lay rebellion. Nevertheless, they are beginning to realise that sooner or later they must move -with the times. Within the precincts of the pleasure-house of the classes, in what we call society, the influence of the spirit at work in the world without is always to be traced. Those who aspire to lead must humour. The great ladies who governed by . means of insult and the great wits who climbed up with the whip of ridicule in their hands rule no longer. It has been found necessary to welcome those who arrive from without and to forbear to punish the breach of many by-laws. The social leader must humour her followers or do without them. The great talkers of the past humoured no one. They monopolised the conversation ; they laid down the law ; they led the laugh. Now they would hardly be listened to. Nowadays listeners must be humoured. They must be allowed their turn at talking and their own opinions, even on subjects they can know nothing about. A man or woman who cannot be trusted to humour an opponent or a stupid person, or one of a different age or a somewhat different circle, is labelled dangerous in the minds of most hostesses, and unless he has a great deal to give be will find himself not much wanted. The easy de-haut-en-bas manner which used to prove not only supportable but fascinating to inferiors is no longer liked. It will soon be resented. Modern methods are not favourable to coercion, and modern men will not stand it.

Is there not a very base side to this strange change of public sentiment ? Without doubt. But on the whole we think it is better than the state of mind which preceded it. Every. advance of the majority in the direction of civilisation opens a new door by which individuals may, if they will, descend below the last low-water mark. Never before did such fine opportunities offer themselves to time- servers as offer themselves to-day. On the other hand, sympathy has become a science, one which even the self- interested man, if he has any ambition beyond money, cannot afford to neglect. He must try to understand his neighbours, he must endeavour to see with their eyes. But it may be said : Is not the certain result of this new method of ruling and teaching simply the giving up of rule and of leadership ? Does it not mean that the multitude will leave the line of progress, along which hitherto they have never progressed without guidance, and straybackwards and forwards as their fancy takes them, driving their figureheads before them ? We think not. It may even mean a more complete subjection of the many to the few than ever before. At the present moment the great proficients in the art of humouring are women. " Yes; because of their subservient position," we hear some one say. But the majority of women during the most important period of their lives are the only absolute rulers in the world ! Their ascendency over men may easily be exaggerated; but who can measure their ascendency over their children ? It is from their subordinates, not from their masters, that they have learned the art of humouring. The ruler who is in perfect sympathy with the ruled may rule in everything without fear of revolution. It is not a leaderless condition toward which the spirit of the time is forcing the world ; but there can be no doubt that in order to rule as things are new types of men must .come to the top everywhere. The old governing type is effectual no longer. With the old methods the old men must disappear. What will the new type be like They will be men with other virtues and other faults than their predecessors. At present no great leaders stand out. None are as yet prepared for the new work. But they must come, and whither will they take us ? We must remember that men who do not rule by force will not be resisted by it. How shall we resist them if they are abler than we ? It is possible that we shall have to go as we have gone before, "whither we would not."