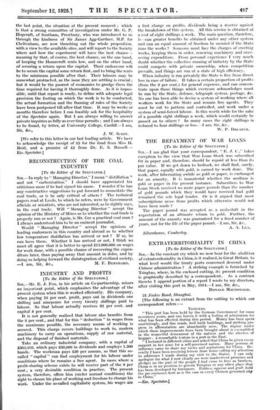 [To the Editor of the SPECTATOR.] Sia,—In the constant cry which we now hear for the abolition of extraterritoriality in China, is it realized, in Great Britain, to what level would the treaty ports concerned descend under Chinese administration ? A striking example is furnished by Tsingtao, where, in the enclosed cutting, its present condition is graphically described by a correspondent. As a contrast thereto I append portion of a report I wrote to my directors, after visiting this port in May, 1914.—I am, Sir, &c., RONALD MACDONALD. 21 Jinkec Road, Shanghai.

[The following is an extract from the cutting to which our correspondent refers :— TSINGTAO.

" This port has been held by the German Government for some seventeen years, and one leaves it with a feeling of admiration for what has been effected during this period. Money has been spent unstintingly, and fine roads, well built buildings, and striking pro- gress in afforestation are abundantly soon. The rOgime under which these improvements have been brought about is exemplified in the respectful demeanour of the natives and the absence of beggars ; a remarkable feature in a port in the East. I lectured in different cities and asked that China be given every support in her aims for a self-governed nation. Many persons of influence came to share my views and aspirations for China. Re- cently I have been receiving letters from home calling my attention to addresses I made during my visit to the States. I can only apologize for what I now clearly see were inadvertent promises and pledges on the part. of the people I had come to love as brothers. China is in no position to govern Tsingtao or any other place that has been developed by foreigners. Politics, squeeze and graft hold the pre-eminence here as is the case in every Chinese governed city in China."