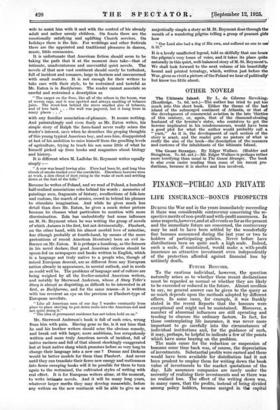 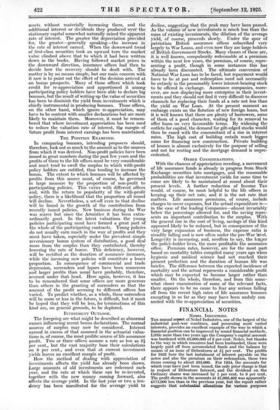 DURING the War and in the years immediately succeeding it there was considerable controversy concerning the re- spective merits of non-profit and with-profit assurances. In some respects,however,and at all events so far as the present and the immediate future are concerned, the controversy may be said to have been settled by the wonderfully fine bonuses announced during the last year or two to holders of participating policies. Never before have distributions been on quite such a high scale. Indeed, such a scale, if maintained, would make a with-profit insurance an attractive investment even independently of the protection afforded against financial loss by untimely death, FUTURE BONUSES.

To the cautious individual, however, the question naturally arises as to whether these recent declarations must be regarded as normal or whether they are likely to be exceeded or reduced in the future. Almost needless to say, no general answer can be given to the query as so much depends upon the methods adopted by different offices. In some cases, for example, it was frankly stated in the recent Reports that the bonuses were exceptional and might not be maintained. Moreover, a number of abnormal influences are still operating and tending to obscure the ordinary factors. In fact, for those contemplating life insurance, it was never more important to go carefully into the circumstances of individual institutions and, for the guidance of such, it may, perhaps, be helpful to indicate a few of the points which have some bearing on the problem. The main cause for the reduction or suspension of bonuses some time back was, of course, the depreciation of investments. Substantial profits were earned and these would have been available for distribution had it not been prudent to employ them for- writing down the book value of investments to the market quotations of the day. Life assurance • companies are rarely under the necessity of realizing their investments and so there was no realized loss. The effect of the writing down was, in many cases, that the profits, instead of being divided among policy holders, became merged in the capital assets, without materially increasing them, and the additional interest or dividends they produced -over the stationary capital somewhat naturally raised the apparent rate of interest. The greater the depreciation provided for, the greater—generally speaking—the increase in the rate of interest earned. When the downward trend- of first-class securities took an upward turn the market' value climbed above that to which it had been written down in the books. Having followed market prices in the downward direction, insurance offices had then to decide how the recovery should be dealt with. The matter is by no means simple, but our main concern with it now is to point out the effect of the decision arrived at on bonns 'prospects. Many of those offices' which took credit for re-appreciation and apportioned it among participating policy holders have been able to declare big bonuses, but the result of writing up the value of securities, has been to diminish the yield from investments which is chiefly instrumental in producing bonuses. Those offices, on the other hand, which ignore re-appreciation, may, have to be content with smaller declarations but are more likely to maintain them. Moreover, it must be remem- bered that where investment appreciation has been used to reduce the valuation rate of interest,' the margin. of future profit from interest earnings has been maintained.

In comparing bonuses, intending proposers should, therefore, look not so much to the amount as to the sources from which it was derived. Non-profit policies have been issued in great numbers during the past few years and the profits of them to the life offices must be very considerable and must tend to swell the surplus to which with-profit policy holders are entitled, thus tending to increase the bonus. The extent to which bonuses will be affected by profits from this source must, of course, be governed in large measure by the proportion of non-profit to participating policies. This varies with different offices, and, with the return to popularity of the with-profit policy, there is a likelihood that the proportion all round will decline. Nevertheless, a set-off even to that decline will be found in the growth of the contribution from recently issued policies. New business during the War was scarce but since the Armistice it has been extra- ordinarily good. In the latest valuations the young policies participating must have formed a great part of the whole of the participating contracts. Young policies do not usually earn much in the way of profits and they - must have taken, especially under the prevalent simple reversionary bonus system of distribution, a good deal more from the surplus than they contriblited, thereby lowering the rate of bonus. This deficiency, however, will be rectified as the duration of assurance increases, while the incoming new policies will constitute a lesser proportion. In consequence of commercial ' and trade depression, surrenders and lapses have been numerous and larger profits than usual have probably, therefore, accrued under that head. Here again, however, it has to be remembered that some offices are more generous than others in the granting of surrenders so that the amount of the profit accruing to different offices has varied. To predict whether, as a whole, these surrenders will be more or less in the future, is difficult, but it must be hoped that they will be less, for terminations of this kind are, on general grounds, to be deplored.

The foregoing are what might be described as abnormal causes influencing recent bonus declarations. The normal sources of surplus may now be considered. Interest earned in excess of that assumed in the actuarial valua- tions is, of course, the most prolific source of life assurance profit. Two or three offices assume a rate as low as 2i per cent., but the vast majority base their calculations on 8 per cent., and even that at current investment yields leaves an excellent margin of profit. How the method of dealing with appreciation of investments affects the yield has already been shown', Large amounts of old investments are redeemed each Year, and the rate at which these can be re-investedl together with the new money coming forward, also affects the average yield. In the last year or two a ten- dency has been manifested for ihe average ' yield to decline, suggesting that the peak may have been passed. As the volume of new' investments is much less than the mass of existing investments, the dilution of the average yield, of course, proceeds slowly. Under the spur of patriotism British assurance offices subscribed very largely to War Loans, and even now they are large holders of British Government Stocks. Many classes of these are, it is well known, compulsorily redeemable at a premium within the next few years, the premium, of course, repre- senting a profit, though in some instances this has already been discounted. The ultimate conversion of National War Loan has to be faced, but repayment would have to be at par and redemption need not necessarily be entirely in the presumably lower interest-bearing stock to be offered in exchange. Assurance companies, more- over, are now displaying more enterprise in their invest- ments and they should not find it very difficult to discover channels for replacing their funds at a rate not less than the yield on War Loan. At the present moment an embargo exists on the flotation of new foreign loans, but it is well known that there are plenty of borrowers, some of them of a good character, waiting for its removal to offer loans on very favourable terms. By widening the outlets for capital, the demand for gilt-edged stocks would then be eased with the concomitant of a rise in interest rates. The high cost of building entails much bigger sums for financing new construction. Private building of houses is almost exclusively for the purpose of selling and not for renting and the mortgage demand is unpre- cedented.

With the chances of appreciation receding, a movement of life assurance funds is already in progress from Stock Exchange securities into mortgages, and the reasonable probabilities are that investment yields for some time to come are likely to be maintained at round about their present levels. A further reduction of Income Tax would, of course, be most helpful to the life offices. in keeping up their -net rate, and it is the net rate that matters. Life assurance premiums, of course, include charges to cover expenses, but the actual expenditure is— in the case of the leading Companies—almost invariably below the percentage allowed for, and the saving repre- sents an important contribution to the surplus. With the general rise in the cost of living, savings of this kind appeared likely to be reduced, but in consequence of the very large expansion of business, the expense ratio is steadily falling and is now often under the pre-War level. Longevity is increasing, and, needless to say, the longer the policy-holder lives, the more profitable the assurance office. Premium rates, however, are for the most part based on mortality tables compiled many years ago when hygienic and medical science had not reached their present perfection and the duration of human life was briefer. The difference between the expected incidence of mortality and the actual represents a considerable profit which may be expected to become larger rather than smaller. On the whole, therefore, and from this some- what closer examination of some of the relevant facts, there appears to be no cause to fear any serious falling off from the recent high rates of life assurance bonuses excepting in so far as they may have been unduly con. nected with the re-appreciation of securities.