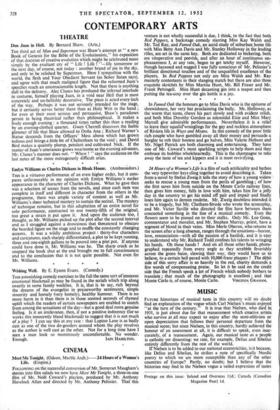 Meet Me Tonight. (Odeon, Marble Arch.)-24 Hours of a Woman's Life. (Empire.) FOLLOWING on the successful conversion of Mr. Somerset Maugham's stories into film salads we now have Meet Me Tonight, a three-in-one film of Mr. Noel Coward's playlets, produced by Mr. Anthony Havelock Allan and directed by Mr. Anthony Pelissier. Thai' this venture is not wholly successful is due, I think, to the fact that both Red Peppers, a backstage comedy starring Miss Kay Walsh and Mr. Ted Ray, and Fumed Oak, an acrid study of suburban home life with Miss Betty Ann Davis and Mr. Stanley Holloway in the leading roles, are set in the same key. Both are dedicated to bickering, both are vituperative and peevish, and after an hour of continuous un- pleasantness I, at any rate, began to get tetchy myself. However, though harassed and nagged I was fully conscious of Mr. Pelissier's brilliant directional touches and of the unqualified excellence of the players. In Red Peppers not only are Miss Walsh and Mr. Ray masterly contestants in their slanging match but there are also three exquisite sketches by Miss Martita Hunt, Mr. Bill Fraser and Mr. Frank Pettingell. Miss Hunt decanting gin into a teapot and then putting the tea-cosy over the gin bottle is a joy.

In Fumed Oak the honours go to Miss Davis who is the epitome of shrewishness, her very hat proclaiming the bully. Mr. Holloway, as the worm that turns, chews his part slowly and with evident relish, and both Miss Dorothy Gordon as adenoidal Elsie and Miss Mary Merrall give admirable performances. Nevertheless it is a relief to leave their squalid*wranglings for the gay and reckless atmosphere of Riviera life in Ways and Means. In this comedy of the poor little rich couple who have gambled away all their money and persuade a burglar to rob their hostess and go halves, Miss Valerie Hobson and Mr. Nigel Patrick are both charming and entertaining. They have one of Mr. Coward's most sparkling scripts to help them and they embrace its bubbles wholeheartedly. This is the champagne to take away the taste of tea and kippers and it is most revivifying.

24 Hours of a Woman' s.Life is a film of such artificiality and bathos the very typewriter keys cling together to avoid describing it. Taken from a novel by Stefan Zweig it tells the story of how a young widow seeks to rescue a young man from the perils of gambling ; of how she first saves him from suicide on the Monte Carlo railway lines, then gives him money, falls in love with him, takes him for a jolly day in the country to get his mind off pair and impair and finally loses him again to demon roulette. Mr. Zweig doubtless intended it to be a tragedy, but Mr. Chetham-Strode who wrote the screenplay, and Mr. Victor Saville who directed the film have between them concocted something in the line of a musical comedy. Even the flowers seem to be pinned on to their stalks. Only Mr. Leo Genn, commentator and moralist, and Mr. Stephen Murray, priest, have a segment of blood in their veins. Miss Merle Oberon, who returns to the screen after a long absence, ranges through the emotions—horror, love, renunciation—with all the passion of a basilisk, and it is easy to understand why Mr. Richard Todd confines his talents to wringing his hands. Oh those hands ! And oh all those other hands, photo- graphed repeatedly from every angle as they scrabble feverishly across the green - baize, clawing their way, they would have us to believe, to a certain hell paved with 10,000 franc plaques ! The kbit side of this sorry affair is so heavily in the red, charity demands a few words of compensating praise. So let it be said on the credit side that the French speak a tot of French which nobody bothers to translate • that much of the photography is excellent and that Monte Carlo is, of course, Monte Carlo. VIRGINIA GRAHAM.