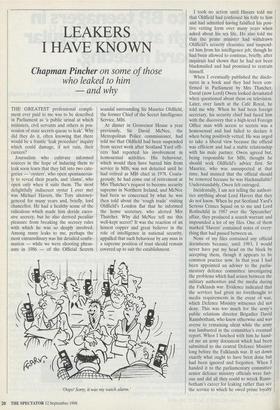 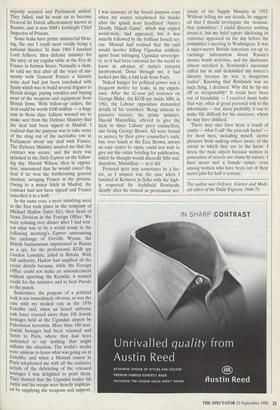 LEAKERS I HAVE KNOWN

THE GREATEST professional compli- ment ever paid to me was to be described in Parliament as 'a public urinal at which ministers, civil servants and others in pos- session of state secrets queue to leak'. Why did they do it, often knowing that there would be a frantic 'leak procedure' inquiry which could damage, if not ruin, their careers?

Journalists who cultivate informed sources in the hope of inducing them to leak soon learn that they fall into two cate- gories — 'oysters', who open spontaneous- ly to reveal their pearls, and 'clams', who open only when it suits them. The most delightfully indiscreet oyster I ever met was Michael Havers, the Tory attorney- general for many years and, briefly, lord chancellor. He had a healthy sense of the ridiculous which made him deride exces- sive secrecy, but he also derived peculiar pleasure from breaking the secrecy rules with which he was so deeply involved. Among many leaks to me, perhaps the most extraordinary was his detailed confir- mation — while we were shooting pheas- ants in 1986 — of the Official Secrets scandal surrounding Sir Maurice Oldfield, the former Chief of the Secret Intelligence Service, MI6.

At dinner in Grosvenor House a year previously, Sir David McNee, the Metropolitan Police commissioner, had told me that Oldfield had been suspended from secret work after Scotland Yard offi- cers had reported his involvement in homosexual activities. His behaviour, which would then have barred him from service in MI6, was not detected until he had retired as MI6 chief in 1978. Coura- geously, he had come out of retirement at Mrs Thatcher's request to become security supremo in Northern Ireland, and McNee had been so concerned by what he was then told about the 'rough trade' visiting Oldfield's London flat that he informed the home secretary, who alerted Mrs Thatcher. Why did McNee tell me this well-kept secret? It was the reaction of an honest copper and great believer in the role of intelligence in national security, appalled that such behaviour by any man in a supreme position of trust should remain covered up to suit the establishment.

Vops! Sony, it was my watch alarm.' I took no action until Havers told me that Oldfield had confessed his folly to him and had admitted having falsified his posi- tive vetting form over many years when asked about his sex life. He also told me that the prime minister had withdrawn Oldfield's security clearance and suspend- ed him from his intelligence job, though he had been allowed to continue, briefly, after inquiries had shown that he had not been blackmailed and had promised to restrain himself.

When I eventually published the disclo- sures in a book and they had been con- firmed in Parliament by Mrs Thatcher, David (now Lord) Owen looked devastated when questioned about them on television. Later, over lunch at the Café Royal, he told me why. When he had been foreign secretary, his security chief had faced him with the discovery that a high-level Foreign Office man with access to secrets was a homosexual and had failed to declare it when being positively vetted. He was urged to take a liberal view because the official was efficient and had a stable relationship with his male partner. Owen agreed but, being responsible for MI6, thought he should seek Oldfield's advice first. Sir Maurice, who was unsuspected at that time, had insisted that the official should be removed because he was blackmailable! Understandably, Owen felt outraged.

Incidentally, I am not telling the authori- ties anything about Lord Havers that they do not know. When he put Scotland Yard's Serious Crimes Squad on to me and Lord Rothschild in 1987 over the `Spycatcher' affair, they produced a search warrant and impounded a lot of my files. One of them marked 'Havers' contained notes of every- thing that had passed between us.

None of my files contained any official documents because, until 1983, I would never have put my head on the block by accepting them, though it appears to be common practice now. In that year I had been appointed an adviser to the parlia- mentary defence committee investigating the problems which had arisen between the military authorities and the media during the Falklands war. Evidence indicated that the services had given no forethought to media requirements in the event of war, which Defence Ministry witnesses did not deny. This was too much for the army's public relations director Brigadier David Ramsbotham, who knew otherwise and was averse to remaining silent while the army was lambasted in the committee's eventual report. When I lunched with him he hand- ed me an army document which had been submitted to the central Defence Ministry long before the Falklands war. It set down exactly what ought to have been done but had been ignored and forgotten. When I handed it to the parliamentary committee senior defence ministry officials were furi- ous and did all they could to wreck Rams- botham's career for leaking rather than see the service to which he owed prime loyalty unjustly accused and Parliament misled. They failed, and he went on to become General Sir David, affectionately known as Rambo, and is now HM's forthright Chief Inspector of Prisons.

Some leaks have prime ministerial bless- ing, the one I recall most vividly being a national disaster. In June 1964 I lunched Lord Jellicoe, then defence minister for the navy, at my regular table at the Ecu de France in Jermyn Street. Normally a clam, he told me that after all the years of ani- mosity with General Franco a historic arms deal had just been concluded with Spain which was to build several frigates to British design, paying royalties and buying most of the weapons and equipment from British firms. With follow-up orders, the deal could be worth £100 million — a huge sum in those days. Jellicoe warned me to make sure from the Defence Ministry that the deal had been signed in Madrid. I realised that the purpose was to take some of the sting out of the inevitable row in Parliament about any deal with Franco. The Defence Ministry assured me that the contract was secure, and the story was splashed in the Daily Express on the follow- ing day. Harold Wilson, then in opposi- tion, announced that he would cancel the deal if he won the forthcoming general election, savaging Franco in the process. Owing to a minor hitch in Madrid, the contract had not been signed and Franco cancelled it in a huff.

In the same year, a more satisfying meal at the Ecu took place in the company of Michael Hadow (later Sir), then head of News Division in the Foreign Office. We were relaxing over dinner after I had writ- ten what was to be a world scoop in the following morning's Express announcing the exchange of Greville Wynne, the British businessman imprisoned in Russia as a spy, for the professional KGB spy Gordon Lonsdale, jailed in Britain. With full authority, Hadow had supplied all the secret details because, while the Foreign Office could not make an announcement Without upsetting the Kremlin, it wanted credit for the initiative and to beat Pravda to the punch.

Sometimes, the purpose of a political leak is not immediately obvious, as was the case with my modest role in the 1976 Entebbe raid, when an Israeli airborne task force rescued more than 100 Jewish hostages held at the Ugandan airport by Palestinian terrorists. More than 160 non- Jewish hostages had been released and flown to Paris, where they had been instructed to say nothing that might inflame the situation. The world's media were anxious to know what was going on at Entebbe, and when a Mossad source in Paris telephoned me with all the exclusive details of the debriefing of the released hostages I was delighted to print them. They showed that the Ugandan leader Idi Amin and his troops were heavily implicat- ed by supplying the weapons and support. I was unaware of the Israeli purpose even when my source telephoned his thanks after the splash story headlined `Amin's Deadly Hijack Game', which was copied world-wide, had appeared, but it was smartly followed by the brilliant Israeli res- cue. Mossad had realised that the raid would involve killing Ugandan soldiers, apart from infringing Ugandan sovereign- ty, so it had been essential for the world to know in advance of Amin's terrorist involvement. Done through me, it had looked just like a bad leak from Paris.

Naked hunger for political power was a frequent motive for leaks, in my experi- ence. After the 42-year jail sentence on George Blake, the KGB spy inside MI6, in 1961, the Labour opposition demanded details of his treachery. Being anxious to preserve secrecy, the prime minister, Harold Macmillan, offered to give the facts to three Labour privy counsellors, one being George Brown. All were bound to secrecy by their privy counsellor's oath, but, over lunch at the Ecu, Brown, always an easy oyster to open, could not wait to give me the entire briefing for publication, which he thought would discredit MI6 and, therefore, Macmillan — as it did.

Personal spite may sometimes be a fac- tor, as I suspect was the case when I lunched at Kettners in Soho with the high- ly respected Sir Archibald Rowlands, shortly after he retired as permanent sec- retary of the Supply Ministry in 1953. Without telling me any details, he suggest- ed that I should investigate the 'nomina- tion committee'. I could discover nothing about it, but my brief report disclosing its existence appeared on the day before the committee's meeting in Washington. It was a super-secret British-American set-up to exchange information about Russia's atomic bomb activities, and my disclosure almost wrecked it. Rowlands's successor called me in and demanded my source's identity because he was 'a dangerous traitor'. Knowing that Rowlands was no such thing, I declined. Why did he tip me off so irresponsibly? It could have been out of friendship — I received many leaks that way, often at great personal risk to the informants — but, more probably, it was to make life difficult for his successor, whom he may have disliked.

There may also have been a touch of vanity — what I call 'the peacock factor' — for most men, including myself, derive pleasure from making others aware of the extent to which they are in the know. I stress the male aspect because women in possession of secrets are clams by nature. I have never met a female oyster, even among women who have been out of their secret jobs for half a century.

The author was Defence, Science and Medi- cal editor of the Daily Express 1946-73.