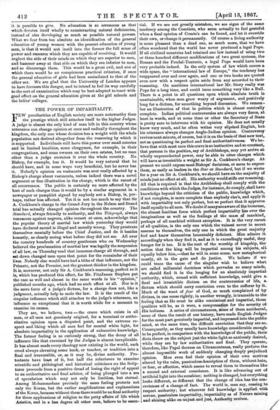 THE POWER OF IMPARTIALITY.

12EW peculiarities of English society are more noteworthy than r the prestige which still attaches itself to the higher Judges. A judge is almost the only kind of man left in this country whose utterance can change opinion at once and radically throughout the kingdom, the only one whose decision has a weight with the whole population not derived altogether from the reasoning by which it is supported. Individuals still have this power over small coteries and in limited localities, some clergymen, for example, in their congregations, and some owners on their own estates, but no man other than a judge exercises it over the whole country. No Bishop, for example, has it. It would be very natural that he should have, and in some ways very beneficial, but he never has it. Nobody's opinion on vestments was ever really affected by a Bishop's charge about vestments, unless indeed there was a novel argument or fine illustration in the charge, which is the rarest of all occurrences. The public is certainly no more affected by the best of such charges than it would be by a similar argument in a newspaper or pamphlet signed by anybody not a Bishop, is, per- haps, rather leas affected. Yet it is not too much to say that Sir A. Cockburn's charge to the Grand Jury in the Nelson and Brand trial has actually changed opinion throughout the country. The Standard, always friendly to authority, and the Telegraph, always venomous against negroes, alike recant at once, acknowledge that the popular theory of martial law which yesterday they would have declared sacred is illegal and morally wrong. They prostrate themselves mentally before the Chief Justice, and do it besides honestly, as clearly seeing what before they did not see. All over the country hundreds of country gentlemen who on Wednesday believed the proclamation of martial law was legally the suspension of all law, on Thursday read that immense charge all through, and eat down changed men upon that point for the remainder of their lives. Nobody else would have had a tithe of that influence, not the Primate, not the Premier, not the greatest thinker in the kingdom. It is, moreover, not only Sir A. Cockburn's reasoning, perfect as it is, which has produced this effect, for Mr. FitzJames Stephen put the case as well and almost in the same words in his "opinion," published months ago, which had no such effect at all. Nor is it the mere force of a judge's dictum, for a charge does not, like a judgment, actually help to make the law. It is the result of the singular influence which still attaches to the judge's utterance, an influence so exceptional that it is worth while for a moment to examine its causes.