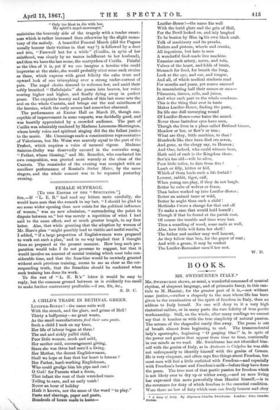 [To 'THE EDITOR OF THE "SPECTATOR."] "L. E. B." had read my letters more carefully, she would have seen that the remark in my last, "I should be glad to see some wider opening than now exists for the political influence of women," was no new admission, "surrendering the point in dispute between us," but was merely a repetition of what I had said to the same effect, and at much greater length, in my first letter. Also, that while granting that the adoption by women of Mr. Hare's plan "might possibly lead to visible and useful results," I added, "if a large proportion of Englishwomen were prepared to work out such a plan," and in no way implied that I thought them so prepared at the present moment. How long such pre- paration would take I do not presume to suggest, but that it would involve an amount of mental training which 71111.8i take con- siderable time, and that the franchise would be unwisely granted without such previous training, seems to me as clear as the cor- responding truth, that the franchise should be conferred when such training has done its work.

Tp the rest of "L. E. B.'s " letter it would be easy to reply, but the common ground between us is evidently too small to make further controversy profitable.—I am, Sir, &c., S. D. C.