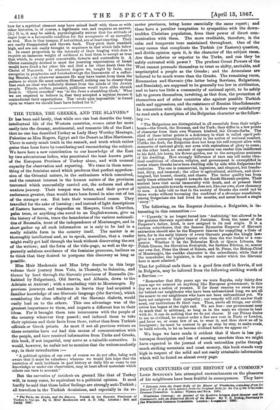 THE TURKS, THE GREEKS, AND THE SLAVONS.*

IT has been. said lately, that while men can best describe the busy, intellectual life of the Western countries, women enter far more easily into the dreamy, sentimental, and romantic life of the East ; that no one has described Turkey as Lady Mary Wortley Montagu, Palestine as Miss Rogers, Egypt and the Desert as Miss Martineau. There is surely much truth in the remark, and truth which rather gains than loses force by considering and reconsidering the subject. We have here a new contribution to oar knowledge of the East by two adventurous ladies, who penetrated the least known parts of the European Province of Turkey alone, and with unusual

capacity for observation and reporting. We trace in them some- thing of the feminine mind which produces that perfect apprehen- sion of the Oriental nature, in the enthusiasm which conceived, and the constant interest in the human nature of the provinces traversed which successfully carried out, the arduous and often anxious journey. Their temper was better, and their power of endurance greater, than would have been found in nine out of ten of the stronger sex. But here their womanhood ceases. They travelled for the sake of learning ; and instead of light descriptions of Eastern harems, or rhapsodies on Mosques, Greek Churches, palm trees, or anything else novel to an Englishwoman, give us the history of Servia, trace the boundaries of the various nationali- ties of Roumelia, treat of the independence of Montenegro, and in short gather up all such information as is only to be had in a really reliable form in the country itself. The matter is so thoroughly intellectual and, so to speak, masculine, that a reader might really get half through the book without discovering the sex of the writers ; and the form of the title-page, as well as the ap- parently sedulous avoidance of the feminine pronouns, inclines us to think that they desired to postpone this discovery as long as possible.

Miss Muir Mackenzie and Miss Irby describe in this large volume their journey from Volo, in Thessaly, to Salonica, and thence by land through the Slavonic provinces of Roumelia (in- habited by Bulgarians), Old Servia, and Albania, down to the Adriatic at Atttivari ; with a concluding visit to Montenegro. By previous journeys and residence in Servia they had acquired a familiar knowledge of one Slavonic language (the Servian), which considering the close affinity of all the Slavonic dialects, would easily lead on to the others. This one advantage was of the greatest importance to them, and imparts a different hue to their ideas. For it brought them into intercourse with the people of the country wherever they passed ; and induced them to take their opinions and their facts from these, rather than from Turkish officials or Greek priests. As most if not all previous writers on these countries have not had this means of communication with the people, and have received information from Turks and Greeks,

this book, if not impartial, may serve as a valuable corrective. It would, however, be unfair not to mention that the writers modestly say, in their introduction :—

" A political opinion of our own of course we do not offer, being well aware that it must be valueless ; whereas we would fain hope that the narration of such incidents in past history or daily life as come to our knowledge or under our observation, may at least afford materials which others can turn to account."

But the narration of incidents on ground like that of Turkey will, in many cases, be equivalent to a politicial opinion. It need

hardly be said that these ladies' feelings are strongly anti-Turkish ; all travellers in the Turkish dominions, and especially in its re-

• The Turks, the Greeks, cud the Masons. Travels in the Slavonic Provinces or Wimbledon Common : an Account of the Qiestion between Lord Spencer and the Turkey in Fain pe. By G. ilulr Mackenzie and A. P. Irby. Loudon : Bell and Commoners. with an Historical &ads of the Manor. By T. R Bishop, Secretary to

moter provinces, bring home essentially the same report ; and these have a peculiar temptation to sympathize with the down- trodden Christian population, from their power of direct coin- munication with them. The more creditable, therefore, is the calm and temperate tone maintained throughout. One of the many causes that complicate the Turkish (or Eastern) question, and divide opinion upon it, is the character of the subject races. Are these inferior or superior to the Turks, and can they be safely entrusted with power ? The prudent Great Powers of the West cannot persuade themselves to trust so shifty, excitable, and unprincipled a people as the Greeks ; and the Armenians are believed to be much worse than the Greeks. The remaining races, Roumanian and Slavonic (the latter being Servians, Bulgarians, and Bosniaks), are supposed to be generally too low in civilization, and to have too little a community of national spirit, to be safely left to govern themselves, involving, as that does, the protection of themselves and of other countries also against possible Turkish raids and aggressions, and the resistance of Russian blandishments. In connection with this subject, it is therefore very satisfactory to read such a description of the Bulgarian character as the follow- ing :—

" The Bulgarians are distinguished in all essentials from their neigh- bours—the Greek, the Ronman, and the Turk; they differ in a few points of character from their own Western kindred, the Croato-Serbs. The chief of these latter points is a deficiency in what is called esprit poll- ague, and a corresponding superiority in the notion of national comfort. Unlike the Serb, the Bulgarian does not keep his self-respect alive with memories of national glory, nor even with aspirations of glory to come ; on the other hand, no amount of oppression can render him indifferent to his field, his horse, his flower-garden, nor to the scrupulous neatness of his dwelling. How strongly difference of race can tell under iden- tical conditions of climate, religion, and government is exemplified in towns where Greeks have been dwelling aide by side with Bulgarians for centuries. The one is commercial, ingenious, and elognentrbut fraudu- lent, dirty, and immoral ; the other is agricultural, stubborn, and slow- tongued, but honest, cleanly, and chaste. The latter quality has from early times attracted respect towards the South Slavonic peoples. Their ancient laws visit social immorality with death, and_ at present their opinion, inexorable towards women, does not, like our own, show clemency to mon. A lady told us that in the society of Greeks she could not be three weeks without becoming the confidant of a chronigue scandaleuse, among Bulgarians she had lived for months, and never heard a single 'story.'"

The following, on the Emperor Justinian, a Bulgarian, is in- teresting in this connection:—

" Upravda ' is no longer forced into 'Aufrichtig,' but allowed to be the genuine Slavonia equivalent of Justinian. Even the name of the Emperor's father, Istok, is now assigned to its real origin. It is a curious coincidence, that the famous Byzantine Emperor of Slavonic extraction should also be the Emperor famous for compiling a Code of laws, for in the early history of every Slavonic people the kingly laws giver is a person of higher repute even than the war leader or a cone queror. Whether it be the Bohemian Krok or Queen Libussa, the Polish Greens, the Slovakian Svatoptuk, the Serbian D ashen, or, nearer our own day, Peter the Great of Russia, and St. Peter, the Bishop-Chief of Montenegro, the warlike character is the subordinate, while that of the remodeller, the legislator, is the aspect under which the Slavonic hero is most admired.'

That for political ends there is a good firm stuff in Servia, if not in Bulgaria, may be inferred from the following striking words of a Servian :—

" Remember that fifty years ago we were Rayahs, only thirty-five years ago we entered on anything like European government; to this day we are a nation of yeomen. If for these reasons we seem to you far behind our neighbours who have been enfranchised long, we are all the nearer to our neighbours who have not been enfranchised yet. We have not outgrown their sympathy ; our remedy will still answer their need, our institutions fit their case. Then, above all things, our civili- zation has begun at the right end. We are free : our government may do much that is arbitrary, so long as in the main we choose to bear with it; it can do nothing that we do not choose. If our Prince desire to see us civilized, he cannot order a fine new coat in Paris or London, and force us, or some few of us, to wear it, and thus show 1113 Off to foreigners ; he must be content to go on step by step, to make roads, to build schools, to let us become civilized before we appear so."

We hope we have made it evident that if there is less pic- turesque description and less of amusing anecdote than we might have expected in the journal of such untrodden paths through much striking mountain and coast scenery, this book stands very high in respect of the solid and not easily attainable information which will be found on almost every page.