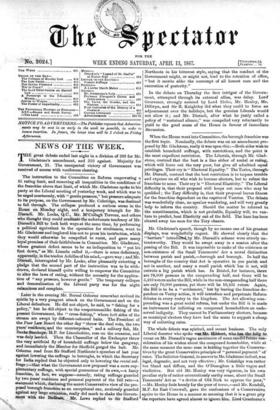 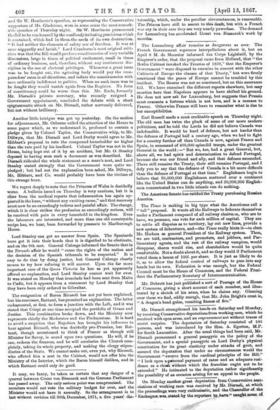 The whole debate was spirited, and meant business. The only

Liberal deserter who spoke wall Mr. *Wert, who AM MO 104 to count on Mr. Disraeli's vague assurances of some candid future con- sideration of his wishes about the compound householder, while at the same moment the same man is holding together the Conserva- tives by the great Conservative principle of "personal payment" of rates. The Solicitor-General, in answer to Mr. Gladstone indeed, was legal, dogmatic, and not very effective ; Mr. Coleridge was rather too bland and diffuse, and the O'Donoghue a little vague and vindictive. But old Mr. Henley was very vigorous, in his own peculiar style of rather ostentatiously earthy sense, about the Small Tenements' Act as "a device of Old Nick to oppress the poor," —Mr. Henley feels keenly for the poor of towns,—and Mr. Kendall, M.P. for East Cornwall, gave the confessions of a Conservative squire to the House in a manner so amusing that it is a great pity the reporters have agreed almost to ignore him. Lbrd Cranbome's