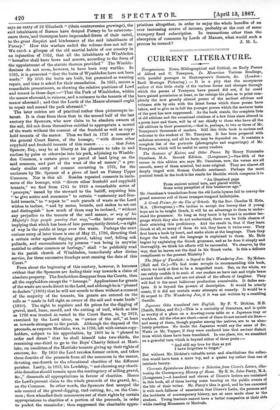 Tennysoniana. Notes, Bibliographical and Critical, on Early Poems of Alfred and C. Tennyson, In Memoriam Various Readings, with parallel passages in Shakespeare's Sonnets, ec.c. (London : Basil Montagu Pickering.) — It is a pity that the anonymous author of this little study of the various forms and changes through which the poems of Tennyson have passed did not, if he could have gained permission at least, so far enlarge his plan as to print com- pletely the now greatly altered poems of the earliest editions and volumes side by side with the latest forms which these poems have taken, and to give us in full the younger poems which the maturer taste of the poet has now suppressed. As the book stands, the complete lists of old editions and the occasional citations of a few lines since altered in a poem here and there, will be of use chiefly to those who have all the old editions in their possession,—that is, perhaps, to two or three of Mr. Tennyson's thousands of readers. Still this little book is curious and welcome to the student of Mr. Tennyson. It has been prepared with sedulous accuracy, and all its facts, may be depended on. It contains a complete list of the portraits (photographs and engravings) of Mr. Tennyson, which will be useful to many readers.