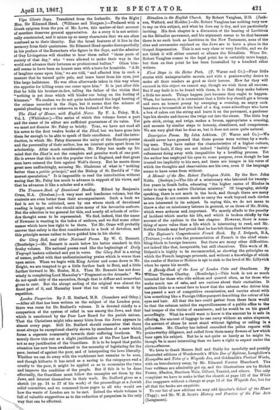 A Memoir of the Rev. Robert Turlington Noble. By the

Rev. John Noble. (Seeleys.)—The life of a missionary who laboured for twenty- five years in South India, educating "the higher castes of Hindus in order to raise up a native Christian ministry." Of biography, strictly speaking, there is not much in the book, and though there are many letters they do not contain mach to carry the work beyond such circles as are interested in its subject. In saying this, we do not mean to throw a slur on missionary labours in general, or on those of Mr. Noble, which were arduous and., important. We merely allude to the paucity of incident which marks his life, and which is broken chiefly by the account of the cyclone in the last chapter. However, there is some- thing of more value than a life which is interesting to read, and Mr. Noble's friends may feel proud that he has left them that better memory.