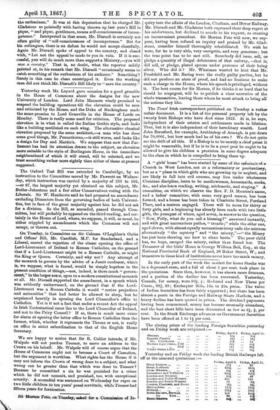 On Tuesday, in Committee on Sir Colman O'Loghlen's Oaths and

Offices' Bill, Mr. Candlish, 111.P. for Sunderland, and a Liberal, moved the rejection of the clause opening the office of Lord-Lieutenant of Ireland to Roman Catholics, on the ground that if a Lord-Lieutenant might be a Roman Catholic, so might the King or Queen. Certainly, and why not ? Any attempt of the monarch to govern by the advice of a Jesuit confessor, which is, we suppose, what is feared, would be simply hopeless in the present condition of things,—nor, indeed, is there much " govern- ment," in the larger sense, open to a modern constitutional monarch at all. Mr. Disraeli supported the amendment, in a speech which was evidently embarrassed, on the ground that if the Lord- Lieutenant was a Roman Catholic it would "revive prejudices -and animosities" that had better be allowed to sleep, but he -acquiesced heartily in opening the Lord Chancellor's office to Catholics. Yet is it not a fact that under a recent Act the appeal in Irish Ecclesiastical cases lies to the Lord Chancellor of Ireland, and not to the Privy Council'? If so, there is ranch more cause for alarm at opening the latter office to Roman Catholics than the former, which, whether it represents the Throne or not, is really an office in strict subordination to that of the English Home Secretary.