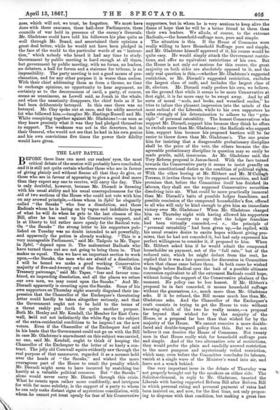 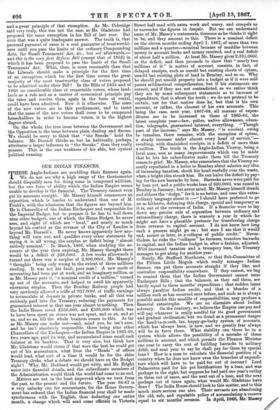 BEFOBE these lines can meet our readers' eyes, the most .1,11 critical debate of the session will probably have concluded, .and it is still not quite certain whether those who are in favour -of giving plainly and without finesse all that they do give, or • those who are in favour of appearing to give a good deal more than they expect any one to receive, will carry the day. This is only doubtful, however, because Mr. Disraeli is finessing with his usual ability and his usual unscrupulousness for the -aid of two sections of the House who could not vote with him -on any avowed prineiple,—those whom in Sybil he elegantly called "the Sneaks" who fear a dissolution, and those • Radicals whom he is luring on by vague and indefinite hopes of what he will do when he gets to the last clauses of the Bill, after he has used up his Conservative support, and is at liberty to bid rather more openly for the Radical vote.

One very important issue in the debate of Thursday was not properly brought out by the speakers on either side. The Solicitor-General, in reply to Mr. Gladstone, taunted the Liberals with having supported Reform Bill after Reform Bill in which personal rating and personal. payment of rates had been insisted on, and now, for the first time, not only propos- ing to dispense with that condition, but making a great fuss and a great principle of that exemption. As Mr. Coleridge said very truly, this was not the case, as Mr. Gladstone had proposed the same exemption in his Bill of last year. But even that was a quite inadequate answer. The truth is, that personal payment of rates is a real guarantee of trustworthi- ness until you pass the limits of the ordinary Compounding Acts, the Small Tenements' Act, &c., but not afterwards,— and this is the very first Reform Bill (except that of 1852) in which it has been proposed to pass the limits of the Small Tenements' Act. What, then, is more reasonable than that the Liberals should make a principle for the first time of an exemption, which for the first time covers the great majority of the most trustworthy class of voters proposed to be admitted under their Bill? In the Bills of 1854 and of 1860 no considerable class of respectable voters, whose land- lords as a rule and as a matter of economical principle pay the rates and receive them again in the form of rental, could have been admitted. Now it is otherwise. The mass of the new voters are in this predicament, and to insist that the mass of the new voters shall cease to be compound householders in order to become voters, is in the highest degree absurd.

On the whole, the true issue between the Government and the Opposition is the issue between plain dealing and finesse. We should be sorry to think that "the Sneaks" hold the balance. Mr. Disraeli thinks so, but he habitually, perhaps, attributes a larger influence to "the Sneaks" than they really possess. This is the one weakness of his able, but cynical political cunning.